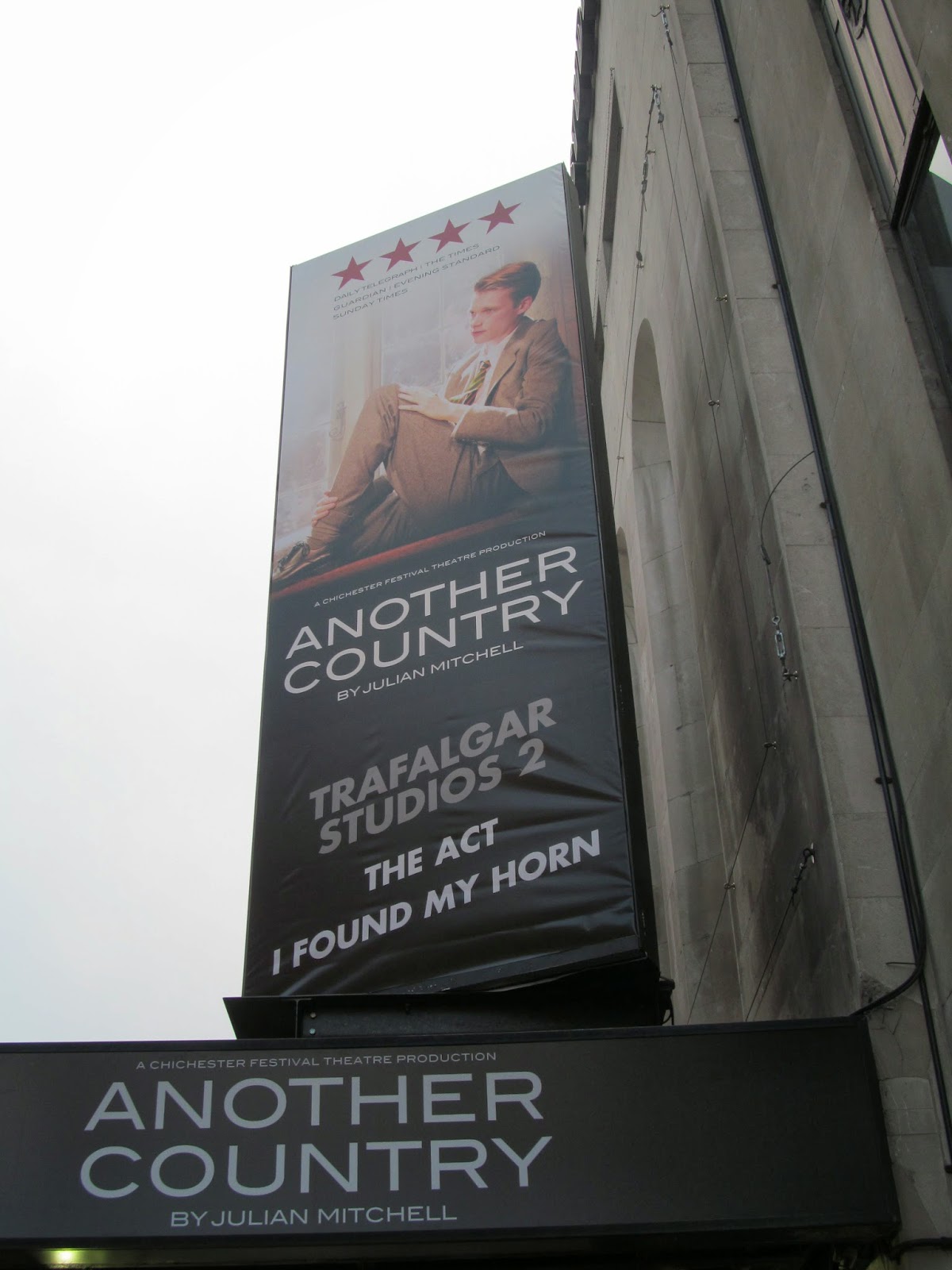 Another Country at Trafalgar Studios, London

Julian Mitchell's Another Country is currently on at London's Trafalgar Studios.  It's directed by Jeremy Herrin and produced by Chichester Festival Theatre.  The Play is set in the 1930s and is about two public school boys, Bennett (played about Rob Callendar) and Judd (played by Will Attenborough) whose sexuality and Marxist beliefs respectively have had on their lives being pupils of an English Public School.  The school's double standards and its hypocrisy are exposed throughout the play.  The story is in similar vein to Guy Burgess, a British political spy who had contacts with the former Soviet Union.  Bennett's and Judd's thoughts and feelings are explored in this environment.  Their public school seemed to be Another Country to both of them as they considered themselves different and, to an extent, marginalised from the social expectations, rules and hierarchy among teachers and pupils.  One learns how the public school institutions aren't really what the outside world perceives them to be.  The general Status Quo is how highly these schools are thought of with their credentials, reputations, rich traditions, etiquette and rules.

The 1930s were turbulent times politically with the aftermath of the Great Depression, the public spending cutbacks and in the instability of the British Government.  Many, including public school pupils, felt disillusioned with the political climate which suggested the rise of radical political views including being sympathetic to Marxism and Communism.  Also homosexuality in the 1930s was illegal but activity was commonplace and seemed tolerated in public schools as long as it was behind 'closed doors'.  Pupils eventually, when leaving school and/or university, were pursuing traditional and conservative values in main stream society however it was a very different story out of the Public's and media's eyes.

Having radical political beliefs and sexual encounters in public schools were commonplace but at the same time they feared potential scandals which could have been leaked to the outside world with potential repercussions which could affect the reputation and the school's prestige.  Pupils would manipulate one another to ensure their school's high profile was maintained amongst the 'psychological hypocrisy' (James Parris).

Both Bennett and Judd stood up to their principles.  Judd believed the oppression of the school's system was responsible for the number of scandals including the tragedy at the beginning of the play.  He wasn't prepared to participate in supporting this system through extra curriculum activities though challenged from peer pressure.  Ultimately, the school's system with its double standards disappointed both Judd and Bennett for being true to themselves.  Both of them came to the conclusion that the school and British system, in general, relies on appearances and puts a lot of emphasis on this than what really happens 'inside'.

This is so true in today's society and parallel to 'Another Country' through the media and individuals eventual exposure of stories of similar settings.  Many were unaware about Guy Burgess and John Cornfield until their exposures decades later.  Also one thinks of Eddie Chapman, a double agent, who won the highest war honour in Nazi Germany during World War II.  Today one can think of the news headlines of Julian Assange and Edward Snowden for their international espionage suggesting similar reasons.

The play concludes with Bennett and Judd re-evaluating their lives especially being inspired by Vaughan Cunningham's (played by Julian Wadham) visit to the school and shared his ideological beliefs.  Bennett concluded in his last words that society will never be 'heaven on earth' but hope for 'an adjusted earth on earth'.

Julian Mitchell discussed how he wanted to focus on the characters' feelings of being in a public school instead of their ideologies and existing traditions.  It seems that individual feelings and creativity in these instiutions are usually never taken in account but suppressed. Instead one is expected to conform to the system's thoughts and policies.  It isn't any different today as many people feel 'foreign' and 'unattached' because of society's double standards and the emotional and psychological impacts it has on the individual.  Human nature is complex and the societies one has to serve in are subjective.  Everyone are victims of a society where human nature often clashes with prescriptive traditions and societal values even if one tries their best to make the world they live in better or improve oneself.  Life is never clear cut with no universal definitive answers.

In all it was an excellent play with an incredible cast of 10 talented performers.  They acted (and sang) exceptionally well on stage.  I loved Peter McIntosh's and Paul Pyant's school room with its wooden panelling sets on stage with soft lighting.  Trafalgar Studios is a perfect place for this play to be performed with its cosy and intimate setting.  However the nature of the play and its theme were anything but!

I highly recommend Another Country and it's an opportunity for the viewer to delve deep in life's and humans' contradictions and complexities whether good or bad depending on one's view.

Please check out the website for the show's schedule and ticket information.