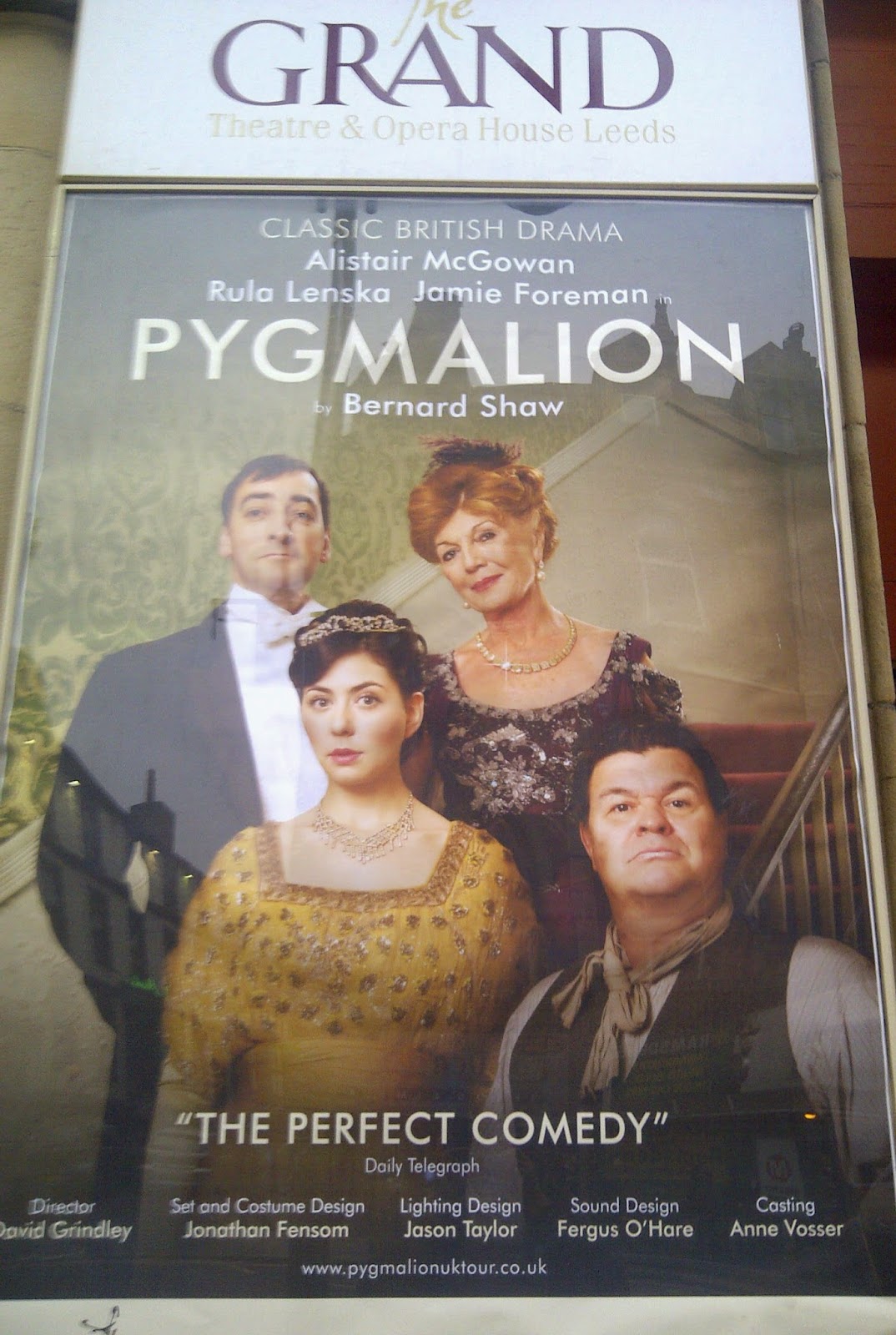 Pygmailon at the Grand Theatre, Leeds


I had the opportunity to see Bernard Shaw's Pygmalion at my local theatre, Leeds Grand.  Not only it was an excellent production directed by David Grindley but I was upgraded to front row in the stalls.  Bernard Shaw wrote the play in 1912 and it was premiered on stage in 1914 just before the first world war.  There has been a number of adaptations over the last century including the musical, My Fair Lady, which is loosely based on the play.  This production is to mark the centenary of when Pygmalion, based on the Greek mythological character, is about Henry Higgins (Alistair McGowan), a phonetics expert, training Eliza Doolittle (Rachel Barry), a flower girl, to pass as a 'duchess' in High Society though the art of speech.

Shaw wrote the play with an authorial voice to express his desire to see full equality in society without a class system where wealth, education, gender, appearances and, most certainly, how one talks are assessed.  He had seen, during the Edwardian times, the contrasts between the rich and poor.  The wealthy were getting wealthier and yet London's working class lived in some of the worse socially deprived areas.  Women, specially, had it tough in society especially with employment.  Compared to men, they would worker longer hours for poorer wages.  This led to many turning to prostitution which offered better wages and less hours.  At the time Shaw wrote his play, the Suffrage Movement, reached a crucial stage.  Women have been fighting for reforms including the right to vote.  Key players including Emmeline Pankhurst fought very hard along with increased independence since the Women's Property Act in the late 19th Century.

Like the women of the Suffrage movement Eliza Doolittle fought her right of independence by earning from her flower sales and surviving on the London streets with dignity.  It was openly demonstrated when she expressed her contempt to how Mr Higgins treated her with his experiment.  Shaw's message was making the English language accessible and he believed how this would break down the barriers.  Notable progress was made with the Education Reforms Act in 1870.

The conclusion is certainly refreshing and directed well in this production.  Eliza's progress. through the training of speech and phonetics gave her opportunities, which were rare for women, to pursue a career.  Shaw was keen that Eliza had those choices and proves that application of phonetics and speech can break up Britain's traditional systems.  Many had hoped that Henry Higgins and Eliza Doolittle would marry and live happily ever after just like the myth of Pygmalion.

This production has an excellent and talented cast with Alistair McGowen (loved his portrayal as Henry Higgins); Rachel Barry (a wonderful Eliza Doolittle); Paul Brightwell (as Colonel Pickering); Charlotte Page (Mrs Pearce and who I've seen as Christine, The Phantom of the Opera, back in 1999); James Forman (Mr Doolittle and starred in East Enders on television) and Rula Lenska (Mrs Higgins and truly a legend). The production's creative Team is made up of designers Jonathan Frenson (set and costume); Jason Taylor (lighting); Fergus O'Hare (sound) and the help of Majelle Hurley (dialect coach).

An excellent production which is highly recommended.  Further information about the UK Tour including venues can be found via the official website.