Harrogate Theatres is hosting Aladdin for their Christmas pantomime.  An annual custom for many local theatregoers!

Collaborated, for the 7th time, by David Bown and Phil Lowe and Lowe's 9th time directing a Harrogate pantomime.  There is an exciting line up with Tim Stedman as Wishee Washee for his 16th appearance in a Harrogate Pantomime.  Harrogate Youth Theatre's Hannah Margerison will play Pandora and Tom Peters will play Abanazer/Emperor of China.

Pantomimes are very popular in Harrogate so you're best booking - sooner the better! Opens from Tuesday 1st December 2015 and will run until Sunday 17th January 2016 and bookings can be made here.  The pantomime will be part of the exciting sparkly festive season for many and also marking the New Year!

There is always Dick Whittington next year if you're unable to make Aladdin!


By Dawn Smallwood
On behalf of Local Theatre Blogging Community


Posted by Dawn Smallwood at 12:44 No comments:

This review was originally written for North West End which can be accessed here.


Leeds University Union Music Theatre presents an amateur production of Ghost – The Musical at the University’s Riley Smith Hall. The musical is based on the 1990 Blockbuster film which stars the late Patrick Swayze, Demi Moore, Whoopi Goldberg and Tony Goldwyn.
The synopsis is about two young lovers, Sam Wheat and Molly Jenson, who move to New York City. One fateful night changes their lives forever and the only connection, from that point forward, is for Sam, who still exists in the world but as a ghost, is to employ Oda Mae Brown to forewarn Molly the dangers ahead.

The staging is simple and indeed effective throughout the performance. There is great use of the technological visuals and lighting for the backdrop that synchronises the scenes such as the moving subway train with New Yorkers, played by the ensemble, commuting during rush hour.
The creative use of sounds though loud apply appropriately for Sam’s attempts to connect from one world to another and disappearances including Carl’s are disguised with strobe lighting and smoke. The clever transition from Oda Mae Brown to Sam works in the penultimate scene, Unchained Melody dance scene.

The audience receives moving performances from the cast including the three principals; Sam McCagherty (Sam Wheat), Anna Carley (Molly Jenson) and Sophie Rush (Oda Mae Brown). McCagherty and Carley successfully ride this romantic journey with their indirect connection through the present world and the next one.

The performance begins with the optimistic Here Right Now; the heartfelt and moving Three Little Words just before that fateful moment; and Oda Mae Brown and company energetically sing the colourful gospel sounding Are You a Believer?Contrasting themes such as trust/betrayal, optimism/pessimism and hope/jeopardy are explored in Suspend My Disbelief/I Had A Life when Sam, Molly and Carl (Adam Jones) summarise their lives at the end of the first Act.

In Act II there is the rapping of Focus by the Subway Ghost and the show stopping I’m Outta Here. All these popular musical numbers set to Dave Stewart’s music and Glen Ballard’s lyrics. Of course there is the infamous Unchained Melody which is synonymous to the film.

Leeds University Union Music Theatre with its exceptional cast and talented crew has collectively put together this successful amateur production which certainly makes an enjoyable and entertaining evening.


Posted by Dawn Smallwood at 12:14 No comments: 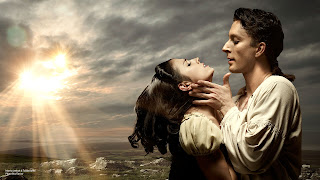 
Emily Bronte's Wuthering Heights is an exceptional classic loved by many.  It is known for its passionate and romantic tale between Heathcliff and Cathy Earnshaw.  One appreciates the classic later on as there are a lot of complex emotions features yet to be explored.  Wuthering Heights is a story not to be followed literally with the hope of an expected ending.  However one is encouraged to explore its complex characters and its raised emotive themes including obsession, jealously, revenge, loneliness, anger, insecurity and equality.

Northern Ballet's Wuthering Heights is visiting a few venue during its Autumn 2015 tour. Set to Claude-Michel Schonberg's music; the talented artists interpret the classic on stage with simple but incredible sets from Ali Allen and David Nixon's humble but effective costumes.  The company did an excellent job interpreting the complex characters from the novel.  Antoinette Brookes-Daw and Ashley Dixon re-enact the passion and strong emotions that Heathcliffe and Cathy had for each other with excellent interpretation and dancing.

Personally I felt something was missing from this production...I didn't feel as emotive as I expected to from the novel.  Hats off to Northern Ballet and their renowned valiant effort to reinterpret a complex classic and its characters. A lot to pack in for a two and a quarter hour ballet and perhaps there was a lot of editorial decisions being made to interpret the classic on stage in that amount of time.

Seeing this production has made me appreciate Wuthering Heights even more and the lives the Bronte sisters have had.  A revisit to the Bronte's parsonage is in order as my intrigue about the infamous sisters continue to grow.  It's the 200th anniversary of Charlotte Bronte's birth next year so I'm looking forward to seeing Northern Ballet's World Première, Jane Eyre. 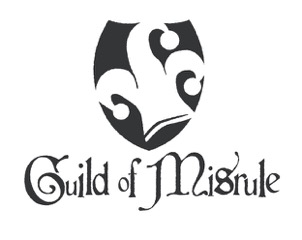 Guild of Misrule is bringing F Scott-Fitzgerald's The Great Gatsby to this unique venue which is renowned for its art space and pop up pub.

This production is none like it with the story being told room to room across the building's three floors.  A combination of performance, installation and maximum audience participation who make up the characters will be the production's ingredients.  Not to mention the cocktails and late nights!

The excess of excesses will be expected at The Fleeting Arms during December (From the 3rd to the 31st) courtesy of Jay Gatsby.  Supporting this production will be played by actors who have featured in a number of local productions including Romeo and Juliet at St Olave's Church and The Railway Children at the Signal Box Theatre (National Railway Museum).


Dawn Smallwood
On behalf of the Local Theatre Blogging Community
Posted by Dawn Smallwood at 13:00 No comments:

Rambert - Alhambra Theatre, Bradford (On behalf of The Reviews Hub) 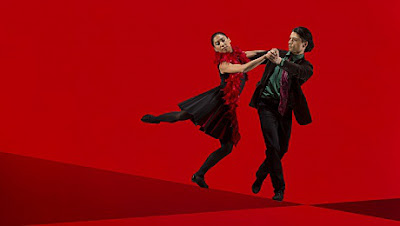 (Image contributed and accessed from http://www.thereviewshub.com)
Rambert brings their triple bill of works to Bradford’s Alhambra Theatre. The evening begins with Mark Baldwin’s Dark Arteries set against Gavin Higgins’ music and assembled on stage is the infamous Carlton Main Frickley Colliery Band.
Dark Arteries is a dark piece of work where stories of stories are fully expressed.  Inspired by the 30thanniversary of the 1984/85 miners’ strike, this work explores the emotive journey and livelihoods of the close knit mining communities.  Deep brass musical orchestration opens up the depths of the community with slow paced and silhouetted dancing.
Simultaneous dancing takes place by the company’s artists and movements are synchronised when performed in groups, trios and duets.   The continuation makes one think of solidarity, a strong attribute in the mining communities during tough times of change.
The final scene presents the flexibility of the dancers and their ability to create intricate positions, interpretative of the raised themes and experiences to Higgins’ musical composition.
Shobana Jeyasingh’s Terra Incognita is a piece where the dancers certainly discover their unknown habitats.  Firstly, a smoke filled stage and soundscapes of nature create an atmosphere where dancers explore in synchronisation foreign spaces and existences, which are done with slick choreography.
The dancers dance in union to the music, collectively symbolising intrigue while the subsequent heightened paces represents familiarisation.  The dancers’ nomadic existences are noticed from the simultaneous entrances and exits from the stage.
The musical shift in Gabriel Prokofiev’s composition reflects the individuals’ journeys, including their determination to embrace intrigue and suspense of an unknown place, to settling in.  This colourful and reflective piece of work encourages the audience to think literally and symbolically about their existences and purposes.
Last but not least, is Rooster, the main feature of this triple bill.  Christopher Bruce’s choreography is set to several of the Rolling Stones’ songs.  Rooster celebrates the swinging sixties with sharp and sassy courtship dances by the company.
Miguel Altunaga leads a light hearted entertaining interpretation to Little Red Rooster.  The audience is treated to a variety of dancing such as the beautiful classical interpretation by a solo dancer to Ruby Tuesday to the energetic and dynamically fast paced ensemble dancing to Play With Fire.
The red and black costumes the dancers wear reflect the figurative meanings and context from the songs, while Bruce’s choreography reflects the social changes and society during the 1960s and 1970s.
This lively work concludes Rambert’s reflective and refreshing triple bill.  Each piece of work is enjoyably unique with modern themes.  Particularly memorable are the performers who take pride in their dancing these exciting works.

Posted by Dawn Smallwood at 23:44 No comments:

Proper Job, an award winning theatre company, presents Nosferatu at Halifax's Square Chapel.  Based on Ian McMillan's poems, the company recites numerous poems about the tale of the sailors in Bram Stoker's Dracula who made the perilous journey from Varna to Whitby. 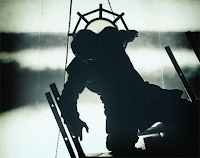 Image credit: Proper Job
(Accessed http://www.properjob.org.uk)
,
The audience are invited to observe life on deck and be intrigued with the unidentified cargo.  The atmospheric staging suits the sinister mood for what is about to happen.

The lighting and smoke creates this suspense with the mysterious deaths on board.  The lighting and soundscapes serve chillingly the vampire's existence on ship with great use of vampire images, red lighting that represents blood and dimness which is appropriate for this telling of this dark tale.

Certainly a production remembered for its stage effects, the live music and good use of metaphoric language in the text and songs.  An imaginative approach for telling a dark tale which is something Proper Job takes pride in with their productions.


Posted by Dawn Smallwood at 22:51 No comments: