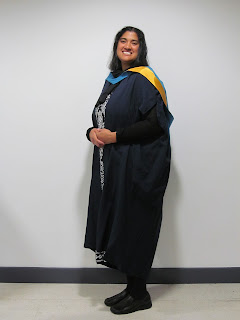 I've decided to dedicate this blog on my graduation day for my BA Honours degree in Humanities with English Language!  The graduation ceremony took place on 15th March 2013 and is one of the most important days of my life.  What it a journey it has been! Six years of distance learning part time with the Open University.  Holding a degree will open up opportunities which had been previously closed to me.


Anyway, I'll share my day.  The day began the night before after I had seen 'The Mousetrap' at The Leeds Grand, my parents picked me up and we drove to our hotel in Harrogate, North Yorkshire.  We stayed in the Montpellier Quarter, one of the oldest quarters in the town centre.

The following morning, my parents took me to Betty's for breakfast.  We thoroughly enjoyed the food and the presentation and quality are exceptional.  It isn't a cheap experience but worth it for a special occasion.  We returned to the hotel to get ready for the graduation ceremony.  After checking out we walked a short distance to the Harrogate International Centre where I registered and got adorned in my gown.

The ceremony was good even if it was a bit long winded for over 300 graduates to be congratulated by one of the Vice Chancellors.  Professor Ronald Carter received an honorary degree.  This was of interest to me because I studied quite a lot of his works on the development and creativity of the English Language in my final modules.  I had the honour of meeting him in person after the ceremony. 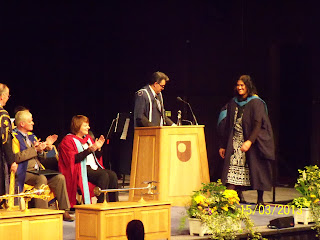 After refreshments we made our way home with an impromptu stop at a local restaurant for some dinner.  We reflected what an amazing day it has been and definitely I'm very happy and proud!  I look forward to planning my next life journeys when I'm ready!

I waited in anticipation to see New Adventure's production of Matthew Bourne's Sleeping Beauty.  Sleeping Beauty was my very first ballet I saw, back in 1993, and produced by the English National Ballet.  I'm not a big fan of ballet even if I'll make an exception for Swan Lake and I'm always selective about seeing a specific ballet.  This is dependent on how the story and themes are interpreted.

This review is mainly subjective, not descriptive, so hopefully there shouldn't be any spoilers for those who are planning to see it but haven't yet.

I love how the story is narrated on the stage at the beginning and in between acts/scenes.  It was a nice touch so the audience doesn't lose touch of the plot!  The story is told chronically from the development of Gothicism, from the Romantic Movement at the beginning of the 19th Century,  to the modern times of the 21st Century.  It didn't compromise the unrequited love between Aurora (Ashley Shaw) and Leo (Dominic North).  It is cleverly choreographed and directed perfectly.

I love the use of colours used on stage to feature the Gothicism and darkness along with the chosen moods for the scenes.  It was a down to earth realistic interpretation of a 'classic'.  Matthew Bourne isn't afraid of being different and it's not just restricted to literally interpreting the classical story with the wonderful score of Tchaikovsky.

I thoroughly enjoyed the production. I found the production refreshing as the usual classical ballet based on the well known story doesn't appeal to me.  I think Bourne's aim is to reach out to new audiences.

Some theatre etiquette couldn't have gone amiss to an annoying family who sat not far behind me.  They were rustling from unwrapping sweets, chatting throughout, banging seats and making unnecessary stops to the toilets.  This ruin the silent mood required for some of the dance acts and I had no choice but to complain to the usher during the interval.  I have a good mind to do a blog about theatre etiquette as the issue seems to be getting worse whenever I go to the theatre and I'm getting fed up of it!

On a positive note, I'm intrigued to see some more of New Adventures/Matthew Bourne's productions in the future.

You can find out more information about the company and their productions via their website here.

Posted by Dawn Smallwood at 15:54 No comments:

Liverpool has a special place in my heart.  There is something magical about the city and I always look forward to returning.  I couldn't think of seeing anything more special than see Phantom there! It also worked out that seeing Phantom was exactly a year to the date when I first saw the UK Production for the first time in Plymouth.


On arrival in Liverpool I met up with my friends, Leni and Sabine whom I had the pleasure spending time with whilst in the city.  We stayed in Albert Dock, an ideal base for the sights and attractions even if it was bit of a walk to and from the railway station and the Empire Theatre!

It was great checking out the sights around Albert Dock. Sabine and I spent a morning at the Merseyside Maritime Museum and we visited the 'Titanic and Liverpool - The Untold Story' Exhibition.  I always wanted to see the exhibition and was glad to have taken the opportunity.  The exhibition was a powerful, emotive and moving exhibition which displayed real life stories of those who were on the Titanic.  I was close to tears and in all an excellent exhibition!  A rare comfort I learnt there were no cats on the ship but still very tragic in all other perspectives.  It affected Liverpool profoundly because the Titanic was registered in the city and a lot of the crew were Liverpool residents.  We also saw the permanent exhibition of the other doomed ships, Lusistania and Empress of Ireland.

Leni spent her time at the Beatles Story Museum which she enjoyed. In all it was a good morning for our musuem fix.  After our fix we had a wander on Pierhead and saw some of the sights connected to the Titanic such as St James's House, the former White Star Line Office, and the Titanic Monument which was built in honour and memory of the engineer room staff hereos who lost their lives when the ship sank. 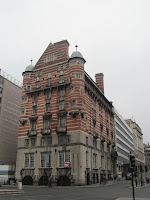 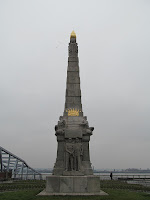 The first evening I saw the Les Mis movie at Liverpool One's Odeon whilst Leni and Sabine had their Phantom fix at the Empire Theatre.  I was tempted to see Phantom but decided to see Les Mis again the cinema instead.  Loved the movie even more on my 4th visit and now looking forward to the DVD. 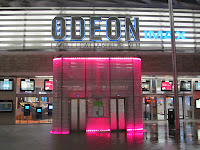 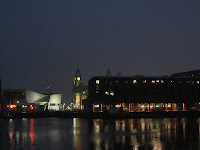 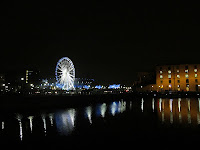 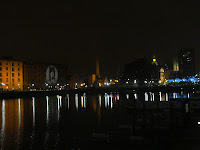 I have been waiting to see Phantom in Liverpool since booking my ticket in June 2012.  The evening arrived and we braved the wet and cold weather to reach the Empire Theatre.  I was very pleased with my front row ticket. I never sat front row stalls seat for Phantom before so this was a first! Apart from not seeing their feet, the stage was high, I had a great close up view of the performers.

On my 56th visit (my 18th visit of the tour) we had most of the principals on including Earl Carpenter, Simon Bailey, Angela Cesar and we had Olivia Brereton as Christine (6th time seeing her on the tour).  I was even more moved by Earl's and Olivia's portrayals of Phantom and Christine respectively especially during Music of the Night when Christine offered the mask back to The Phantom.

After the show we braved the cold and did the usual stage door rituals.  We managed to catch Earl briefly and Sabine took a photo of me with him.  It was great to catch up with most of the cast especially Angela and Olivia.  Olivia and I were recalling when we met last time which was in Leeds on the evening of when we had the evacuation!  I missed David Phipps-Davies as he was on holiday but look forward to seeing him in Birmingham.  It was also great to catch up with Petra again, whom I met last year in Edinburgh, and we all took some friendship photos after the rituals.

Phantom in the City! 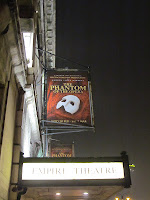 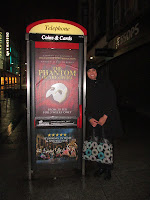 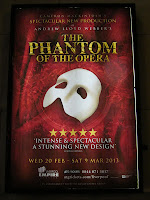 On the Saturday morning I bid farewell to Leni and Sabine who were continuing their Phantom adventures in London and I made my way to Liverpool Central Sation for a train to Port Sunlight on the Wirral Pennisula.  I always wanted to visit Port Sunlight, a preserved historic village and famed for the production of Sunlight Soap (now part of Unilever).  The founder of Sunlight soap and philanthrophist, William Lever, chose the village for his soap production and his workers. 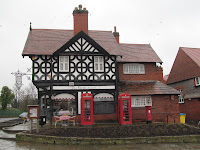 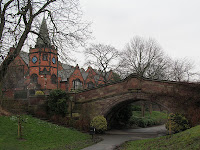 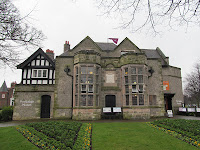 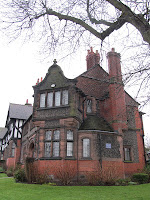 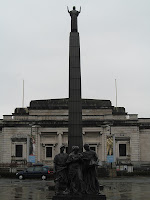 I spent a few hours admiring the historic buildings and preserved landscapes.  I enjoyed visiting Port Sunlight Village Museum including Lever's vision in providing more than work for his employees and its fascinating how his social vision influenced greatly future generations.

Before returning to Liverpool I paid a visit to Lady Lever Art Gallery which was founded by Lever and I enjoyed mooching around and specially enjoyed The Lever the Collector display.  I was inspired by what Lever said that 'Art can be to everyone an inspiration.  It is within the realm of all of us...' (Lever, 1922, Lever Art Gallery)

It was a pity it rained during my visit but it didn't spoilit for me.  I would love to return in the summer and enjoy the village's landscape in bloom.  In all it was a good day and return to Liverpool happy.  Before catching my train home I met up with Annie, Kathy, Olaf and again Petra for a coffee after they saw Phantom.  It was nice chatting about Phantom and sharing our unequited love for our favourite show!

This trip was full of happy memories and hope these will continue on on future travels.  Next and final stop of the Phantom UK Tour....Birmingham!