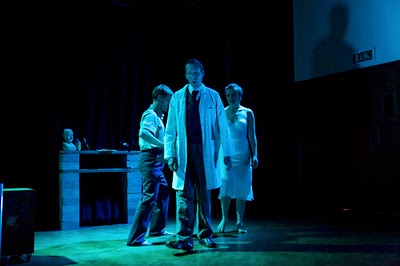 Influenced by 1950s Film Noir and George Orwell's 1984, this thriller is adapted by Square Peg Theatre.  Written and directed by Michael White it tells a story of The Man (played by the author himself) who wakes but he is claimed convincingly by Dr Atwell (played by Phil Minns).  The play explores themes of delusion, mental health issues, dystopia, fact and fiction.


The cinematic style, Square Peg Theatre is known for, is used effectively with the silent pauses which create suspense and mystery of what is going to happen next.  The physical movement projects the story boldly and aesthetically to the thriller's era.  The dim and subdued lighting creates a sinister feel which are associated with Alfred Hitchcock's thrillers.  This is an enjoyable one hour play hosted well in an intimate space.

Please check Square Peg Theatre for more information about the production including tour dates by clicking on the link.
Posted by Dawn Smallwood at 18:21 No comments: