Leeds Arts Centre presents Liz Lochhead’s Blood and Ice this week at the Carriageworks Theatre.  Directed by Camilla Asher, the production gives the audience an insight into the life of Mary Shelley, author of Frankenstein, and to see how the classic was conceived and developed over 200 years ago.

It is fitting for this production to appear in its 200th year anniversary of the publication of Frankenstein.  The mood is set at the beginning as the audience enters into a darkened space and the two act play switches between the different time periods of Mary’s life; with her creation of the "creature" being never far away in her thoughts and silhouettes in the background.   There is an introduction to the characters  who played a big role in the author’s life including Percy Bysshe Shelley (Ben Hopwood), Claire Claremont (Hannah Robbins) and Lord Bryon (Joe Saxton) and how their personalities influenced choices that Mary has to make.  The trio replicates such key scenarios.

Mary opens up and shares her tragedies including the deaths of her babies and how she and Percy were ostracised from society because of their romantic and political beliefs.  Frankenstein was written at the height of the Romantic era where thoughts, inherited from The Enlightenment, and expressions were intertwined though not necessarily encouraged by society in general particularly the upper class. Frankenstein is considered parallel to Mary’s life and the production certainly explores this and how Mary is prompted to reflect beyond and think deeper than she never has done before.

The staging is simple but the draped backdrop is effective with images of Henry Fuseli, a Romantic painter, which reminds the audience of its era.  The lighting and soundscapes compliments the moods portrayed through the play.

This is an enjoyable production and the cast thoroughly put their awe and energy into a story that is just a relevant today as much as it was 200 years ago; particularly with the themes such as gender and woman’s role in society.  Blood and Ice figuratively sums up Mary’s life and her creation from the tragedies including death to the strong character she develops from experiencing delusion, disappointment and loneliness.

Blackeyed Theatre is currently presenting Frankenstein which is touring round the country. This world première production is adapted by John Ginman and based on Mary Shelley's Classic Gothic Thriller.  The story centres on Vincent Frankenstein, whose passions are to find the secrets to nature and its philosophies which is combined with his soul searching initiatives.  Then one dark day in November his creation would give him the adventure and experience he wouldn't have imagined at all. 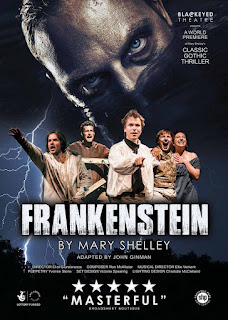 Shelley's literacy works are celebrated with an exploration of science fiction, gothic, spiritualism and figments of one's imagination...themes typical of the Romanticism Era.  The production is staged darkly with dimmed lighting and the wide range of live percussion/music is used for its soundscapes and musical accompaniment.  The creature is excellently portrayed with its puppetry, he comes alive during the story, and his action changes Frankenstein and the other characters' lives forever.

A moving, soul searching, senses stirring, dark production and the company interprets realistically the classic without any compromise.  This is an enjoyable two hour production performed by a five person cast and created imaginatively under the direction of  Eliot Giuralarocca.
Posted by Dawn Smallwood at 09:57 No comments: