I waited in anticipation for Les Miserables to be released in UK cinemas on the 11th January 2013.  I wasn’t happy about other countries such as the USA and Australia having the movie before the UK.  After all quite a lot of the filming had been done in our country and Europe!  I persevered the spoilers the US fans posted on Twitter and friends who personally told me about the movie.

Despite the feelings I have to say it was one of the best movies I’ve ever seen.  I was impressed how Tom Hooper directed the movie.  He is certainly a very talented director I’ll look out for future movies directed by him.  He knows how the musical ticks and both the scenes and musical numbers were of the perfect co-ordination and choreography!

This is strictly an analysis of what my thoughts of the movie are and not a descriptive account.  Many of my friends have seen Les Miserables on stage and already know the story and synopsis.  There is no need to repeat this and I highly recommend seeing either the musical on stage or the movie if anyone hasn’t yet seen it.  It’s a musical where you’ll have to form your judgement and opinions from firsthand experience and not through hearsay!

Here is a summary of my thoughts (Please note these are subjective).  The most outstanding performance that stood out for me was Anne Hathaway (Fantine) and Hugh Jackman (Valjean).  I was especially moved by Anne Hathaway’s Fantine when she sang ‘I Dreamed A Dream’.  I love the overall performance of Hugh Jackman and his talented acting and singing made the role of Jean Valjean perfect.

As for Russell Crowe, his singing didn’t impress me and I felt he was talking through the music than singing!  However I loved his acting and his presence in the movie was perfect for Javert.  I also loved Samantha Barks (Eponine), Eddie Redmayne (Marius) and Aaron Tveit (Enjolras).  I wasn’t moved much by Amanda Seyfried (Cosette) I’m afraid to say.  I’m not keen on the role of Cosette in the musical generally so maybe this could be the reason why I feel the way I do about Amanda’s portrayal.  I don’t know.  I loved it when Samantha Barks sang ‘On My Own’ where I was moved emotively by Eponine’s feelings and desires about her life journey and Marius.

It was nice to see a number of notable West End Performers starring in the movie such as Colm Wilkinson (Bishop of Digne) and Killian Donnelly (Combeferre).

It was great to learn that the movie itself, Hugh Jackman and Anne Hathaway have won Golden Globes Awards on the 13th January 2013.  My conclusion on the movie: Wow! Great movie with great casting!

Regular visitor to the movie?

I made a second trip to the movie the following week (18th January 2013) and took my friend, Debbie, with me.  I was even more moved than the first time!  I managed to spot Fra Fre (Courfeyrac) and Hadley Fraser (Army General of the National Guard) on this occasion. Next time, I will try and look out for more musical theatre performers!  Debbie and I were crying at different stages during the movie.  We were so emotional after ths show that we had pop in the nearby Cafe Rouge for some red wine so we can be calme and composed for making our journey homes haha! What a good start to 2013 so far! Here is more visits to the Les Miserables movie! 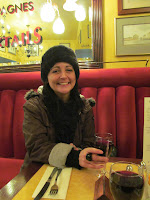 Please feel free to share any thoughts with me about the movie whether you have seen it or if you’re planning to see it.  I’ve tried to make the movie review spoiler free as possible so this is why I’ve not mentioned how the musical is arranged in the movie and not go into any detail of what exactly happens!

Posted by Dawn Smallwood at 04:42 No comments:

I travelled down to London with mixed emotions after having a rubbish New Year.  I was anxious to begin 2013 with something I enjoy doing! I can't think of anything more pleasurable than seeing The Phantom of the Opera, my first show of 2013!  It couldn't be any better! I also booked to see Chariots of Fire which worked out well because I booked it on the day the production closed. The producers moved the closure date forward which meant the 5th January 2013 was the last day of the production.  I considered myself lucky or I would have left it too late. 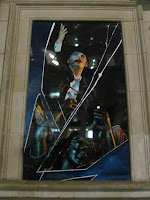 The Phantom of the Opera

After experimenting with my new camera around Trafalgar Square and Her Majesty's Theatre I made my 54th visit to Phantom on the first evening.  I was happy and very relieved to see Marcus Lovett performing this evening as the Phantom after having been intrigued with his portrayal and him as a person for so long.  We had Sofia Escobar as Christine and Simon Thomas as Raoul.  Lara Martin was ill so we had Nicola Rutherford as the understudy for Carlotta and who I enjoyed.  I was especially looking forward to seeing Marcus!

I was amazed with Marcus as the Phantom! The emotive and human interpretation he puts in the role amazes me! His performance throughout was mind blowing and is now my very favourite Phantom! I thoroughly enjoyed Sofia as Christine and she was the best I've seen her perform and also enjoyed the wonderful current cast.

As usual I went to Stage Door and managed to briefly chat with Si Shorten (Swing and Understudy Phantom), Gareth Snook (Monsieur Andre) and Simon Thomas (Raoul).  I've got my programme signed by Sofia and I had another photo taken with her.  The moment eventually came when Marcus came out...he is the nicest person I ever met at Stage Door and it was such a delight to meet him in person!  He signed all my things and we had photos taken.  We were able to have a nice chat about the show and he was interested in my journey as a Phantom Phan.  In all it was a lovely stage door experience and one of the best! He even tweeted that it was a pleasure to meet me and congratulated me on my BA degree.  I was so moved by his Phantom and also him as an individual.  It has taken me 19 years, 54 performances and 16 phantoms to finally have a Favourite Phantom!  I couldn't go straight back to the hotel so I stopped at a late night cafe and celebrated my happiness and giddyness with tea and cheesecake!

The Chariots of Fire

The following day, after a lie in, I was too excited to sleep from a phantastic time I had the night before.  I was especially looking forward spending the day catching up with like minded friends and seeing the matinee performance of Chariots of Fire.  After having breakfast and checking out I headed into the West End.

I met up with Lisa at Leicester Square where were able to have a catch up and also James who joined us for lunch.  Afterwards we made our separate ways to our respective shows. Lisa was seeing Les Miserables and James was seeing Privates on Parade.

I walked with Lisa because our theatres were next door to each other and I met up with Jeanette at the Gielgud Theatre.  We had a coffee at the Dress Circle Bar before the show.  The theatre is beautiful and intimate and I love its ambiance.  The Dress Circle Bar has a balustrade where you can look down the theatre's foyer. We sat in the dress circle slips where we had a good view of the stage even if restricted from the right side of the stage.  It didn't matter as we saw the main action on the stage throughout.

Well, Chariots of Fire is such a lovely and moving stage production.  Everyone knows the famous Vangelis music - which is such a moving musical score in its own right.  I loved how the movie is interpreted on stage (considering I usually have reservations about movies being interpreted on stage).  I felt very moved and inspired with the storyline about two runners' quests and determinate to succeed at the 1924 Olympics amidst facing barriers and challenges from the society around them. It's a shame it has now closed and I do hope it returns to the stage some day whether in London or on tour in the not too distant future

Afterwards we met the principal actors, Jack Lowden (Eric Liddell) and James McArdle (Harold Abraham) at Stage Door.  We also met up with Sophia and again Lisa.  Jeanette, Lisa and I had a drink near Her Majesty's theatre, where Jeanette was seeing Phantom that evening.  I caught up with Sophia afterwards for a bit.  The time came when we had to part company.  After collecting my luggage from my hotel I got my train back to Leeds.  What an amazing whirlwind couple of days it was! Another great London adventure with a lot of highlights!


I plan to be back in London next month for some great, phantastic and wicked times! I'm excited to meet up with more friends and share some potential highlights of 2013!
Posted by Dawn Smallwood at 16:04 2 comments: