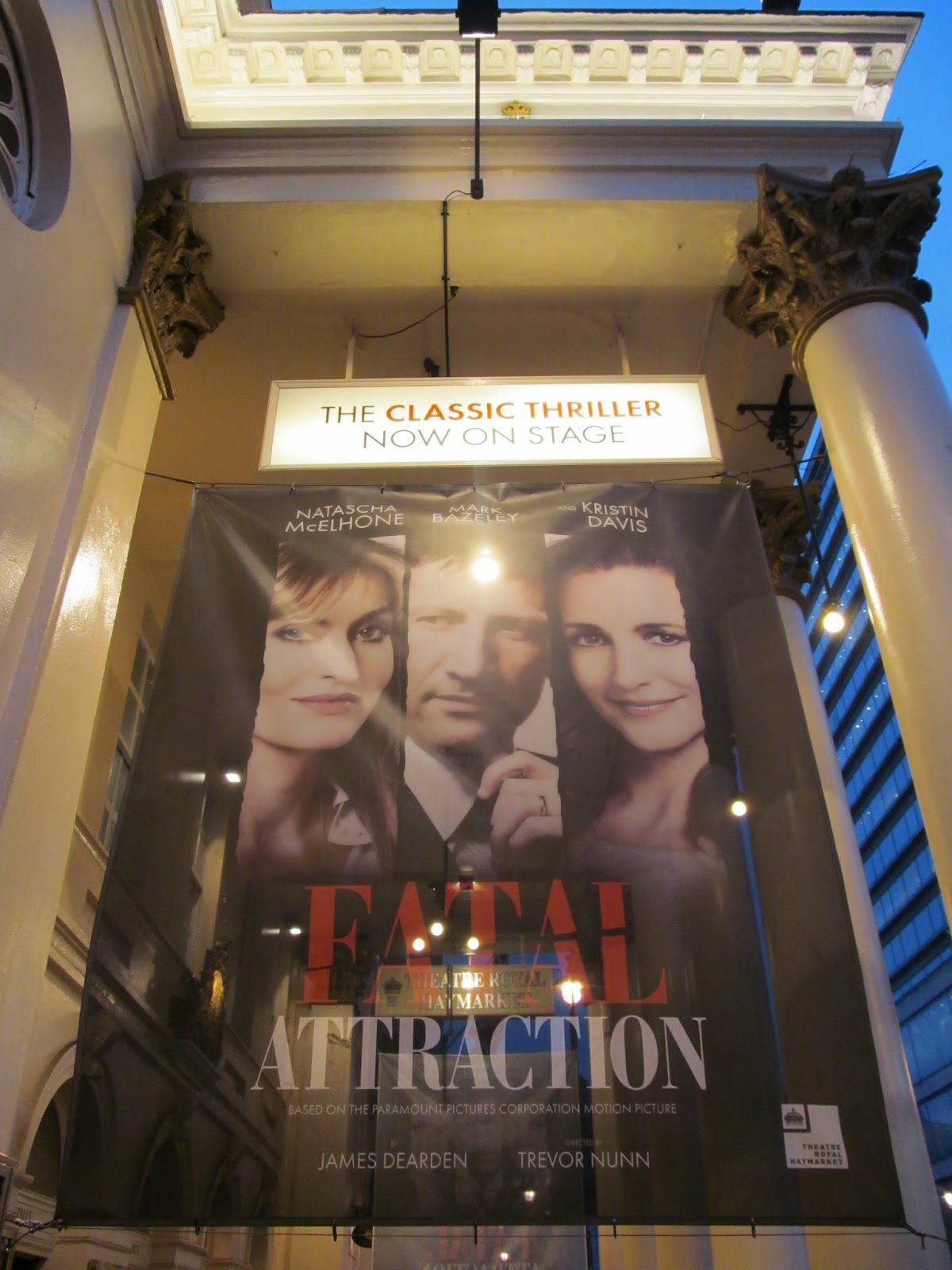 The new play, Fatal Attraction, opened at the Theatre Royal Haymarket, in March 2014 is based on the 1987 psychological thriller movie starring Michael Douglas, Glenn Close and Anne Archer.  James Dearden wrote the screenplay (based from the British short movie, Diversion) and directed by Adrian Lyne.  The play is directed by Trevor Nunn and produced by Robert Fox, Patrick Ryecroft and Theatre Royal Haymarket productions.

As we all know the movie is about a weekend affair between Dan Gallagher and Alex Forrest who refuses to let it go.  Her refusal leads to obsession, stalking and emotional blackmail which has frightening consequences for Dan and his young family.

I was curious about the play and wonderful how the screenplay would adapt on stage.  I've heard mixed reviews however they didn't deter me and I was determined to see the adaptation with an open mind.  I love the movie but I'm more interested in the story's themes which I believed the play will highlight.  Albeit some changes especially at the end, the play kept faithfully to the movie.  I enjoyed seeing Mark Blazeley as Dan Gallagher and the 'unofficial narrator'; Natascha McElhone as Alex Forrest, a successful career woman but a troubled soul; and Kirstin Davis as Beth Gallagher, Dan's wife.  Rest of the cast were excellent. Great and effective play's staging of with a big thanks to Robert Jones (Set and Costume designer); Paul Pyant (Lighting Designer) and Paul Groothus and Ed Clarke (Sound Designers).

The changes which were incorporated were of the original script James Dearden wrote.  It was the displeasure of the movie's test audiences that prompted the producers to change its ending just before its release.  The movie's ending as we know pictures Alex as the 'villian' and Dan as the 'hero' despite the 'blip' and accepting that he had to take responsible for his actions.

It was refreshing to see the ending more neutral where the characters are neither in the right nor in the wrong and there wasn't that blame culture entirely towards a character.  Everyone took some responsibility for their actions and the reasons weren't clear cut because of mitigating circumstances.  James Dearden discussed in the theatre programme that he used the play as an opportunity to reiterate the characters, especially Alex, as he originally wanted them.  She is someone experiencing psychosis but also a troubled lonely soul who is dealing life in New York as a single woman and having a demanding career.

There is certainly a contrast of social attitudes between the movie and the play today.  Compared to 1987 there is an increased awareness of mental health including psychosis; loneliness is commonplace today; more and more people go about their lives single handedly; less dependence on people and society; and an increase in e-communications including social media.  It's felt the changes that were made for the play were appropriate to the audiences today.


Sources: Theatre Programme, Wikipedia (for the movie information)
Posted by Dawn Smallwood at 14:51