I now have the pleasure interviewing Silje Mari, a fellow musical fan and a lover of classic Hollywood Musicals. 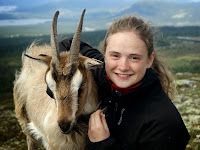 It all started when I watched the 2004 Phantom of the Opera movie for the first time, three or four years ago. At first, it was just the movie itself and the story that interested me, but then I watched the 25th Anniversary Celebration a bit later, and became interested in seeing more of some of the cast.

I then started listening to whatever of their songs I could find around the internet, and got gradually interested in where the songs came from as well, and listened to various versions. Then I got a chance to go to London and see The Phantom of the Opera and Les Misèrables for real, and I was hooked!

I am so glad that I got this interest for theatre, because it has opened up a whole new world to me. Now I always have new songs to listen to and learn, new shows and movies to watch, new idols and favourites, and I've had such a great time all the way!

It's really hard to mention just a few.  I've had so many good times and great experiences thanks to musical theatre! I often think of my whole theatre journey as one big highlight, lol!
But one night really stands out - that's when I celebrated New Years Eve in London last year (2012). I met up with a bunch of people I'd spoken to on Twitter, and we had a great time seeing The Phantom of the Opera and then enjoying the fireworks at Trafalgar Square afterwards. That was the start of a great year in many ways, and a much appreciated friendship with fellow theatre fans.
Being invited to Ramin Karimloo's exclusive Thank you gig in March 2012 must also be considered a highlight, which was also my very first trip to London. I loved the place at once, and couldn't wait to get back.

Other highlights are of course getting to see and meet my idols. I especially remember the days when I finally got to meet Earl Carpenter, Ramin Karimloo, Anna O'Byrne, Alfie Boe, Sierra Boggess, Killian Donnelly and Rufus Sewell. 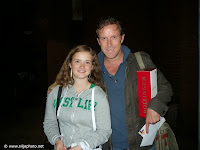 I highly recommend Dirty Dancing, Cats (2013/14 Tour), Billy Elliot, The 39 Steps, War Horse, Once (And Phantom & Les Mis of course). They are some of my favourites so far, and I wouldn't mind watching them again. And if the Singin' in the Rain (2013/14 tour) is as good as the West End production (Palace Theatre, London), I bet it's worth seeing as well!

Loads!!! I always have a long, ever-changing list of shows to see! But on top of that list at the moment are Matilda, Evita, From Here to Eternity, The Commitments, Love Never Dies and Miss Saigon. I'd love to see as many as possible of the well-known musicals, as well as the less popular ones, but at the moment I haven't paid much attention to what's on since I'm back home in Norway now.  I can't just jump on the train to London on a day off any more!

One thing I'm really glad I got the chance to do was travelling around the UK to catch The 2012/13 Phantom of the Opera UK Tour in several places. That way I got to see more of the country and visit several different and wonderful theatres.
There are also some of the shows I've seen that stand out. Like Loserville, with a lovely and brilliant design and a fab cast. And Shrek The Musical, which I wasn't very keen to see to be honest, but I ended up loving each second of it! It was so colourful, with a really interesting set design and great costumes. The cast were wonderful, and it captured the essence of the movies (which I adore) really well.
War Horse was another highlight, with amazing puppetry and the beautiful story, and both Top Hat and Singin' in the Rain were fantastic as I'm a huge fan of the classic Hollywood musicals as well.
I also got the chance to see Maury Yeston's Phantom in a tiny Off West End theatre, which was a great experience. The tiny stage and auditorium made me feel like I was right in the middle of the story, and I loved the whole cast. I was on front row, and the Phantom's cape actually brushed over my feet when he walked past. That's how tiny the whole place was!
Another day that really stand out to me was on  31st August 2013, Marcus Lovett's very last day as the Phantom. I'd seen him on stage and met him a lot the past year, so it was very sad to see him go. He and the rest of the cast gave two stunning performances that day, and I'm so glad that I got to be there and be a part of it all. I bet almost all his fans turned up to say goodbye and I've never seen a crowd that big outside the stage door before!


The Phantom of the Opera has become very special to me. I've seen the show a lot this year and I've got to know the wonderful cast and crew. They always stopped for a chat and I feel really welcome whenever I was there.

I'm going to London for 2013's New Years Eve and booked to see Phantom that evening and Richard II for another day.  I also hope to get day tickets for American Psycho since it has been sold out for a while.  I might see one or two other shows as well, but we'll decide when we get there. I have a feeling that one of them might be Les Misèrables, and maybe Meet Me in St Louis if it's still on and if there are some tickets left.

I would like to say a big thanks to Silje for taking part in this interview and please keep tuned for more interviews!
Posted by Dawn Smallwood at 12:54