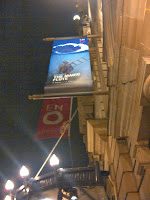 The Magic Flute at the London Coliseum

It was good returning to the London Coliseum after an absence of almost two years! I last was there in December 2011 where I saw English National Opera's Tosca.  I was determined to catch an opera at the Coliseum in 2013.  The new production of Mozart's The Magic Flute fulfilled this mission one November evening!

Mozart composed the music for this opera, more known as a Singspiel, which premiered in 1791 at Vienna.  It is considered as a fairy tale opera which slightly differs from Mozart's other operas.  It was Mozart's last opera.  The original libretto (lyrics) were written by Emanuel Schikander and links to the Singspeil, Oberon.

The Magic Flute was influenced by The Enlightenment, happening at the same time, where reason, wisdom and nature were the way forward for philosophical thinking.  Prince Taminio (Ben Johnson) and Pagageno (Roland Wood) went on a journey of self discovery to rescue Princess Pamina (Devon Guthrie).  Both characters went through a series of trails whilst on their journey to attain The Enlightenment ideals especially those of wisdom and virtues.

Reason was reflected as to why Tamino and Papageno had to go through these trails and to expect the unexpected.  They had the aid of the Three Ladies (Eleanor Davies, Clare Presland and Rosie Aldridge) and Tamino's magic flute to guide them.  It was interesting to see the goddesses of Isis and Osiris being represented - they represent a lot of things but significantly nature, an Enlightenment principle.  They met a number of interesting characters along the way such as The Queen of the Night (Cornelia Gotz), Sarastro (James Creswell) and Monostatos (Brian Galliford).

The opera ended all well....It's a light hearted opera but raised some deep messages which are important to one's soul and all as already discussed.  The Magic Flute was a refreshing change from the tragic operas I usually see.  I thoroughly enjoyed English National Opera's production of The Magic Flute which was co-produced by De Nederlandse Opera and the International Festival of Lyric Art, Aix-en-Provence and under the artistic direction of Simon McBurney.

I was very impressed with Michael Levine's staging, simple but used to a maximum effect and accompanied by creative visual aids.  The visuals for the scenes successfully told the Singspeil effectively.  The opera's music was incredible with the emphasis on the use of wind instruments in the orchestra and the use of the celesta equivalent, to represent the magic bells, captured the opera's spirit.  The wonderful music was conducted superbly by Gergely Madaras.  Certainly a great evening out!

You can find out further information about English National Opera here.