I now have the pleasure to interview Rachel Borland, a fellow musical theatre fan and a lover of Spamalot, The Jersey Boys and Cage Aux Folles. 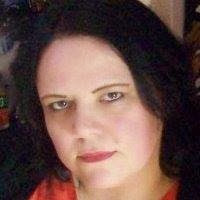 I have always loved literature, even as a small child. My parents read books to me in an animated fashion, which lit up my imagination. As with most children, my first experience of theater would be a pantomime. As with my parents, I was in awe that people were acting out my favourite stories and bringing them to life. I was hooked!

As i began to read for myself, so began my unquenchable thirst for knowledge, fact or fiction. The fact that I could see these stories performed on television, film and stage was perfect. If I did not have my head in a book, I would be watching a performance.

Growing up with school plays and repeats of Christmas TV formed my love of musicals. I associate them with good times. To this day, I can't watch Oliver, or The Wizard of Oz without a big grin. I hope the youth of today, get this thrill with modern musicals.

What have been the highlights of your musical theatre/theatre journey?

As a stage show as a whole - Spamalot. I'm a huge Python fan, and their attention to detail was impressive. The dialogue is still hilarious, and the music worked well. I saw it with the lovely Peter Davison and loved every second. As a musical, there is nothing currently that can touch The Jersey Boys for me. Ryan Molloy is perfectly cast as Frankie, the music makes we get up and dance, and the story is both interesting and touching. Single performance was John Barrowman in La Cage Aux Folles. Fantastic stage presence, high camp fun, and an amazing rendition of I am what I am. 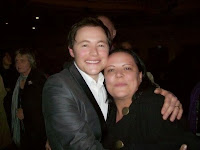 Rachel with Burn Gorman (Cage Aux Folles)
Photo Credit: Rachel Borland
What shows do you recommend that are currently playing in the West End or Regionally?

The Jersey Boys, as discussed; and The Commitments. The show itself, is not that great. The book is poor, and the acting - over-acting! But to see Killian Donnelly sing, was the finest musical performance I have witnessed. The man expresses every note, with every part of his body. He lives the music. Great soundtrack, lots of fun!

For non Musical Theatre, Midsummer Nights Dream at the Noel Coward Theatre with David Walliams and Sheridan Smith.  A fantastic interpretation, soulful and sexy, fun and funny. David Walliams does what he does best as the comic turn Bottom and Sheridan and her sexy sprites, give it a kind of dark magical undertone - there is no doubt we are definitely playing with fire!

Stephen Ward, American Psycho and Book Of Mormon. A mixture of all my favourite elements. History, great literature, and a quirky sense of humour!

Without question, Royal Shakespeare Company Richard II at the Barbican. Lucky enough to see on opening night. What a performance from an amazing cast full of contrasts and contradictions.

For fun, a great night was had with Saucy Jack and the Space Vixens at the Leicester Square Theatre, if ever there was a show that deserved a bigger stage to express itself. This could be the next Rocky Horror! 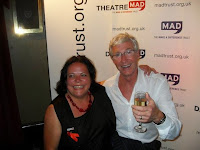 What show are you planning to see next?
Stephen Ward, The Book Of Mormon and of course Richard II at the Barbican!

May I take this opportunity to thank Rachel for taking part.  She can be followed @RachelBorland on Twitter. Please keep tuned for more interviews!
Posted by Dawn Smallwood at 12:28