I now have the pleasure to interview Alison Newnham, a fellow theatre fan and has seen a wide variety of musicals on her theatre journey! 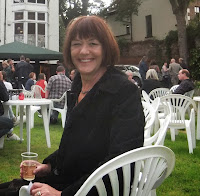 A few things....Being taken to amateur productions and films when I was a child by my mum and Grandma, listening to soundtracks at home, mainly Rogers and Hammerstein. Seeing Oliver when it was a brand new production for my 11th birthday in London (around 1960!).

Being deeply moved by the film of South Pacific when I was about 8 and sobbing for months afterwards whenever I remembered Lt Cable dying!!

The visit to London to see Oliver... etched on my memory forever!!

Introducing my kids to musicals and watching their faces at shows like Starlight Express and now waiting for baby grandson to be old enough to indoctrinate!!!!!

First time I saw Les Miserables and ‘discovering’ how fab Ramin Karimloo is from seeing The Phantom of the Opera and not knowing anything about him until he sang!!!

Two visits to the Oliviers! First was a win with Mastercard in 2012 and this year we got tickets as I rewrote 'Always Look on the Bright Side of Life' as a song about London Theatre and my daughter sang it and it won a prize from the Oliviers.  This year (2013) we sat next to the cast of Top Hat so it was thrilling when they won awards!! And the after show party was heaven walking around and spotting so many Musical Theatre people and taking some sneaky photos!! Discovering how amazing Off West End shows can be.  For example, Mack and Mabel and Titanic at Southwark Playhouse. 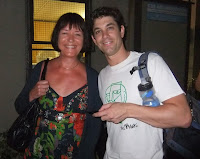 Too many but always Les Miserables. Would have said Top Hat if it was still on but hopefully there will be a tour.  I loved Priscilla at Bristol Hippodrome and Cats (UK Tour) was magical.

Commitments, Jersey Boys, Coriolanus, Candide, Curious Incident of the Dog in the Night Time and One Man Two Guvnors.  I would love to see some of the late-night cabarets that are always popping up but too late for midnight coach back home to Bristol! And when they arrive, Miss Saigon and Me & My Girl (especially if Damian Lewis is in it!!!)

Attending the Olivier Awards,  Cabaret (starring Will Young), Priscilla, Cats which were at Bristol Hippodrome and because I wasn’t expecting them to be so good! A Chorus Line (and meeting the lovely cast a couple of times). Sheytoons in concert, Titanic (just beautiful!) The Pyjama Game at Chichester. 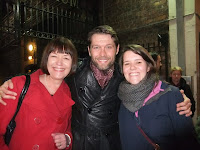 
What show are you planning to see next?

Seven Brides for Seven Brothers (Bristol), West Side Story (Bristol). If I get some theatre vouchers at Christmas, who knows!!! But Commitments and Miss Saigon will probably top of the list!

I’m sometimes asked ‘What’s Your Favourite musical?’ and always say that’s like being asked 'Which is your favourite child!' It’s often the one I’m watching at the time! Unless I'm disappointed with the musical of course, but I’m quite easily pleased!

I would like to say thank you to Alison for taking part.  She can be followed   Please keep tuned for more interviews!