To mark my 100th blog post, I now have the pleasure interviewing Emma McKeating, a big Phantom of the Opera Fan and Mozart Lover. 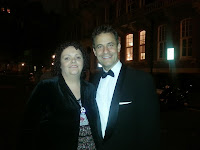 Until I went to high school I was into music from the 1950s and classical, especially Mozart. It wasn't until I went to London on a musical theatre trip that it all changed. We went to the Theatre Museum in Covent Garden. There was a whole display of phantom costumes and the overture played. I was terribly bullied for my appearance in high school and I buried myself in Phantom as I felt how he felt.

I met Andrew Lloyd Webber and Joseph Millson who played Raoul in Love Never Dies at an official fan event arranged by the Really Useful Group in 2011.  Also being at The Phantom of the Opera's 25th Anniversary Celebration event at the Royal Albert Hall in October 2011 and appearing on the DVD as I was sat on the front row in the stalls.  Also meeting so many of my Twitter friends as we are on similar journeys. 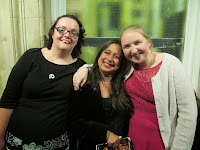 I would recommend The Phantom of the Opera to anyone and everyone. All the elements of the show combine to make an amazing show which transports you to a whole different level.  Also The Lion King is a beautiful show, very powerful and clever costuming.

One show that I haven't seen yet, or on stage at least, is Les Miserables.  Every time I go to London I end up seeing Phantom! I love the music of Les Miserables and the struggle Javert has with himself. So I will have to make an effort to go and see it!

I have so many theatrical highlights this year. I saw The Phantom of the Opera three times this year including Earl Carpenter in the tour at Birmingham. Also seeing Three Phantoms twice this year was amazing plus Cats and Evita.  Andrew Lloyd Webber is a genius.

The first show I am seeing in 2014 is surprise surprise, Phantom! and I'd also love to see Stephen Ward as the story intrigues me. 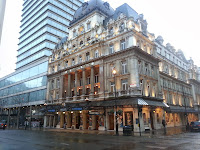