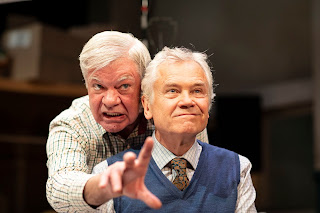 Under the direction of Philip Franks, it is known as a play within a play and the cleverly arranged "fixed" staging which welcomes one to the audience, courtesy of Adrian Linford, gives this impression.  The play rehearsed, Caliban's Day, is about a fictional meeting between two intriguing but legendary artists; the poet, W.H. Auden (Fitz (Kelly) and the composer, Benjamin Britten (Henry (Yelland) which takes place in the early 1970s and before their deaths.

Amid all this they are backed by supporting actors Stuart (Tim (Benjamin Chandler) and Humphrey Carter (Donald (John Wark) and also the creative crew of Kay, company stage manager, (Veronica Roberts) and George, assistant stage manager, (Alexandra Guelff) and the playwright, Neil (Robert Mountford).  In the director's absence the cast rehearse with a re-run of Caliban's Day and all share chaotically and farcically how the play should, in their minds, run.

The main characters, Auden and Britten, are explored with their contrasting personalities.  Auden, outspoken and crude with his suggestive innuendos and Britten, who somewhat has a more reserved diplomatic demeanour, is mysterious and intriguing with what he shares.  The ambiguity and tongue in cheek is Bennett's playwright hallmark however his writing style allows for key themes to be explored including sexuality, loneliness, dealing with demands of their art including friendship and rivalry, and subsequently death. Such themes were then somewhat more complex taking in account the societal attitudes at the peak of their lives especially sexuality and how they had to live with risks of social isolation and marginalisation.

The Habit of Art has no specific plot but instead an insight into two unique artists of the 20th Century and an opportunity for the audience to interpret and appreciate what is being presented on stage.  The conclusion is left open to interpretation and for anyone to add towards its notion.  The production is entertaining as well as reflective and put well together by an excellent cast led by Kelly and talented creative and production teams.

Originally Reviewed for The Reviews Hub and the link can be found here.


Posted by Dawn Smallwood at 12:33 No comments:

Titanic The Musical, Sheffield (Originally reviewed for The Reviews Hub, May 2018)

Originally reviewed for The Reviews Hub and the link can be found here.

Posted by Dawn Smallwood at 12:27 No comments:

Originally reviewed for Fairy Powered Productions and the link can be found here. 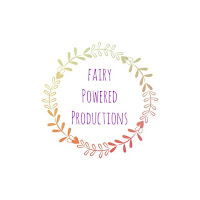 The Last Ship Review
Leeds Grand Theatre – Until Saturday 5th May 2018
Reviewed By Dawn Smallwood
5*****
Sting, under the direction of Lorne Campbell, brings this critically acclaimed musical, The Last Ship, to Leeds which is currently part of the UK and Ireland tour. The musical is based on the singer’s music and lyrics and looks back to the ship building community in the Tyne and Wear during its industry decline in the 1970s.
The story is about Gideon Fletcher (Richard Fleeshman), a sailor, who returns home after spending 17 years in the Navy and is confronted with the past and present tensions concerning his family, particularly his ex girlfriend, Meg (Frances McNamee) and the town’s community. The demise of the shipbuilding industry is evident with their local ship yard closing and the town is determined to fight saving the ship and the yard. This is lead by Jackie (Joe McGann), the yard’s foreman, and his wife Peggy (Charlie Hardwick). The story is in similar vein to Sting who grew up in a similar community, left the town to pursue a music career, and returned to tell this tale.
Sting sought inspiration from his album, The Soul Cages, to generate the moving and powerful musical score and lyrics to the musical. The musical numbers includes the memorable Island of Souls, All This Time, When We Dance and The Last Ship and tells this political and personal stirred story – this is quintessential to many communities who earnestly fought to save the towns’ industries and the livelihoods it generated. One can think of the coal mining towns and villages’ role during the 1984/85 Miners Strike. Each song sung depicts the emotions, passions and the souls of the community and how much the shipyard and the livelihood mean to them. The songs are sung with such conviction from individuals and united in chorus from the ensemble.
59 Production’s staging is stunning with its hi-tech backdrop and life size ship yard from where the story is told. The space is utilised very well with successful transitions being made between each scene. The lighting and sounds, courtesy of Matt Daw and Sebastian Frost, compliment the staging particularly with the notion that one is by the sea and the waves crashing in the background.
The Last Ship is delivered excellently from the cast who perform wholeheartedly and in unison, particularly the songs’ choruses, from beginning to the end. Every single performer has a part to play and impressions are certainly left. A lot of thought, heart and soul have been put into the story along with Sting’s musical and lyrical ingenuity. It is a realistic poignant beautiful musical to see and is highly commended and recommendable during its tour.
Posted by Dawn Smallwood at 12:18 No comments:

I would like to share some Nautical highlight from two amazing musicals with a ship theme I've seen on stage this year.  I had pleasure seeing and reviewing the following: 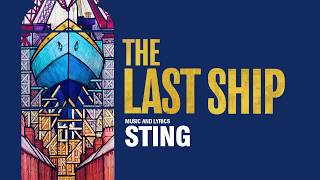 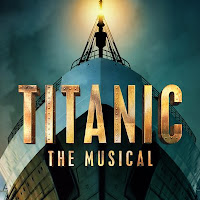 Plus here's my review of Titanic The Musical (click on the link) when I saw it Southwark Playhouse in 2013.
Posted by Dawn Smallwood at 12:08 No comments:

All About Me Blog Update

This is to let you know that I'll be no longer reviewing shows for this blog.

I now review regularly for Fairypowered Productions and also The Review Hubs.  I used to review for the North West End but hope to review for them again in the not too distant future.  I'll post some reviews which I've done on behalf of the three reviewing sites on this blog from time to time.

I will still see many shows but if I'm not reviewing I won't be blogging!  Instead I'll share on social media my immediate thoughts of the shows I do get to see!

Thank you for your support always.


*post note*
I occasionally review independently and will post what I review on here.  However shows I review for other reviewing websites will be on their sites (occasionally I'll publish some here from time to time) but certainly won't be reviewing if I've paid to see the show!
Posted by Dawn Smallwood at 16:20 No comments:

This was originally reviewed for The Reviews Hub in March 2017 and the link can be found here.

Mind The Gap Studios are known for their true stories from the heart, and this is certainly evident in this unique production of Contained.   The production features nine performers with learning disabilities and the show is in joint collaboration from Alan Lyddiard (Anniversary) and award-winning French Photographer and filmmaker, Denis Darzacq.
The performance begins when each actor, one by one, walks out to introduce themselves and share their compelling stories, invoking a range of emotions from the listeners.  The barriers and stereotyped perceptions the performers have had to face are unbelievable.  It is sad that even today, people can be judged primarily on their disability, casting a shadow on what they, as an individual, are capable of. Jez Colborne, the show’s composer, inspired by Bob Marley’s Get Up Stand Up, is determined to stand for his rights, no matter what his personal circumstances are. He asserts that one is neither my judge nor my jury and one should focus on ability.
Many will know Liam Bairstow for his role as Alex Warner in Coronation Street. During the production he shares his somewhat harrowing experiences, and how he eventually overcame them, securing a role on Britain’s longest running soap opera.  There is also Howard, who drums to “forget all things” and his girlfriend, Zara, who experienced discrimination at a mainstream school, labelled as stupid, among other titles.  The performers assure one another that they are all there for each other, the bond between them palpable.

Another actor, Paul, turns to the performance arts to combat stress and anger from his experiences but is grateful for his current foster family, who love him for who he is.   The remaining performers share their stories, including Alison, from Bradford. She has lived through some poignant experiences and is also a talented saxophone player.

On stage, the performers are supported by Charli Ward, the company’s academy director, who works holistically and in unison with the actors.  The show is accessible with visual screenings of texts, kinesthetic use of videos when stories are shared one by one, and a sign language interpreter is also present on stage.

At the end of the production, each performer consolidates their story, and there is a heartfelt and optimistic finale of I am fine, sung collectively.  This emphasises their beliefs in freedom and being themselves, not conforming to existing perceptions.  Significantly, it is about not being figuratively contained and is thought-provoking for all to reconsider disability in general.

Contained is a moving, poignant and powerful production that celebrates ability and artistic successes.  The production is colourfully reflective, giving the viewer an opportunity to learn about the world through the perspective of those with learning disabilities.  This is an unmissable production and one which is incredibly well done, and well received by the audience from beginning to end.

Posted by Dawn Smallwood at 16:13 No comments: