I would like to interview Anne Stern, a fellow musical theatre fan and how seeing Any Dream Will Do, Joseph and Lee Mead have changed her life for the good.

I suppose it was my dad the first got me to appreciate music. He loved big band music and listening to musical soundtracks. He never worked on a Monday and used to have the tunes blaring whilst he hoovered and dusted.  I suppose the music was the first thing I knew about. I never went to the live theatre till I was married with my own children.  I took them to see Starlight Express at the Apollo Victoria and we loved it!  So much so that I took them three times more. That was when my true passion started and it was years before I went to a live show again.


What have been the highlights of your musical theatre journey? 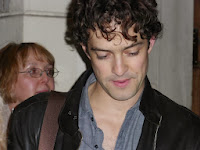 Lee Mead
Photo Credit: Anne Stern
My highlight of my musical theatre experience is difficult to answer. In 2006 my son became seriously ill, which resulted in us having to spend a year in hospital whilst he was battling for his life. Once he was better I became miserable and very very depressed. That was in 2007 and around the same time as Any Dream Will Do started on TV. I was intrigued by the show and I fell in love with Lee Mead.  I saw Joseph for my birthday in October and was hooked. My depression lifted with the help of people that I met in my Joseph journey (and the doctor lol) although it wasn’t and still isn’t my favourite show.  Joseph changed my life for the better. I joined various forums for fans of the show and of Lee Mead and the rest is history!   I met some wonderful like minded people who have become close friends of mine with many of whom I still see on a regular basis going to theatre etc.  I therefore suppose Joseph and Any Dream Will Do is a highlight in my life.

As to a show I would recommend in the West End or Regional playing at the moment that would be The Commitments. I loved it!
Are there any shows that you haven’t seen that you would like to?
I’m lucky enough to have seen a lot of shows and there is nothing in the West End that I haven’t seen that I want to see. However I would love to see Singin The Rain on tour and will get tickets at some point

What have been your theatrical highlights in 2013?
The Colour Purple at The Menier blew me away, but my real highlight was seeing every show (bar 2) of The West End Men in concert, technically not a conventional West End show but it did do a very short run at The Vaudeville. The combination of meeting friends , Lee Mead, Glenn Carter, David Thaxton, Matt Willis and also Stephen Ramen Hughes, also chatting with Kerry Ellis and Carly Stenson at the stage door was a real highlight for me.


What show are you planning to see next?
As to up and coming shows: Night Before Christmas and 12 Angry Men in 2013. Meet Me In St Louis , Urine Town, The Full Monty, Fiddler on the Roof and Miss Saigon in 2014.