I now have the pleasure to interview James Flockhart, a fellow theatre and Wicked fan.


Please tell me how you got into musical theatre/theatre in general?

When I was younger I always had a passion for performing although when it came to performing myself it was very little apart from the odd school production. I think I must have liked the whole attention side of it all and being on stage or watching a performance all seemed very magical. Some of the shows I saw were at Blackpool Pleasure beach at their Ice Rink and they staged professional shows yearly which I saw regularly with my Nan and Grandad.  Seeing these very slick shows with amazing routines and costumes must have started my obsession.

When I was 19 years old, a friend and I went to see Chicago at London's Adelphi Theatre (shortly before it transferred to the Cambridge Theatre) slightly selfish on my part as I wanted to see the show so I paid for tickets for us to see the show. Well I can firmly say it was the greatest show and performance I had ever seen! I don't think you forget your first West End show and probably why I went back three times before I ventured out into other West End shows. Since then I have seen over 500 shows and it has changed my life.

What have been the highlights of your musical theatre journey? This is tough question for many reasons.  Highlights of my musical theatre journey are probably the friends I have made; I have met so many what we tend to call ''stagey'' people and many of whom I regularly go to shows with again and again. My ''stagey'' friends are not just my friends, they are my family and I am extremely grateful they came into my life. Other highlights are to do with shows like Wicked, which has brought many wonderful people into my life and Wicked has also changed my life, it got me to go to Broadway to see Kerry Ellis as Elphaba for one. 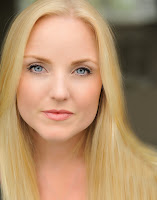 Kerry Ellis is one of my favourite performers,
She made me love Wicked and has and always will have a place in my heart.
(Photo Credit: James Flockhart)

What shows do you recommend that are currently playing in the West End or Regionally? On tour at the moment I would recommend highly either the touring production of Wicked or Seven Brides For Seven Brothers, both are incredibly fantastic, with wonderful casts and choreography. Wicked of course is my favourite show anyway so the tour was bound to impress me.  Seven Brides For Seven Brothers is a new one of me but it is such a fantastic show which is so ahead of its time, filled with incredible Cirque Du Soleil type choreography and a gorgeously talented cast, Seven Brides or SB47B as it has been often referred to has just announced Bromley, Wimbledon and Oxford to its tour so there is hopefully a location for everyone.

In the West End there are too many shows to mention but I will name a few, Mojo which has just opened at the Harold Pinter Theatre is a must stop for the cast alone.  Also Barking In Essex at the Wydhams Theatre is a wonderful comedy filled with laugh out loud moments.  Musical wise I would recommend The Bodyguard, although I have not seen the new cast led by Beverley Knight the show is wonderful and I am sure Beverely Knight is rocking the roof off the Adelphi Theatre. Are there any shows that you haven’t seen that you would like to? Some of the shows on my list to book are Mojo, From Here To Eternity, and Henry IV starring Jude Law.  I will get round to booking them soon, there is so much to see in the West End its hard to choose sometimes, although I do generally end up seeing most shows, which probably shows why I have no money. What have been your theatrical highlights in 2013? As mentioned Seven Brides For Seven Brothers has to be one of the most amazing shows of the year.  Seeing Heather Headley in her final performance in The Bodyguard was one incredible night and I couldn't believe how talented that lady is! I also made my annual trip to New York and a few show which really stood out were Spiderman, Newsies and Bare. All three were so incredible, I always feel, no disrespect to the West End but Broadway is much more toned and sleek. I do adore America and I think that makes it all more enjoyable.

Heather Headley made me love Whitney Houston songs and I am so looking forward to seeing her again
when she opens The Bodyguard on Broadway.
(Photo Credit: James Flockhart)

What show are you planning to see next? I don't have many shows booked for the remainder of the year but I have recently this month seen Wicked five times. I think I have got my addiction back, this Saturday just gone I made my 44th and 45th visit back to Wicked, after going on Monday night to see the brand new cast which was led by Willemijn Verkaik as Elphaba and Savannah Stevenson as Galinda. I had to go back for a double showing, the matinee and evening performances of Wicked. The matinee warms me up and by the evening I am so excited to see the show again. So I am sure Wicked is one of the next shows I'll see. Both Willemijn and Savannah are absolutely incredible both vocally and acting wise and also Jeremy Taylor is the best Fiyero to grace the Apollo Victoria - grab a ticket now!


May I take an opportunity to say a big thank you to James for taking part in this interview.  He can be contacted on Twitter: @jamesflockhart and also his blog.