The aim of these interviews is to share with one another our love for the theatre and the arts. So here we go!

Let us interview, Alison Willman, a fellow theatre fan who is always at home in a theatre!

I’ve loved musicals for as long as I can remember. I grew up watching musicals like Oliver! Tom Thumb and The Wizard of Oz with my Nanna - I knew Consider Yourself from Oliver! off by heart before I could spell my own name! When I was 10 my Mum and my Auntie took me to see The Lion King in the West End, and I was hooked. The next year we saw Chitty Chitty Bang Bang with Gary Wilmot and Wayne Sleep – still one of my favourite shows to date. What I love the most about musical theatre though is the variety – I’ve had days where I’ve seen the matinee of a musical set in the1920s, and the evening performance of an 80s rock musical, complete with a smoke machine and bad hair. I go to the theatre whenever I can, be it up here in Manchester or in the West End, and I’ll watch pretty much anything.

For me the absolute highlight has been the show Rock of Ages, which sadly shut at the beginning of the month (November 2013). I have seen a lot of shows but this was the first one that kept me going back again and again – I hit 30 shows by the end! Not only was the show hilarious and jam-packed full of rock classics, but the cast were the best I have ever seen. You could see on their faces how much they loved the show and they always had time for you at the stage door – a couple even missed their trains because they were too busy chatting! 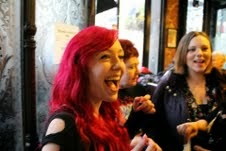 I have just seen Singin’ in the Rain which is currently on tour and if it’s coming to a theatre near you then you have to go and see it. It is absolutely incredible. The costumes are beautiful, the staging is the best I have ever seen and the special effects are just phenomenal!

As for the West End, that’s a tough one. There are so many shows that are all so different! I would definitely recommend We Will Rock You – who doesn’t like Queen?! There’s also Jersey Boys which is a fascinating look at the story of Frankie Valli and the Four Seasons, and then there’s Wicked, which is a kind-of prequel to the Wizard of Oz. Whatever you choose to go and see – don’t listen to the reviews. Even if the show has one star and is doomed to close within a month of opening, go and see it and make your own mind up. That’s the beauty of the theatre – one person’s worst nightmare is another person’s dream come true!

Are there any shows that you haven’t seen that you would like to see?

I really want to see Chicago at some point – it’s like a rite of passage for musical theatre fans! I’d also really like to see From Here to Eternity, The Bodyguard, The Book of Mormon, The Commitments and quite a few more!

I would have to say the We Will Rock You cast change. I was on the front row of the stalls and Brian May rose up from a trapdoor in the centre of the stage, surrounded by smoke and playing Bohemian Rhapsody on the guitar. It doesn’t get any cooler than that!

My next show will be my sixth visit to Wicked, to see Jeremy Taylor take over the role of Fiyero. After that I’ve got RENT in Concert and then Richard ll – quite a mix really!

May I take an opportunity to say a big thank you to Alison for taking part in this interview.  She can be contacted on Twitter: @alisonlouise94 and please do check out her incredible blog
Please keep tuned for my next interviewee....which is coming very soon!