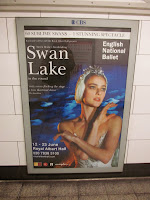 I have to admit I'm not the biggest ballet fan in the world.  I'm more into operas and musical theatre and prefer hearing dialogue spoken and/or sung in the performances.  I remember when I was younger my Mum took me to my very first ballet at the Leeds Grand Theatre (my local theatre) in November 1993.  We went to see English National Ballet's Sleeping Beauty.  I thought it was wonderful and pleasing to the eye.  I also enjoyed listening to the classical musical of Prokofiev.  It's like everything else, you always remember your first time.

To date, since 1993, I've seen 47 live performances including 25 different ballets and dance shows.  Swan Lake is the ballet/dance production I've seen.  I've seen it 11 times altogether by five companies and the last production I saw was Swan Lake in the Round by English National Ballet at the Royal Albert Hall.  I've always wanted to see this particular production and my dream came true in June 2013.

During the past five years, I grow to become fond of dance productions with contemporary and emotive twists.  I always tried to see productions by Northern Ballet and New Adventures.  I love how both companies pay detailed attention to the thorough interpretation of the story and its characters.  I love how the artistic directors link the stories to modern society and the issues one faces today.  Also have the moral duty to raise relevant messages.

Over the years, I've enjoyed seeing Northern Ballet interpret beautifully and emotively the classics they add to their repertoire such as Great Expectations, Jekyll & Hyde, Dracula and Hunchback of Notre Dame.  I saw my first ever Matthew Bourne's New Adventures production of Sleeping Beauty this year at Bradford Alhambra Theatre (My thoughts are via this blog).

Another dance production I must mention is Wild Rose's Russian Ice Stars Phantom of the Opera on Ice! It's great to see an incredible story set to wonderful music composed by Roberto Danova.   The show is performed by talented Russian ice stars and songs sang by incredible artists amongst amazing sets.  This production compliments my love for my favourite musical of all time and my long but amazing Phantom journey!

West Side Story is a production which focuses on dance as much as singing.  I saw the UK Tour production at the end of September at Liverpool Empire Theatre.  It's interesting to see how the dancing tells the story as much as the lyrics of issues that were paramount in the 1950s as much they are today.

With a sabbatical being planned in late 2014 I won't be going to the theatre now compared to 2012 and most of 2013.  However, in December 2013, I'm seeing a world premiere preview of Northern Ballet's new production of Cinderella - very different to what productions I've seen by the company in the past.  Next year, I've booked New Adventures Swan Lake.  There are also a couple of other productions I wouldn't mind seeing but I think it's more unlikely than likely - lots of reminiscing instead!

What the future holds?

Today I'm very selective what dance productions I see but always enjoy an evening of dance!
Posted by Dawn Smallwood at 11:47