A Taste of National Theatre

2013 has been a good year as far as The National Theatre is concerned.  Not just for the 50th Anniversary but having the opportunity and privilege of seeing several of the acclaimed productions both on stage and also screenings at my local cinema. 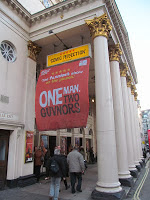 One Man Two Guvnors
This year I saw Richard Bean's play at the Theatre Royal Haymarket.  I saw this production for the first time on its inaugural UK Tour at the Leeds Grand Theatre in December 2012.  The comedy play is still fresh and funny as ever and starring Rufus Hound as Francis Henshall.
The Curious Incident of the Dog in the Night Time
I especially enjoyed this play when I saw it in May 2013.  Since then I've read Mark Haddon's book which gave me a deep insight to Christopher Boone's life and it's a book I highly recommend!  You can read my blog here about my thoughts of the play. 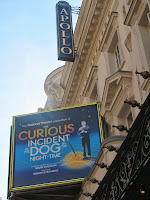 War Horse
At the end of June I saw again the emotive but beautiful Michael Morpurgo's War Horse.  The story of Joey and Arthur will always capture my heart especially with their unbreakable bond.  I was privileged to have attend The Platform Event: Inside the Horse before seeing the matinee performance.  Please read my blog here about my War Horse experience.  I look forward to seeing War Horse again on the live screen at my local cinema at the end of February and also in Bradford during its UK Tour in 2014.

Othello
I've struggled to see Othello live at the National Theatre.  Either it was no availability of tickets for the dates I wanted to go to or I wasn't available to go when tickets were available.  However, thanks to NT Live, Othello was scheduled to be screened (yes, live!) at the end of September.  This more than made up the disappointment for not seeing it live at the Olivier Theatre.  I had to book my ticket in advance as the screening at the cinema was sold out completely.


I was inspired to see Shakespeare's Othello after seeing Opera North's production of Verdi's Othello.  As well as it being an amazing opera based on a tragedy I was fascinated with the story.  The messages raised from the story were interesting such as hierarchy, favouritism, jealously, manipulation and subconsciously race and creed among the characters and only all to be met with tragic consequences. National Theatre's Othello exceeded my expectations and both Adrian Lester and Rory Kinnear amazingly portrayed their roles of Othello and Lago respectively.  The production was such a treat to watch!

People
At the beginning of November I saw National Theatre's People at The Leeds Grand Theatre as part of the UK Tour.  It was my first Alan Bennett's play I saw and I know it won't be my last!  I loved how Bennett tells the story and pushes the boundaries of social conventions and expectations.  This approach made the story of two disagreeing ladies over a historic house unique Both Dorothy (Sian Phillips) and June (Selina Cadell) were keen to pursue their nostalgic journeys over the house's future and having to deal with other people who wanted to traipse the house for selfish reasons. I laughed from beginning to end and danced to Down Town afterwards!