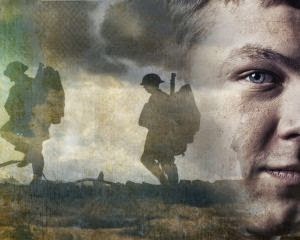 Journey's End is currently on at the Octagon Theatre in Bolton.  Written by R C Sherriff, late survivor of World War, it is a humane account about the war from a soldier's perspective and is directed by David Thacker, Octagon Theatre's Artistic Director.  The play was first premiered in 1928 and a year later was performed by 14 companies and translated into 17 European languages.

Journey's End is performed in the Octagon's 'in the round' theatre space with the atmospheric dug out being the main focal point with the soldiers' entering and existing from and to battle.  James Cotterill designed the set in away where the audience is intimately part of the play with the sound scapes of battle and the reclusive dim lighting reliant on just candles, courtesy of Richard G Jones and Andy G Jones.

The play focuses on the soldiers themselves and the humane account on how they deal with the war.  It is set at a critical time in 1918 at the height of two crucial events, Vimy Ridge and the German's Operation Michael.  Sherriff shared how horrific life was in the trenches such as the psychological trauma one endured and yet they had to put those fears aside when they fought.  There were the physical factors such as exhaustion, starvation, pestilences, diseases whilst living in inhabitable conditions.

The main character is Captain Stanhope who leads his men to battle by example.  However his troubled mind is dependent on his whiskey consumption but he defensively denies the psychological strains caused by the trauma whenever he is challenged.  James Dutton, plays an outstanding role as Captain Stanhope, and is a joy to watch! His excellent and very moving acting portrays perfectly the troubles he feels and yet he switches impressively to lead his men and deal with the tragedies he and his team faced even if one can see his fragility.  Stanhope is a certainly a character which Sherriff said about doing the 'hardest task' in such extraordinary circumstances.

Interestingly, a number of themes are raised from Journey's End including psychological trauma, mental health and alcoholism which all link to one another.  It isn't any different today with psychological and mental health issues common to soldiers who have been in combat and the emphasis is about more support being available for soldiers and families.

A very enjoyable, insightful and moving play where life in the dugout guarantees an overall and maximum impact about what life was really like for the soldiers in the First World War.  An excellent cast performs this play very well and it's playing at the Octagon Theatre Bolton on 4th October 2014.
Posted by Dawn Smallwood at 16:40