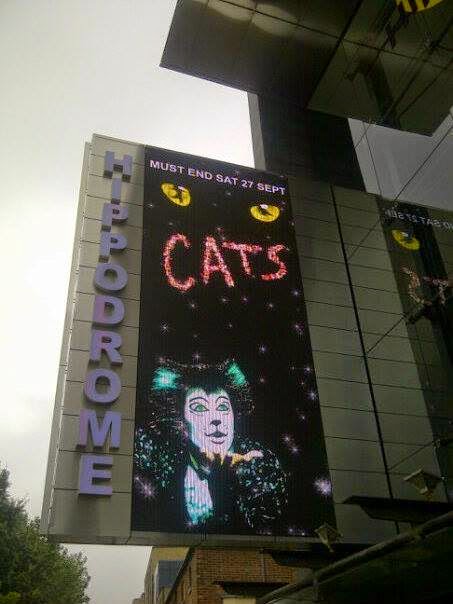 
My fourth and final trip to CATS on the UK Tour of 2013/14 was at Birmingham's Hippodrome, the last UK stop on its two year or so extensive UK and Europe Tour. Please see my reviews of my previous visits to CATS on the tour in Bradford, Liverpool and Llandudno. After being me-wowed so much in Llandudno in June I immediately booked a ticket to see it again in Birmingham.


CATS is running at Birmingham's Hippodrome from 9th September to 27th September 2014. All the cast principals were on except for the understudy for Macavity/Admetus, played by one of the swings, including Sophia Ragavelas, Zizi Strallen, Nicholas Pound, Filippo Strocchi, Joseph Poulton, Abigail Jaye and company.

One of the performance highlights must be Demeter, played by Zizi Strallen.  Zizi gives a thorough interpretation of the character with its solid acting and singing.  Her amazing intricate dancing and her facial and body expressions from scene to scene flows nicely to what is happening and intuitively to any potential dangers involving Macavity.

Rum Tug Tugger, played by Filippo Strocchi, plays a proactive and interactive role throughout the show and is a tease to the feline who are attracted to his charms.  Rum Tug Tugger and Munkustrap, played by Callum Train, jointly narrate and introduce its scenes and their fellow feline companions.

Breathtaking energetic dancing from Mr Mistoffolees, danced by Joseph Poulton, is definitely a performance highlight.  Poulton, a ballet trained dancer, is enjoyable to watching during the magical Mr Mistoffolees and the choreography ensures full participation from everyone on stage and in the audience. Truly magical and electrifying.

Sophia Ragavelas's portrayal of Grizabella never fails to impress! Her rendition of Memory is so emotively charged where the character's sad journey is felt.

An entertaining and emotive afternoon at Birmingham's Hippodrome.  CATS will be arriving in London's West End end of this year and it isn't long now! In the meantime, personally, this is probably the best performance I've ever seen at CATS!

CATS is playing at Birmingham's Hippodrome until Saturday 27th September 2014.