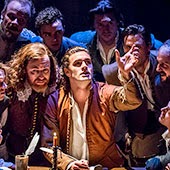 
Shakespeare in Love, The Play, opened in July 2014 at London's Noel Coward Theatre and is favourably treading the stage's boards.  The comedy's opening coincides nicely after Shakespeare's 450th Birthday Celebrations.  Based on Marc Norman and Tom Stoppard's screenplay, which starred Gwyneth Paltrow and Joseph Fiennes, it is adapted on stage by Lee Hall who is well known for this staging in Billy Eliott.

The comedy is about Will (played by Tom Bateman), an ambitious playwright, who is experiencing a writer's block and its difficulties, which playwrights then and today can relate to.  Viola de Lesseps (played by Lucy Briggs-Owen) is passionate about acting but women were forbidden to perform on stage at the time.  Disguising herself as a man, unknown to Will at the time, she successfully acquires the role of Romeo following an audition.  Shakespeare in Love similarly plays Romeo and Juliet in a Romeo and Juliet setting.  Lady Viola comes from a privileged background and is bound for marriage to a man, Wessex (played by Alistair Petrie), who she does not love.  Both Viola and Will prohibitively fall in love and both inspire one another when she becomes Will's muse for his new play, Romeo and Juliet. 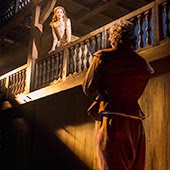 
Set at the end of the 16th Century, in Renaissance London, Will, parallel to William Shakespeare, is surrounded by key literary playwrights and actors including Marlowe (played by David Oaks), Webster (played by Colin Ryan) and Ned Alleyn (played by Doug Rao).  They are subjected to Tilney's (played by Ian Bartholomew) strict censorship which was known to have a devastating effect on many of the new plays that were written at the time.

This production is told three way on stage with its stunning Elizabethean sets and costumes, courtesy of Nicky Ormerod, Neil Austin and Simon Baker.  The 'Food of Love' of music, dancing and storytelling are the ingredients that make the play tick, under the care of Paddy Cunneen, Jane Gibson and Tim Van Eyken, with its reflective and comedic aspects and is quintessential of the Renaissance Era. 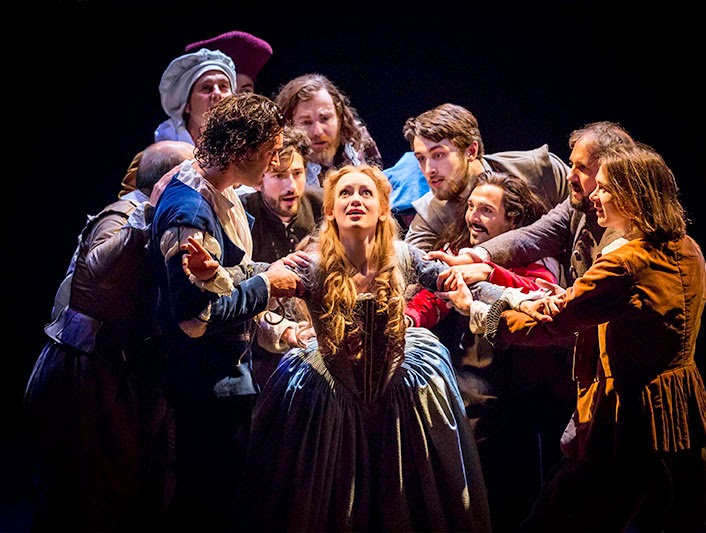 
Shakespeare in Love has the honour being played by an excellent and talented cast led by Bartholomew, Bateman, Briggs-Owen, Petrie, Anne Carteret (who plays Queen Elizabeth) and not forgetting the star of the show, Spot (played by Barney), who is awesome on stage and does indeed have a bit!  It's fun for Shakespeare to be in love and for one and all to feel these vibes and be educated by such a legend!

Shakespeare in Love is playing at the Noel Coward Theatre and is booking until next year!