A Fiddle Made in The Great War 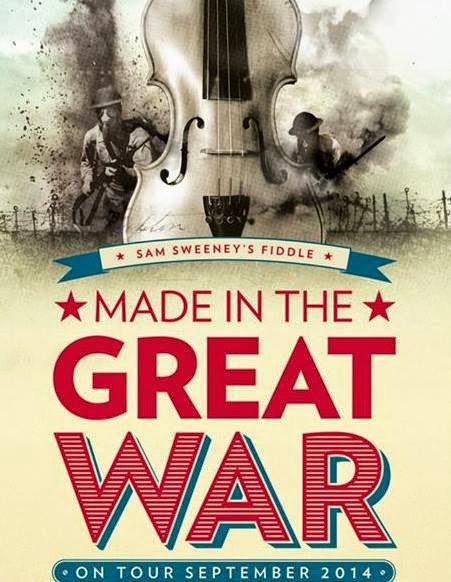 
Sam Sweeney, an established folk musician and a member of the folk group, Bellowhead, shares the story of his fiddle.  He bought the fiddle from Roger Claridge who learnt about the incredible discovery where the musical instrument originated from.  The fiddle goes back nearly a 100 years ago and at the time of the First World War.  It's only fitting for Sweeney to commemorate the discovery and its context of the Great War.

Sweeney, Hugh Lupton, Rob Harbron and Paul Sartin opens the first half of the show with some popular folklore music and songs.  Some familiar tunes and some not so are on the bill.  Lupton fittingly links the text to the music which gives a poetic essence as well as raising the evening show's themes.

The second half is certainly the show's highlight.  Audience members are given a multi media inside of Richard Howard's life.  Howard was a Leeds musician and regularly played in the city's music halls prior and during the war.  Some of the music and songs, popular city hall's music numbers, were played and sung.  Poignancy is created on stage when Lupton revealed the news about Howard being conscripted to military service and everything else had to be put on hold including his musical career and significantly his violin making.

The music hall scene then reflects the patriotism and the Government's propaganda for civilians to enlist.  The tone of attitude changed when many learnt of the first hand experiences about those who fight and fought in the trenches as expressed in the music, songs and sketches.  Sweeney, Lupton, Harbron and Sartin focuses on the circumstantial themes of the Great War and reworked the music with traditional folklore. Crucially military music is featured especially the March of Duke of Wellington (West Riding) Regiment where Howard had served.

A well structured combination of music, story telling, and film.  This gives a moving story of Sweeney's fiddle and its contextual history.  The use of video footage enhances and commemorates Howard, the fiddle, and the events of the First World War.  A touching moment is when Sweeney plays a beautifully piece of music which is a perfect tribute to the fallen war hero and his original violin maker, Richard Howard.

Further information about the show can be found here.