From Utopia to Dystopia!

Matthew Bourne's and Re:Bourne is currently touring the UK with their acclaimed production, Lord of the Flies.  From Liverpool it will next go to Canterbury, London, Cardiff, Newcastle, Norwich and finishing at Bradford in December. This production powerfully and hauntingly retells William Golding's classic.  The joint production was originally premiered in Glasgow back in 2011. 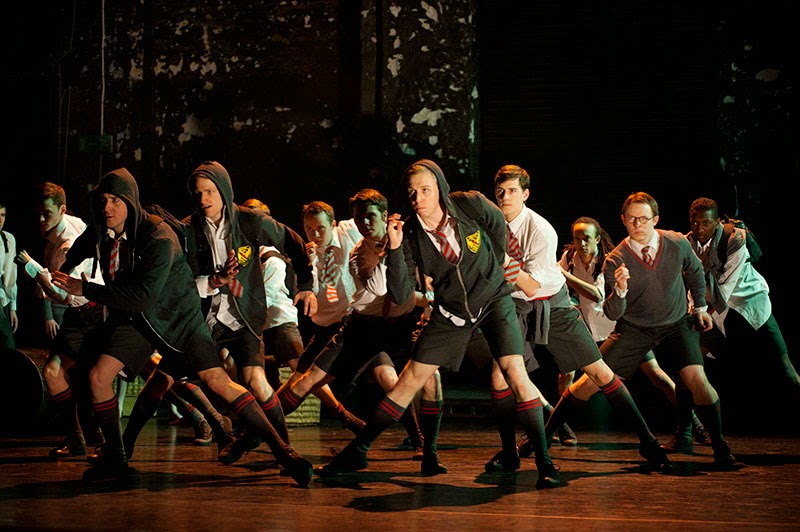 The Lord of the Flies
Photo Credit: New Adventures
(http://new-adventures.net/lord-of-the-flies)

Lord of the Flies requires one's imagine and appreciation of how complex humanity really is.  The simple story structure focuses on on the human nature tested at its maximum and is about group of school boys who are left on an island to their own devices with no adults or civil order.  Lez Brotherton sets the stage metaphorically as an island with its dimmed lighting, disused oil drums, and self sufficient props and structures.

Initially the school boys' life on the island begins with structure and the civilisation they are familiar with which is rapturously celebrated with games and adventures.  Suddenly the the seemingly utopia descends to an explosive dystopia where the boys go wild and rules and order disappear with no explanation!  Hunting and warrior instincts are exploded meaninglessly on stage with tribal movements and savagery movements.  There is no turning back to the civilisation that was once reigned. One's intent is to be pugnacious from that point forward!  The sounds and percussion elements of Terry Davies's musical score reflect the drama and dynamic energy shown from the cast as the story unfolds.

Golding believed how fickle human nature can be ...one minute from euphoria and then the next to extreme dystopia! He saw through his life experiences that human themselves are unaware the impact human nature can bring in circumstances and predicaments beyond one's control.  With Jack's (Danny Reubens) and Ralph's (Sam Archer) tribes attacking and defending into a disarray of violent events.  One can only relate today how unaddressed issues can lead to extreme consequences resulting from dystophic attitudes.

Being stunned is an underestimate in a production lasing just under two hours.  A powerful, energetic and shocking performance of school boys whose human nature is captured from innocence to dystopia in unusual and unfamiliar circumstances.  All under the choreography and direction of Scott Ambler and Matthew Bourne.  The talented cast is wholly supported by an ensemble of 24 young people from Liverpool and Merseyside who are part of an exciting project Re: Bourne, an organisation to secure the next generations of dancers.

A production of its sudden unfolding drama worth seeing!
Posted by Dawn Smallwood at 13:19