Tutti Frutti is presenting Evan Placey's WiLD this season.  Placey, an award winning writer, teams up with Tutti Frutti and Nottingham University's CANDAL to create this play on stage
. 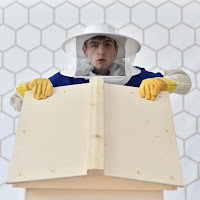 This one actor and one live musician play opens up the world of a vulnerable and imaginative boy who is often misunderstood.  Children with ADHD (Attention Deficit Hyperactivity Disorder) is often perceived as 'different', disruptive and naughty.  Billy, played by Rhys Warrington, invites the audience to see life from 'his eyes'.

The use of bees as illustrations for explaining the challenges Billy encounter 'Everything builds up like a swarm of bees' and 'words fly out and hover above me'.   He experiences exclusion and isolation along with being referred as third person in conversations between family, school and hospitals and expresses feeling of being like 'a bug in a jar with a sticker'.  When he has been given medication for his condition, he would describe the treatment for the 'bees in my brain'. 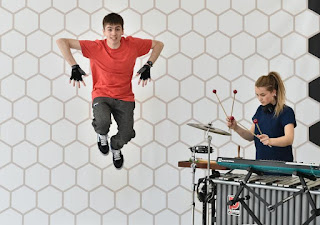 The play shares his passions for keep bees physically as well as relating to them figuratively.  They are grounds for his imagination, energy and passions amidst his innocence.  It draws to how unique Billy is and how much he is misunderstood from this circles around him.

The performance is versatile and energetic.  An intimate staging with a climbing frame and a beehive, which are used effectively.

Warrington sells the show with maximum velocity, athleticism and energy with 'bees flying through the illustrations of a bees' honeycomb on a screen and illuminated 'bees' flying.  The smoke creates the poignancy of the issue with its soundscapes and music with chordal echoes of the vibraphone.  Courtesy of Molly Lopresti and Elliot Clark.

The narration is the boy's matter of fact of life and, from his point of view, he is unable to comprehend why people perceive him negatively and his family's frustration.

This excellent play, directed by Wendy Harris, hopefully will open people mind's about ADHD and seeing the young boy's point of view.  This should lead to a great understanding and awareness for people and for parents to be sought appropriate support.

Tutti Frutti will be touring regionally including York Theatre Royal during this year's Yorkshire Festival.