Carmen, Alhambra Theatre, Bradford (On behalf of The Reviews Hub)

This was originally reviewed for The Reviews Hub and the link can be found here. 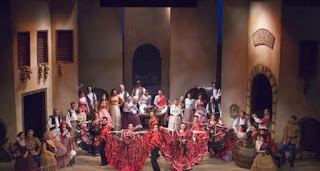 Opera & Ballet International is taking Ellen Kent’s Carmen all over the country, including a stop at Bradford’s Alhambra Theatre.  Bizet’s tragic and convention-breaking opera stars an international cast of soloists and a critically acclaimed orchestra.
Carmen was adapted from a novel of the same time by Prosper Mérimée and also the poem, The Gypsies, by Aleksandr Pushkin.  It was first premiered in 1875 at Paris’ Opéra-Comique.  The opera has come a long way from the poor reception and controversy from its premiere then, to becoming one of the most popular operas ever staged.  Carmen is performed in many opera companies’ repertoires worldwide and has been adapted to a number of screen and stage productions.  The music from the opera is synonymous to many things to many people, especially the overture and musical numbers Habanera and the Toreador Song.
Carmen is set around 1820 near Seville in Southern Spain.   It concerns a gypsy whose beauty seduces a soldier to desperation and their encounter leads to tragic consequences.  The music is popularly emotive and the orchestration musically interprets each of the story’s characters backed by the lyrics sung.
Liza Kadelnik, a Romanian international mezzo-soprano, portrays a seductive, dramatic, manipulative and fiery Carmen.  Kadelnik excellently projects Carmen’s strong personality and passions to her suitors, Don José and Escamillo. One particular highlight is when she first enters the stage in Act one and flirts with the soldiers during the passionate Habanera.   Other enjoyable highlights are the powerful duet by Kadelnik and Vitallii Liskovetskiy (as Don José) singing Seguidilla in Act one and in Act two the Toreador Song by Iurie Gisca’s Escamillo.  The chorus supports the ensemble roles including the younger performers from Stagecoach Theatre Arts across West Yorkshire.
There are some lovely touches including a local rescue donkey and horse appearing on stage.  Ben, the donkey, makes a presence among villagers and smugglers in the first and third Acts while ABFilmhorses provides us with Caspian, a white stallion horse, whose dressage skills by the rider impresses the audience to the overture in the final Act.
The Moldavian orchestra, under the direction of Nicolae Dohotaru, plays the passionate and dramatic music with enthusiasm and to Henri Meilhac and Ludovic Halévy’s libretto.  There is a presence of tambourines and castanets in the music which reflects the Spanish culture throughout.  The opera is sung in French with English surtitles which allow the audience to appreciate Bizet’s masterpiece in the original language as well as understanding what is sung.
Carmen is a fiery and passionate four-act production, which makes for an enjoyable evening.