2014 has arrived and let us see what theatre adventures are in store for me!  I would like to share with friends and blogs followers what I'm excited to see on stage during 2014. 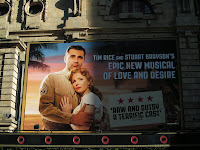 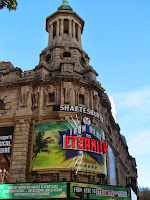 From Here to Eternity

The setting of Tim Rice's musical is in Pearl Harbor in 1941 and focus on two soldiers romantic relationships before and during World War II.  I've seen the trailer for the musical and it has prompted me to go and see it!

I've heard great reviews of the National Theatre's production of the timeless classic interpreted on stage by lyricist Tori Amos, playwright Samuel Adamson and director Marianne Elliott (who directed Curious Incident and The War Horse).  The musical stars the talented Rosalie Craig.  It will be my first time I've seen a production at the National Theatre complex.

Strangers of a Train

I haven't seen much of Alfred Hitchcock's works.  So seeing Strangers on a Train will give me an opportunity to appreciate the production and learn more about the author's style of telling a story/plot which this one is dark and intriguing.

I'm intrigued seeing Conor McPherson's sinister play which had its sell out run at the Donmar Warehouse and transferred to the Wyndham's Theatre.  This will be my first ever Donmar Warehouse Production I've ever seen on stage and this will be followed by the live screening of their newest sold out production Coriolanus at my local Everyman cinema.

I recently saw the documentary on ITV (UK Independent Television Channel) about the Profumo scandal presented by Andrew Lloyd Webber and how Stephen Ward because the 'The British Scapegoat'.  I'm more keener to see this new musical.

I didn't know much about Bernstein works except for West Side Story however I did hear the overture score at a concert last year.  I'm curious about the operetta (it's classified more so than a musical) based on the Voltaire Novel and produced by Menier Chocolate Factory.  With a stellar casting and a talented creative team I'm sure it will be a great production.

I plan to see this play at the Gielgud Theatre in spring.  I'm curious about this Noel Coward play with its spirited and intrigued play starring Angela Lansbury, a Broadway legend.  It would be great to see the the original Sweeney Todd's Mrs Lovett perform live.

As well as these new productions along with Shakespeare in Love which is opening at the Noel Coward Theatre in the Summer.  Even if there is no guarantee I'll see them all but it should be an exciting year of theatre in London and also Regionally!  I also look forward to making my debut to Jersey Boys and my anticipated return visit to Mamma Mia after an absence of nearly 14 years! I await the return of Miss Saigon to Prince Edward Theatre and also revisit some of my favourite musicals.

Have a happy theatre going 2014 everyone! x