Propaganda: Power and Persuasion at The British Library

During my visit in London at the end of July I took the opportunity to visit an exhibition at the British Library, Propaganda: Power and Persuasion. 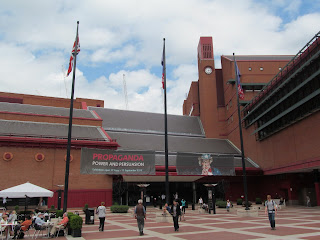 There were some interesting interviews by David Welch and Noam Chonsky as to how Propaganda is perceived by many and how it is used to influence and persuade people.  What struck me was the quite I saw as I entered the exhibition hall, 'Everything is Propaganda' (I don't remember who this quote is from).  I always believed propaganda was a rhetoric used for nationalistic and political agendas.  The exhibition was divided up into a number of sections including its origins, nation, war and health.

Generally and traditionally, propaganda is linked to negative connotations and this is usually an automatic presumption from the majority of people including myself.  The Queen's Jubilee and the 2012 Olympics were used as propaganda to boost the moral of the nation and raise the profile of the UK to the rest of the world.  Many believe from the interviews I watched and listened considered these events positive.

The most significant experience from the exhibition which stood out for me was the Zoe Fabain's discussion about women and marriage. She disliked the social propaganda about the need for women in era then to get married.  Her beliefs led to the founding of St Andrew's Women's Liberation Group in 1970.  The slogan, 'YBA (Why Be A) Wife'.  I would imagine these would contribute towards further awareness of women's empowerment and liberation itself.  This is something I can relate to personally.

The exhibition concluded how social media is used as propaganda from all walks of life whether it's rhetorically or socially.  I can share some personal examples from a social perspective and I agree with Iain Dale who quoted this as a 'Loud media'.
The exhibition is on at the British Library until 17th September 2013 and further information including booking is available on the website.
Posted by Dawn Smallwood at 12:57