Entering into my last day of being 39 and penultimate day of my epic trip I queued very early for day tickets to see Wicked.  I had a run in with an someone who accused me of pushing in and not remembering I was in the line before them! However I blame my former friend for not joining the back of the queue like everyone else! Never mind I met up with my friends whom I was going to spend at least the day with them. 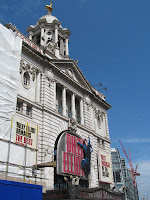 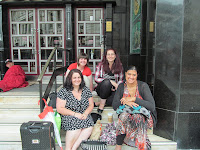 Met up with Rachael, Melissa and Emma
when we queued for Wicked tickets.

We (Sophia, Lizzie and I) had some errands to do such as checking in our hotel and lunch at Kings Cross before returning to Victoria.  On our return we booked seats for Billy Elliot at the Victoria Palace Theatre.  Sophia treated me to my ticket - a big thanks, Sophia!  We had great seats on the front row and the theatre was air conditioned which was perfect for the hot day we were having!  I plan to do a separate review (please see blog) about Billy Elliot but I can say is that I thoroughly enjoyed it! The cast were exceptional especially Tade Biesinger who played Billy.  His multitasking talent with his acting and dancing was amazing! I loved the social issues which were raised and anyone can relate to such as the miners strike in 1984 with its politics, sociology and the affected communities.  This was married with Billy's ambition to pursue his dreams to become a dancer which seems to have been an unheard thing for a boy to pursue in his community. It was a great show and I definitely want to see it again! It was certainly well received in the audience. Information information about Billy Elliot is available via the website. 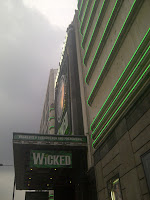 Afterwards we had a snack at the nearby Pret A Manger before heading over to Apollo Victoria for the evening performance of Wicked.  I've seen Wicked twice before and thoroughly enjoyed my third visit to the show! Gina Beck (Glinda) and Louise Dearman (Elphaba) were incredible and I was amazed by the chemistry between them! They work very well together.  The cast did a great job and it's always a pleasure seeing Wicked.  I look forward to my next visit in Leeds when Wicked tours.  Not long now before the tour opens at Manchester's Palace Theatre!  I was very tired after the show thanks to lack of sleep the night before so we just returned straight to the hotel.  Life will begin the following day! More on Wicked via its website!
Posted by Dawn Smallwood at 13:20