New Year Day brought me to CATS at the London Palladium, my first show of 2015!


CATS is one of my very favourite musicals and I had the privilege seeing it on the UK Tour in 2013 and 2014 in Bradford, Liverpool, Llandudno and Birmingham.  The more I see CATS the more I appreciate Andrew Lloyd Webber's musical and the show's context.

I was curious to see the new revived production in London after a 12 year or so gap from where it was last in the West End,  I remember the memorable visits to the New London Theatre where, in 2001, I saw Dave Willetts as Old Deuteronomy and John Partridge as Rum Tum Tugger.  Speaking of the character I have to admit I was sceptical with the changes that were planned - A rapping Rum Tug Tugger! I absolutely loved the character's changes and fits so well with the personality and demeanour he has on the stage and with his feline peers.  CATS is certainly moving with the times - in the past the character concerned was influenced with Elvis Presley and Rock and Roll.  Antoine Murray-Straughan gives a first class portrayal and ensures CATS remain fresh as it was when it first opened in 1981. 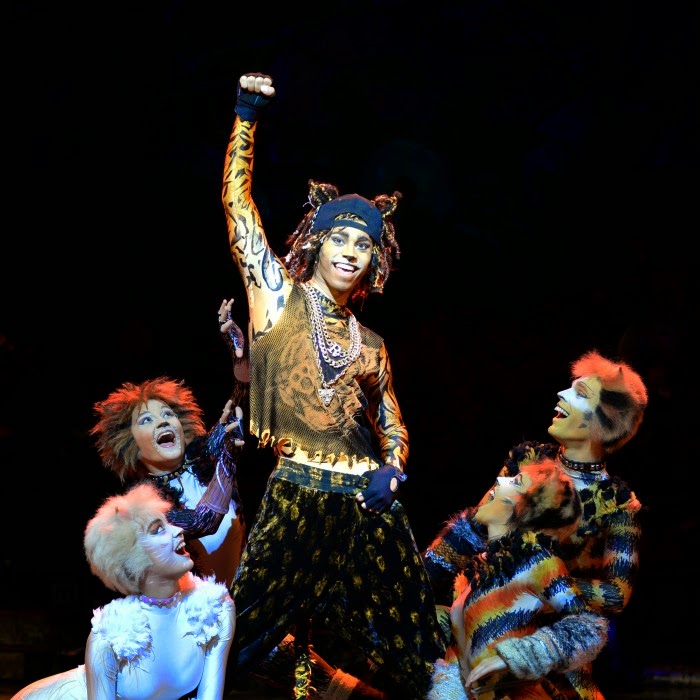 Antoine Murray-Straughan in the Revived Production of CATS at the London Palladium
Photo Credit: Really Useful Group (From http://london.catsthemusical.com/)


London Palladium has a huge stage however no compromise was made for a bigger playground for the cats to roam and play!  I especially was delighted to see Sophia Ragavelas as Grizabella whom I saw in the role on the UK Tour in Liverpool, Llandudno and Birmingham.  As expected her portrayal of Grizabella is spot on and of the highest standard.  She brings so much depth emotionally to the character that one feels for what Grizabella was and is going through.  I saw members of cast whom I saw on the UK Tour in this production and as always they perform exceptionally well; telling the story of T.S. Elliott's Jellicle Cats through song, mime, dance and acrobats.

CATS certainly has something for everyone.  It's certainly a show you either love or hate.  For me, I was raised liking it and now reborn loving it so much! Along with Miss Saigon it's another favourite musical of mine! CATS is my greatest ever start to 2015! You can me my reviews (click on the links) when I saw it in Birmingham, Llandudno, Liverpool and Bradford.  I always have something to say about CATS!

CATS is on a the London Palladium until Spring 2015.
Posted by Dawn Smallwood at 08:50