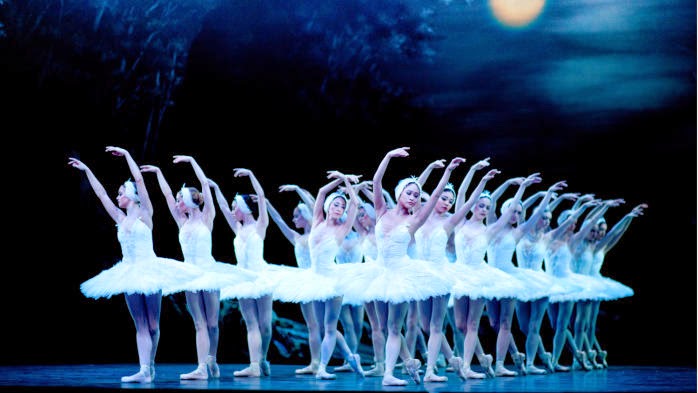 
English National Ballet's Swan Lake is playing at the Coliseum until 18th January 2015.  Choreographed by a team of choreographers including Derek Deane and Frederick Ashton.  Tchaikovsky's Swan Lake never fails to amaze and move one emotionally with its story and music interpretation! Ivan Vasliev and Alina Cojocaru, leading artists, starred as Prince Siegfried and Odette/Odile respectively in this performance.  Their incredible and intricate pas de deux(s) don't appear unoticed especially during the introductory Act II and the fateful Act IV.


The swans themselves dance in unison and beautifully particularly in Act II's Dance of the Swans.  The exquisite dancing is supported by Peter Farmer's stunning sets and Howard Harrison's lighting certainly reflect the story's characters and mood.

Cultures are represented and serenaded with dance in Act III's royal ceremony which suggest the political empires and monarch that reigned in Tchaikovsky's time.  One appreciates the diverse music representing these empires' and countries' cultures.

Swan Lake whether the interpretation is classical or contemporary always capture everyone's heart with the prince's love for a swan queen and their fateful journeys ahead of them.  An amazing production all around!
Posted by Dawn Smallwood at 13:38