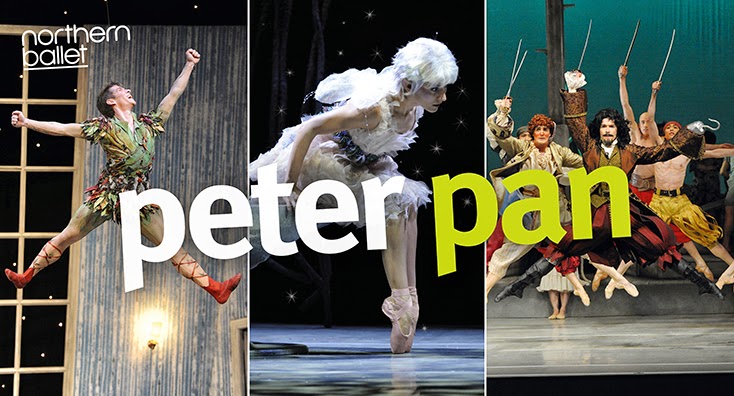 My niece and I went to Northern Ballet's Peter Pan at the Grand Theatre in Leeds.   It was my niece's first ever ballet (certainly won't be her last!) and she kindly offered to share her thoughts of Peter Pan:

"Loved Wendy (performed by Rachael Gillespie)...very pretty"
"Loved the part where they were flying"
"The mermaids were awesome! How did they dance in their tight costumes?"
"The dancing showed off Tinkerbell's (played by Miki Akuta) cheeky character"
"Good when it didn't tell that they were changing the scenery"
"Loved the costumes...were absolutely amazing!"
"The orchestra...music set the scene and the mood.  Great expression of emotion and story"
"Loved the crocodile (performed by Mlindi Kulashe) and the dog was so cute"

In conclusion:
"I would love to go and see something like this again"
"Inspired to take up ballet again"

Based on J.M. Barrie's classic, David Nixon's production returns to Leeds for two weeks where one has an opportunity to travel with Peter Pan and friends in Never land.  Never land offers adventures up in the night and descend in uncharted lands sprinkled with fairy dust. Surprises and dangers are encountered including Captain Hook's desire to avenge Peter Pan and Tinkerbell's fickle actions impact on the magical adventure taken by all!

The beautiful, magical and imaginative story is complemented with effortless flying, romantic encounters, intricate fights and the incredible dancing by Northern Ballet's Corphyees and dancers and with Peter Mumford's (known for his work in Hampstead Theatre's Wonderland and Almeida Theatre's Ghosts) great sets.  Stephen Warbeck's music, like the dancing, beautifully the story beautifully with each note and beat representing the diverse moods.  The clock chimes link characteristically to the original story's features.

A production one must not miss and is playing at Leeds Grand Theatre until 20th December 2014.