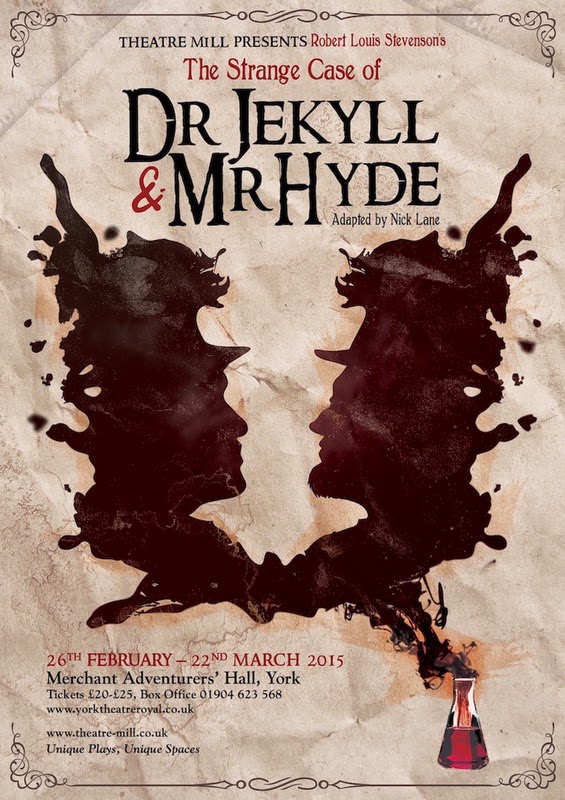 "This won't change the face of science; it will change the world" - Theatre Mill's The Strange Case of Dr Jekyll & Mr Hyde

Arriving at York's Merchant Adventurers' Hall one is greeted by front of house staff adorned in Victorian costumes warning everyone about the recent murders committed.  After a brief visit to the tavern, one is welcomed in the hall's under croft with an accompaniment of dim, atmospheric and sinister ambiance.  The 'theatre in the square' is perfectly set for a dark tale to be told in which case is The Strange Case Dr Jekyll and Hyde by Robert Louis Stevenson with Nick Lane's adaptation.

The stage is perfectly and appropriatly laid out with Dr Jekyll's laboratory which assumes where the scientist's experimentation with nature and science is carried out.  The play introduces the characters Gabriel John Utterson, played by Adam Elms, Dr Hastings Lanyon, played by David Chafer, and Eleanor Lanyon, played by Viktoria Kay who masquerade themselves.  They share their stories and give their testimonies about their relationships and experiences with Dr Jekyll and Mr Hyde throughout various stages of the performance.  Lane is keen to have a central female character, such as Eleanor, in the production which is a fitting tribute to Stevenson's wife, Frances, who was proud literary critic of his works.

The story is written at time where a breakthrough of medicine was established for treating Rabies, diphtheria and cholera and no doubt Dr Jekyll wanted to reenact this with his medicine research in the case of treating patients with mental health illness.  As he shares in this performance he was no doubt appalled to how these patients were institutionalised and treated with little or no dignity and was keen to help them.  It was also at a time of civil unrest where the the order of traditions were challenged by changes in society's attitudes with demand for more human/individual rights.

Dr Jekyll, played, by Simon Weaver, with his research being rejected, takes matters in his own hands and explores the full onset of man's nature with science which leads to terrifying consequences.  Andy Pilliner's lighting and Samuel Wood's soundscapes gives such a successful transformation of the frightening shift of nature between Dr Jekyll and Mr Hyde.  There may be a slow build up to the crucial part of the story however this encourages the slow sinister intriguing build up which subsequently leads to a testing, dramatic and emotive ending.

The use of the mask for identifying the difference between good and evil is done effectively.  The use of Bec Andrew's staging is used to the maximum and the simple props ensure the audience is able to pay full attention to the cast themselves , played by an excellent cast, adaptation and production.  Theatre Mill takes pride in using unique space and venues for their productions.  This is no exception to the this production.  Soon audiences will be summoned either in Leeds or York  for Agatha Christie's Witness for the Prosecution.