The Honey Man – Carriageworks Theatre, Leeds (On Behalf of The Public Reviews)

This review was originally written for The Public Reviews and the review can be accessed here. 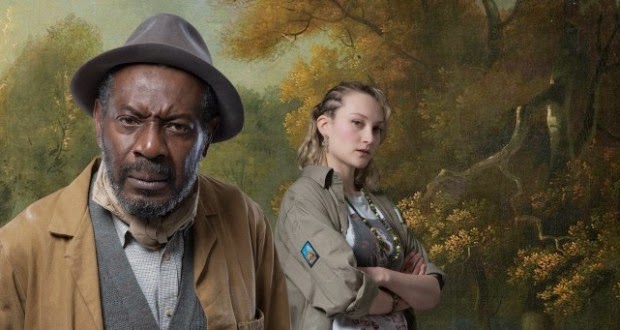 Accessed from The Public Reviews
(http://www.thepublicreviews.com)

The Honey Man looks at two characters who could not be any different; total opposites who never thought they would end up sharing a number of things in common.  This two person play follows Honey Man, an elderly West Indian recluse who lives alone in a derelict cottage and keeps bees for producing honey.  He relies on his self-belief philosophy to impart wisdom and knowledge for aiding his health and wellbeing.   However he falls ill and there is something not right with his bees; which prompts him to look for help outside.

Misty (Beatrice Allen) unexpectedly turns up at Honey Man’s cottage only to reveal that she has and knows it all; privileged background and is always connected, digitally, to her family and friends.  This is evident with the interruptions when her mobile phone constantly rings during their conversations.   However all is not good with her; her parents are divorced and her family are victims of the credit crunch which results in her ancestral home becoming a hotel.  She also has to conduct house tours to tourists, something she would rather not be doing.

There is certainly a contrast of personalities which do clash following initial perceptions of one another.  Misty appears confident, arrogant and rebellious at the beginning but gradually opens up to Honey Man, whose richness of metaphoric language imparts his warmly wit wisdom on the young woman – by then her vulnerability and insecurities come to the forefront.  He realistically illustrates the use of the bees and their activities parallel to humans’ habitats and their responsibilities.  He quotes logically about giving and taking, “No bees, no honey” linking to “no work, no money”.  Tyrone Huggins, the writer and who plays Honey Man, analyses the characters; he views Misty as digital – modern, connected personally and technologically, educated; whereas he sees Honey Man as analogue– traditional, simplistic and wise from his older years.

There is a creative use of visuals projecting Concord Manor, where Misty hails from, and Honey Man’s cottage.  Each habitat is never out place with Timothy Bird’s staging and the multipurpose wardrobe, centrally staged, is used for both homes and as a visual projector.  Joseph Robert’s soundscapes of the bees capsulate the spirit and livelihood of Honey Man that warmly draws in the audience throughout.

A diverse range of themes are explored in The Honey Man especially the importance of intergeneration; traditional versus modern; the difference between being alone and being lonely; and digital friendships verses face to face true ones.  Probably the important play’s theme is the connected heritage from a picture in Misty’s house that is digitally projected in the second act.  This is where Misty begins appreciating, which she initially dismissed, of her ancestral heritage which is tainted with the dark history of slavery.  The picture links the historic connection which both she and the Honey Man unexpectedly have in common which is enhanced by their reprisals of the two key characters from the picture. The honey they sample symbolises the emotional journey they experience together from their unlikely friendship and life learning.  It is from then on when the picture corner frames vertically assembled on stage have this sudden meaning to the play and its themes.

With this being the final performance on the tour, Higgins afterwards cordially thanks the producers and creative team and also the audience for coming to this production.  The Honey Man is a thought provoking warm play which explores primarily intergeneration and shared history and certainly a recommended production!