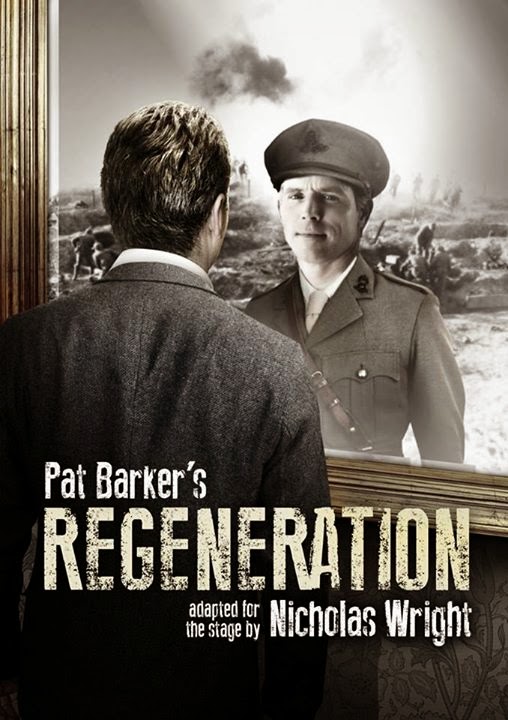 
Pat Barker's Regeneration, is co-produced by Touring Consortium Theatre Company and Northampton's Royal and Derngate, is touring nationally including a stop at Bradford's Alhambra Theatre.  Set in the First World War, Nicholas Wright's stage adaptation of the story is about Siegfried Sassoon (played by Tim Delap) being sent to Craiglockhart Hospital for 'shell shock' and other 'mental health issues' following his declaration about the war.  Sassoon meets Wilfred Owen (played by Garmon Rhys) who both form a close relationship.  Sassoon is treated by a psychiatrist, Dr Captain Williams Rivers (played by Stephen Boxer), who take care of she shell shocked patients, serving from the front, to rehabilitation.

The play explores the complexities and ambiguities of the First World War where no definitive opinions or answers could be given.  The issues raised are left to the audience to draw their conclusions from the play presented.  The characters coherently share their experiences from serving in the war to their struggles dealing with shell shock and psychological disturbances.  It feels like the play is giving a psycho-analysis of how the soldiers felt when fighting whilst being at Craiglockhart Hospital.

The powerful messages given indicate how the war was in general with its insatiable desire for patriotism to the unnecessary deaths of many soldiers who fought.  This raises the issues about First World War being experienced from the soldiers first hand and how the issues raises a wide range of discussions about warfare in general especially today.  With 2014 being its centenary of the First World War, proof such as Sassoon's declaration Finish With War and Owen's Anthem For Doomed Youth invites many to question the war.

Psychological and mental health are probably the biggest messages raised in Regeneration.  A high number of soldiers were treated at the military hospitals.  Ignorance was rife then among the military misunderstanding and misinterpreting the difference between shell shock and cowardice and desertion, which those actions were punishable with ostracising consequences.  Captain Rivers used psychoanalytical techniques to give patients an opportunity to download their thoughts and emotions which helped many of whom returning to the battlefield.  However Rivers persuaded the Board to reassign some soldiers to civilian duties such as in the case of Owen. Mental health and psychological disorders are issues among the military today with many soldiers suffering from past traumatic stress disorder and other mental health problems.

Great use of effects, devised by both Lee Curran and George Dennis, of light and soundscapes choreographed movingly and dramatically - reliving the soldiers' nightmares when they fought in conflict.  Staging aesthetically designed by Alex Eales bring the story alive with Stuart Earl's musical accompaniment.  A thought provoking play Regeneration is, which sure will promote contextual discussions about what the First World War is really about.

It is certainly a play that gives a powerful anthem, by the excellent talented cast, for soldiers past, present and future; the war brings more than just literal war fare!
Posted by Dawn Smallwood at 08:48