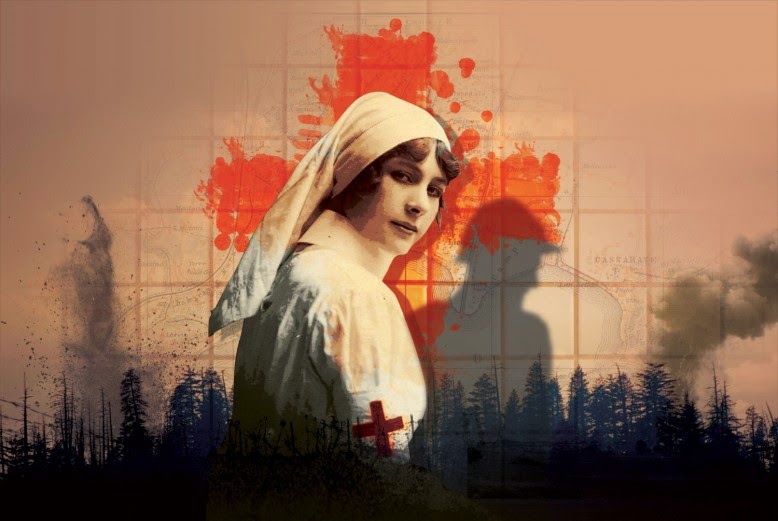 
This hi-tech production of Hemingway's A Farewell To Arms brings the classic live on stage.  imitating the dog, reputed for their technological experiences, is co-producing this production with The Dukes and currently on tour.  Starring Jude Monk McGowan (as Frederic Henry) and Laura Atherton (as Catherine Barkley), the story is about an American ambulance driver, serving in the Italian army, falling in love with a British nurse during the First World War.

Imaginative and exciting use of visuals and projections of the book's texts are used to tell this powerful love story and capturing the deep and intimate love between Frederic and Catherine.  Simon Wainwright's projections enhance the lovers' intensive, redemptive and powerful relationship with close up snapshots shown on the screens during some of the scenes.  These all link with the light and soundscapes reflecting the mood, courtesy of Andrew Crofts and Steven Jackson.

For full appreciation of the novel's narrative, surtitles are shown stage during the Italian and French dialogues.  Laura Hopkins's staging resembles a ruined building which reminds one contextually of the conflict and warfare of the First World War and the suffering from the devastated consequences, which Frederic and Catherine were not immuned to.  The narrative is given the chorus, members of the cast, who focuses on the two protagonists and loosley draws to their fates and the story's eventual conclusion.

The productive spirit of the drama, adapted by Pete Brooks and Andrew Quick, fits appropriately in Michel de Certeau's thought:

"Reading makes the text habitable like a rented apartment.  It transforms another person's property into a space borrowed for a moment by transient"


Cameras are cleverly used to shoot each chapter for 'forensic evidence' of the lovers' journey so that future readers can know what actually happens between Frederic and Catherine.  Like Hemingway, this adaptation encourages the audience (as the readers) to 'read', draw their own conclusions and be sensually enlightened to interpret in their own minds the story.

The cast uses this opportunity to capitalise on this powerful and moving story leaving cues how everyone can relate emotionally.  A moving production with the most amazing hi tech adaptation seen on stage.  Hemingway's A Farewell To Arms is being brought to life as a 'reading' one stage which as the 'book'.  Certainly a must see and please check out further details including tour dates about imitating the dog by clicking on the link.

Source:  A Farewell To Arms Programme