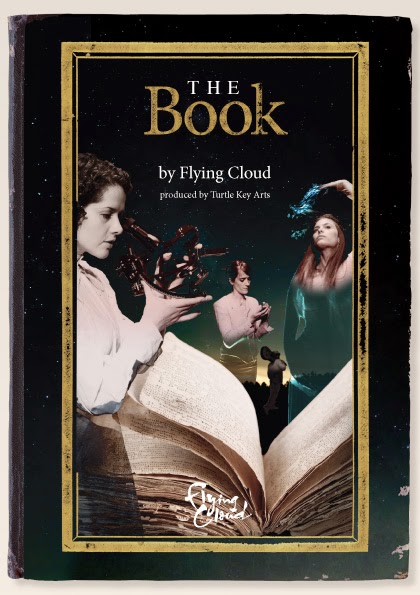 Flying Cloud Theatre recently presented The Book, currently on its UK Tour, at York Theatre Royal during June.  The Flying Cloud, founded by Leandra Ashton in 2010, takes proud in empowering and inspiring one and all in theatre creativity.  The Book was written by Leandra Aston, Marta Rizi and Jennifer Kidd, all actors in their own right; directed by Kidd and and Tom Cornford; and produced by Turtle Key Arts.

The Book invites intimately the studio audience to join them on a physical, metaphorically and imaginative journey over a 1000 years.  The play opens in 2034 where the book is king; unopened, no questions asked or no doubts or opinions encouraged and other books are forbidden!  Then the play continues and travels back in time to the present, 2014, where there are debates and warfare by groups fighting over their dominion of their books.  Finally, before returning to 2034, The book is traced back 800 years earlier where there's an opportunity to understand the book's creation and intent.

At the time of the book's creation, around 1214, the setting was in Al Andalus, a Medieval Islamic state. in Spain.  Under Muslim rule there were inhabitants of all faiths and cultures who worked in collaboration and co-existence to discover and explore new things such as mathematics, medicine, science and so forth. The curiousity and commonality bound them together and undivided the good work that was done.  This laid the foundation and influence towards the Renaissance and beyond.

The Book raised themes that are of relevance to each one of us today in society such as identity, freedom and humanity.  The play encouraged everyone to think creatively of themselves through their thoughts and curiousity.  The audience were invited to write or rewrite from their hears their life chapters of their 'book' and not read their next chapter that is figuratively posed in from them from 'internal books'.  The 'internal books' are the beliefs, cultures and traditions that are willingly or unwillingly have been passed onto from family, society and authority.

Instead of being prescribed of one's identity from expectations where curiousity, exploration and questioning aren't encouraged.  This probably explained the conflict happened in the play, during the present and 2014 scene, about how suppression and familiarity breeds contempt.  Common humanity and friendship are also explored where divisions are posed as challenges.  Even today in communities and united by cohesion and unity ethnic and cultural divides continue to exits even if community leaders are trying hard and encouraging 'everyone is welcome'.  However and realistically divisive factors especially language barriers and deep rooted traditions where many books weren't 'opened' exist.  Amin Maolouf optimistically said that all can either be 'bound together by the same universal values' or be divided into a 'common barbarism' (source: The Flying Cloud).

The Book concluded with the opening of the forbidden book and offering opportunity and hope for people to feel empowered, inspired and not be dictated by the 'inner voice' which indoctrinates not to be truly themselves.  The point is not to judge a book by its cover and take one's word...open the book, learn and explore!

The intimate setting of York Theatre's Royal Studio was done in an intimate space where the audience were part of the journey whether through time travel or life.  A play well done and highly recommended!  Please check out The Flying Cloud's website for further information on this production and future projects!