Lives of a Rock Star! 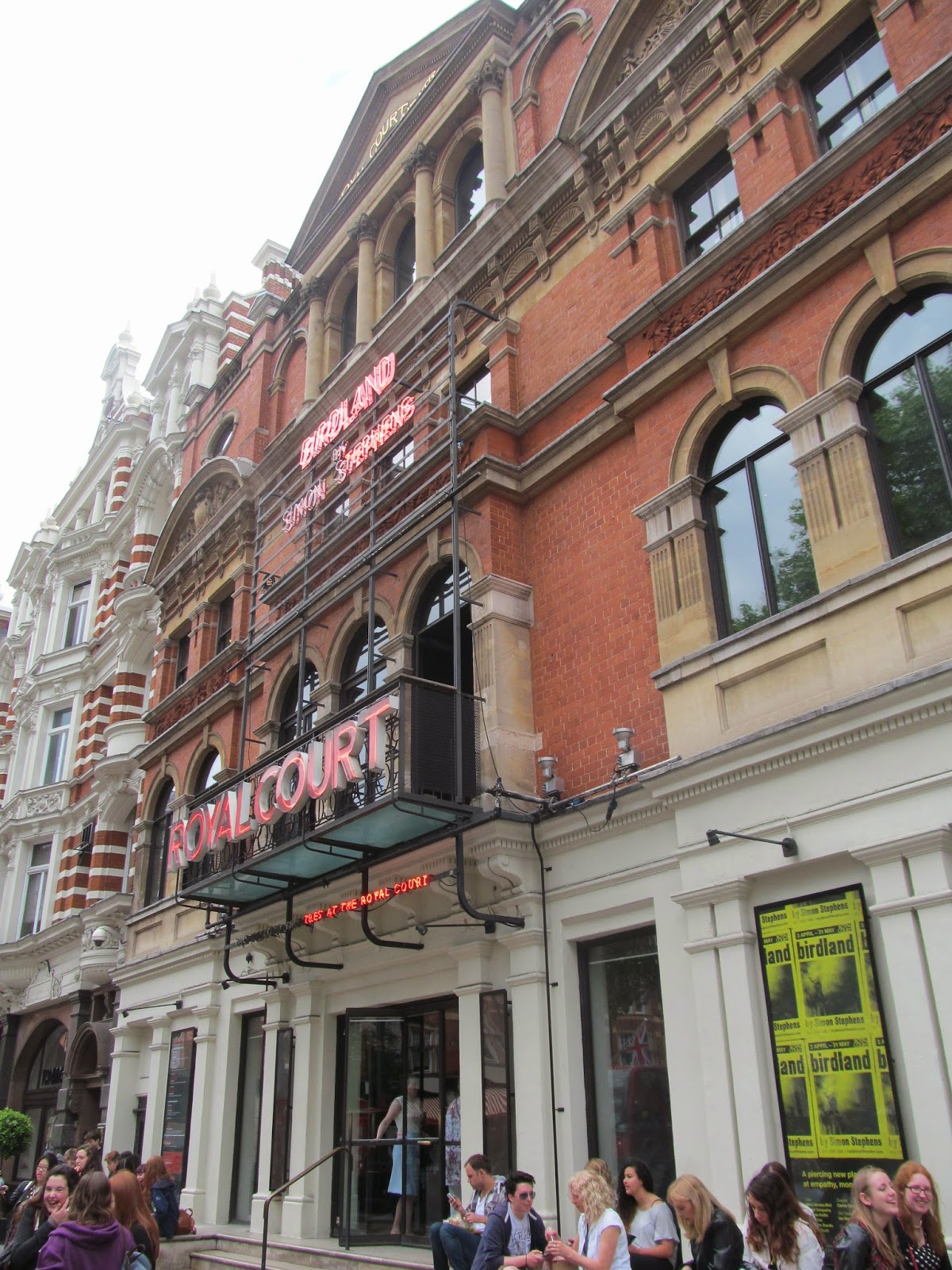 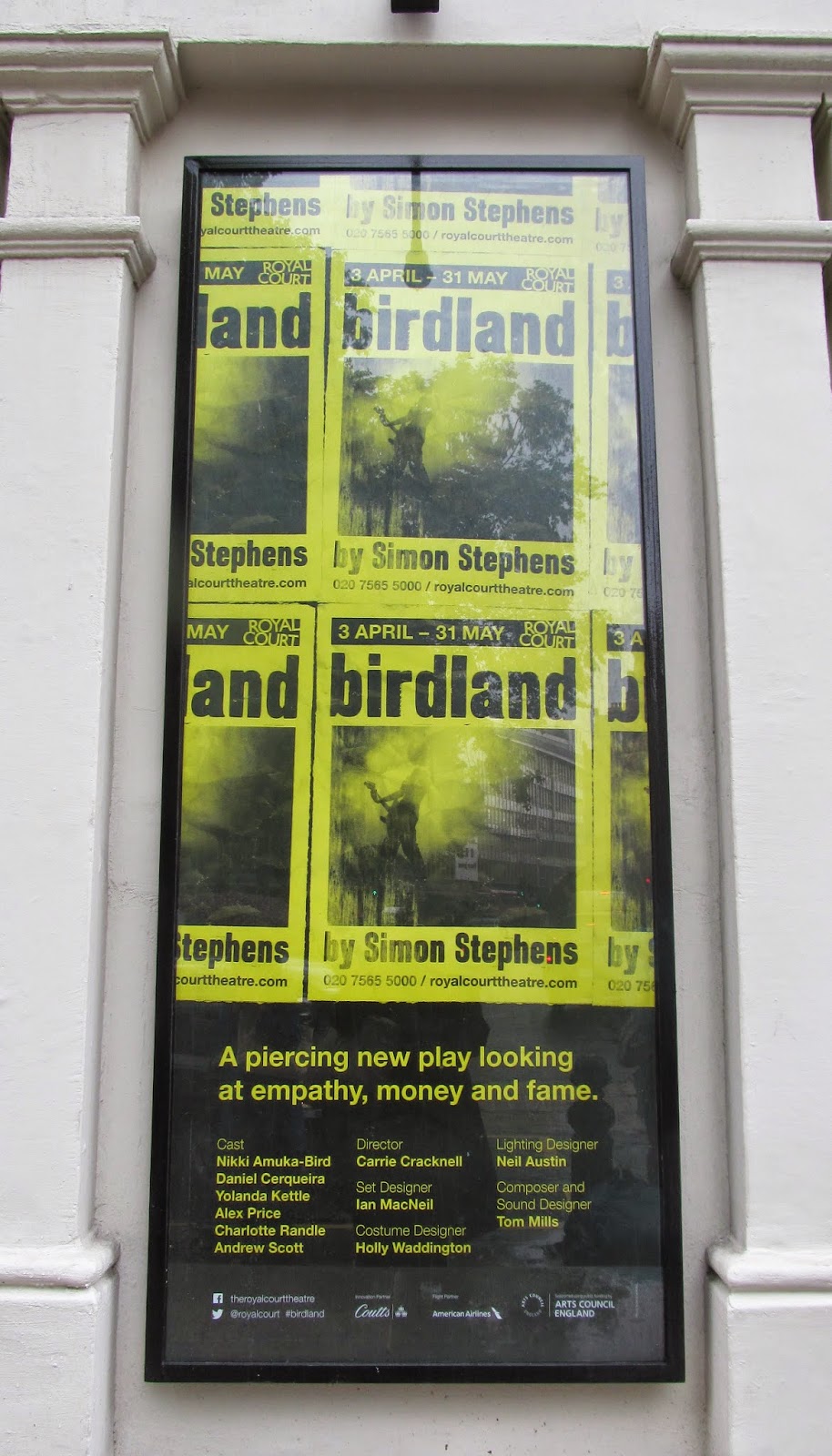 
Simon Stephen's Birdland, directed by Carrie Cracknell, was on at Royal Court Theatre in London during April and May 2014.  The play tells us about Paul (played by Andrew Scott), a famous rock star who was at the height of his rock career.  He almost completed his international tour and he always had everything his heart desired.  On the conclusion of the tour, things don't appear as they seem with reality of home soon kicking in and how his fame and money is measured to what really matters including those who care about him.

Birdland gave the audience an honest snapshot about a lifestyle of the celebrity. The staging, by Ian MacNeil, is set crucially with a contrast of a materialistic rock star life and the potential simplicity an ordinary life.  The lighting, by Neil Austin, was dim with a unique cue when Johnny, played by Alex price, existed to daylight (matinee performance was seen) from a back stage door.  One wonders if this gave a figurative feel of Johnny finishing one life chapter and beginning another one after he and Paul parted as friends. It is admired how the water on the ground surrounding the centre stage gave a naturalistic 'barrier' from the tour and its inevitable connections of home.  The sound and music, by Tom Mills, interacted with the 'concerts' and the characters' moods.  The scenes linked perfectly with one another so the audience saw a continuation of Paul's life on and off stage without pauses.  When the actors finished their lines they faded and stepped back from centre of attention.  The described staging is aimed to give maximum attention on the characters and plot at the time.

The rise and potential fall of Paul's rock star career was explored in the play.  The characters shared their stories pinpointing them including the singer's sex and promiscuity; jealously; his interactions with fans (such as the case with Louis (played by Daniel Cerquiera).  There were also some grave issues concerning Marnie's (played by Yolanda Kettle) suicide; his run with the law and its potential consequences; and potential financial ruin. Paul's arrogrant, aloof and selfish attitude gave an impression that he was out of touch with reality until now.

Reality awakening seem to have happened when Jenny (Nikki Amuka-Bird) confronted Paul about how he treated everyone and that he should re-examine himself even if he's a big rock star with many fans!  David (played by Daniel Cerqueria) was honest with Paul of the potential consequences concerning the relationship between him and a women who alleged to have been a minor and stating that there would be 'a fine and lengthy heritage of songwriter in jail' (Birdland, 2014) if proven guilty.

Paul (Andrew Scott) at some points in the play began questioning his life journey through self and philosophical analyses.  He testified how things such as money and fame can affect and obscure one's thoughts about people and their feelings.  It might suggest the singer was experiencing guilt and conscience crisis.  He is indirectly advising the audience that his rock star life may appear exciting and glamourous but figuratively empty with pangs of loneliness.  He echoes these thoughts when he exclaimed about the stage being emptied.

Ultimately after his reunion with his father, Alistair (played by Daniel Cerqueria), Paul emerged with a new sense of cautious optimisim.  He intends to settle down with a 'proper job' and stated personally that he has lived without money before and will live without money again.  In conclusion he stated, 'When you can see the things that I've seen and go to places I've been to.  When you can do all that you don't die' (Birdland, 2014).

Birdland is an honest and thought provoking play which explores fame and money and these can affect celebrities and their relationships.  Emotions are raw, played by an excellent small cast led by Andrew Scott, from those who were affected in the final week of the international tour and the thought of home.  There are parallel stories of celebrities today who are affected similarly to Paul and they too share their experiences.  Birdland gives a lot of food for thought and perhaps awarenesses that fame isn't what it seems for one and all!

Birdland has now closed at the Royal Court Theatre but check out their website for their up and coming exciting productions!