Sister Morticia recently saw Hiraeth's Hamlet at the Riverside Studios.  Hiraeth Artistic Productions was founded by Zoe Ford, a Scottish actor, in 2012.  The company takes pride in being daring with their 'perform and create' productions which have attracted many theatre going supporters and have received critical acclaim.  Sister Morticia is an avid supporter of their works and would like to share her thoughts of their bold but brilliant Hamlet, currently playing at the Riverside Studios until 22nd June 2014.  Sister Morticia is more than happy to share with us her thoughts of Hamlet: 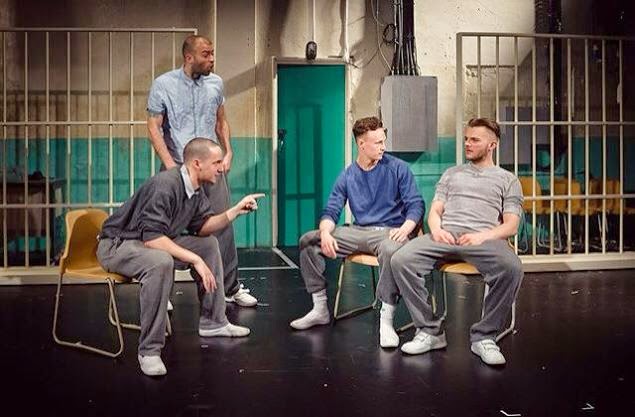 
If you're a lover of doublet and hose and traditional interpretations, this is Hiraeth's production of Hamlet at the Riverside Studios is NOT the show for you; if you're looking for doublet and hose, Hamlet strolling along the castle battlements, Orphelia wearing a lovely dress, just walk away now and don't look back, there's nothing to see here.


However, if you like to see an exciting, physical production with a burning heart, a great cast and a very different take on a classic then it's definitely worth a ticket.


This Hamlet is set in a Liverpool prison, with all the colourful language and violence that goes with that setting.  Shakespeare's prose is surrounded and entwined by modern day asides and additions in keeping with the characters, that brings the whole production very much into the present and makes it clear what each character is about as well as making the whole production feel current and alive. It is an exhilarating, brutal, violent production with bare knuckle fighting and shanks replacing duels and swords, energising to watch and very moving in places. Adam Lawrence looks to be a boy band angel of a Hamlet who rails at rages at outrageous fortune, but fights like a demon when he needs to, relying on his friends and cellmates to prove his father was murdered. His Orphelia is the prison social worker, wearing the ring that was confiscated from him when he came back to his cell and breaking up fights between inmates as Hamlet's madness stirs them all up. She is the only compassion and feminine softness in this harsh, male-dominated institution. This production also contains the most powerful Rosencrantz and Guildenstern I have ever seen – no gullible clowns or loveable Scallies these boys; they are a pair of vicious mercenary thugs that you do not want to meet in a dark alley. Christopher York's Rosencrantz is slack jawed and cruel but Nathan Whitfield's Guildernstern is a reptilian, creature; prowling the stage,waiting for a fight, boiling over with menace and threat. Their attack on Horatio is vicious and bloody and they are relishing every kick and punch, leaving him a bloodied mess.


The set is minimal; bars for the cells, a desk, a CCTV screen so that Claudius and Gertrude – a middle aged power dresser, all pleather skirt and big sunglasses – can spy on Hamlet and Orphelia, but it works and the lighting is extremely powerful.  The fight scenes are realistic and brutal; sit in the front row and you find yourself flinching away from flying fists and spraying blood, and the language is equally strong. But there are moments of comedy and that very base language makes the characters more natural and easily recognisable in a modern setting.


Definitely not a production for everyone, but absolutely one of the most exciting, energising and visceral theatre experiences that I've had this year, one to get your blood pumping as you watch and to make you see the text with new eyes.

Hiraeth Artistic Productions can be followed on Twitter and there is further information about their work and their present and up and coming projects on their website. Looking forward to catching one of their productions in the not too distant future.