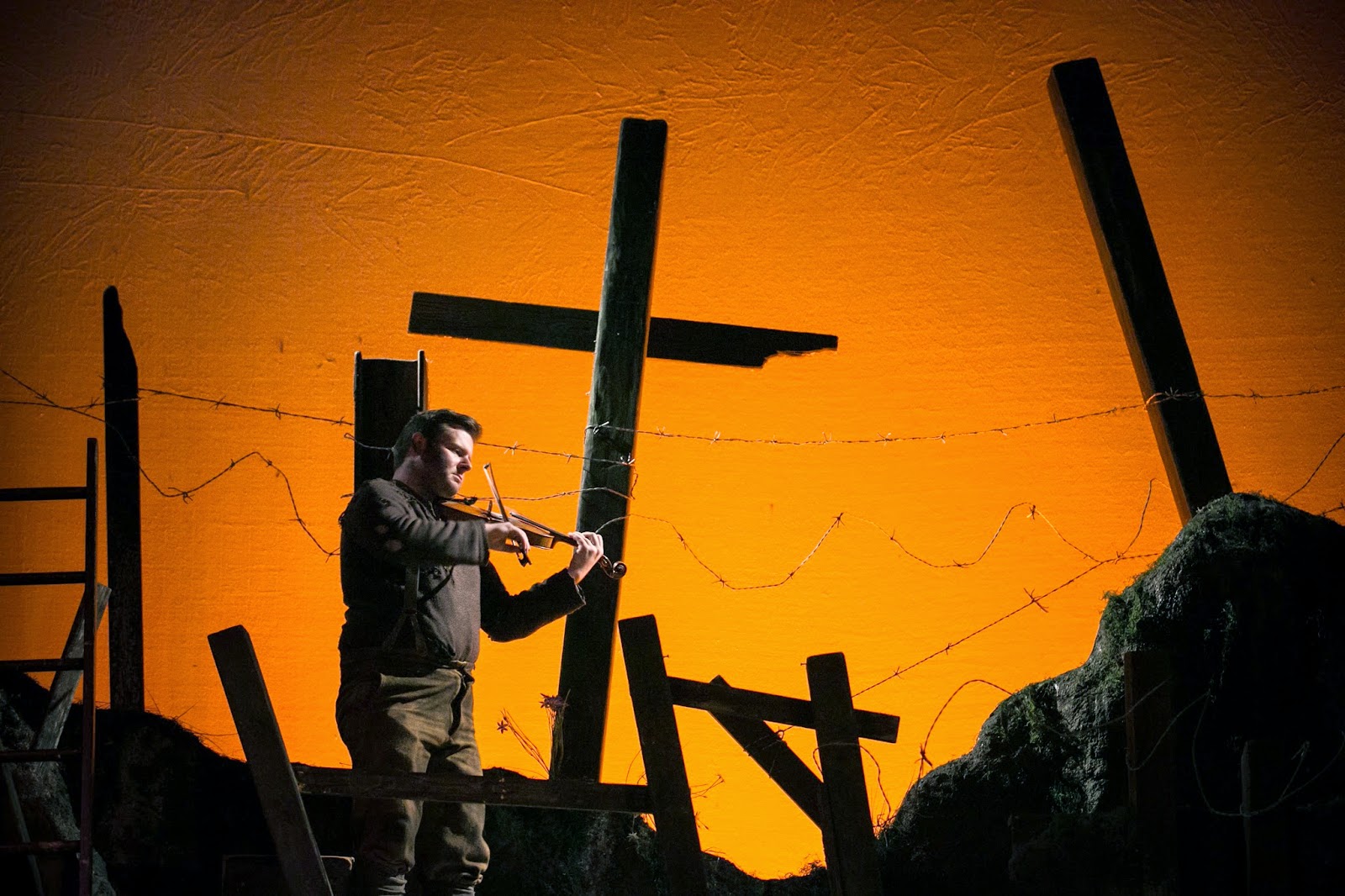 
Sebastian Faulk's Birdsong was on at Doncaster's CAST during the last week in May 2014.  The 1993 novel has been adapted on stage by Rachel Wagstaff who wanted to celebrate Faulk's masterpiece and his compassion for lives other than his own.  The current production ties in the centenary of World War I.  Wagstaff wanted to share the horrors of the war from all social angles especially from the soldiers' perspective - stories the Government at the time didn't want anyone to hear and instead instrumented patriotism propaganda!  The play first opened in the West End in 2012 and a UK National Tour followed in 2013.

The play is about a young soldier, Stephen Wraysford (played by George Banks) and his personal experiences fighting in France during the World War I.  There he falls in love with Isabelle Azare (played by Caroline Stolz) who is trapped in a loveless marriage.  The play is set between 1916-18, just before the first Battle of the Somme, which David Lloyd George, former Prime Minister, described it as the 'most gigantic, tenacious, grim, futile and bloody fight ever waged in the history of the war' (Birdsong Theatre Programme).  Wraysford also confronts the flashback memories including love from when he was in Amiens in 2010.  The first act concludes on the eve of the the Battle, 1916.


In the second act, the soldiers narrated their war experiences and how these affected their families and communities.  As well as Wraysford they shared what really mattered to them and how the war turns their and communities' lives upside down.  The circumstances beyond one's control show the realities of war and the big impact it had on the soldiers ranging from survival, betrayal, unwilling to let go, death and so forth.  The play gives a realistic picture how the past and present wars can do.  Only one can think of the modern day warfare such as the Vietnam War or the current conflict in Syria.  The characters, however, courageously held to their future hopes and aspirations.  Jeanne Fourmentier (played by Elizabeth Croft) share with the audience the metaphoric 'one room' and how it would be understood one day.  It came at an appropriate time when Wraysford raised his provoking thoughts about why they are fighting and it is worth dying for.  Each of the Soldiers also did their self analyses. 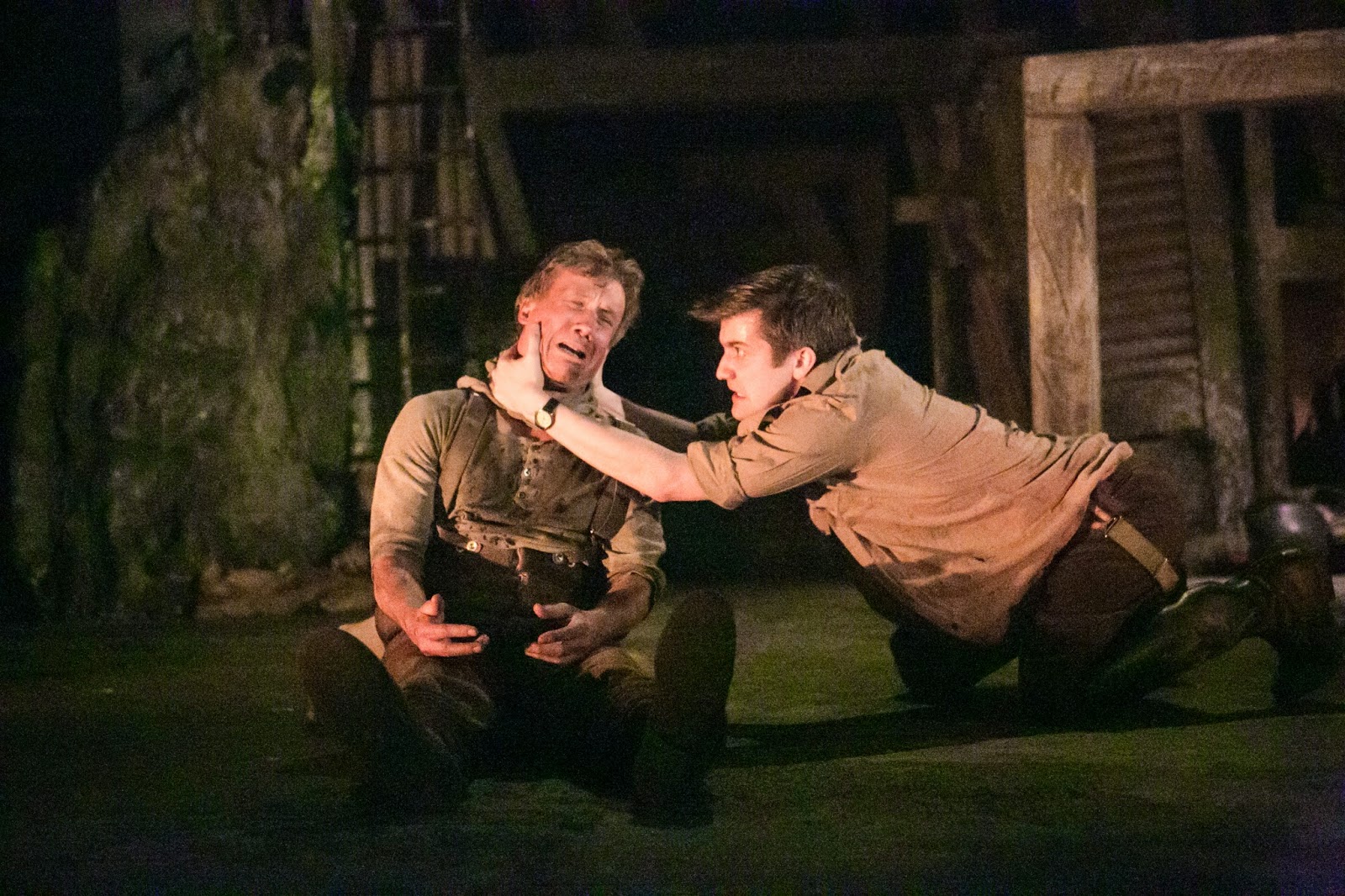 The Original Theatre Company's production under the direction of Alastair Whatley had put on an incredible, powerful and emotive drama.  One could feel the characters' sadness and strong emotions whatever adversities they faced either as a soldier or a member of the community.  The great sets, compliments of Victoria Spearing, gave a realistic snapshot of the war with its poignant cues such as the cross and enclosed spaces including its barbed wire war fronts.  The set links nicely with the dark and subtle lighting (Alex Wardle and Jenni Harris) which reflected the moods conveyed by the soldiers and circumstances.  Dominic Bilkey's sound choreographed the dramatic sounds associated with the story's themes.  Tim Van Eyken's accordeon music reminded the audience alongside the solo live violin music (played by Samuel Martin) the poignant and reminiscent moods.  A big round of thanks to an exceptional cast who did a great job! Through their acting, they reminded us of the war and its affects and how it affected and affects so many past and present.

Birdsong is an incredible and a very moving theatrical production.  The play is thought provoking concerning its relationship with the war and the people involved.  The centenary of when the first World War started will offer the opportunity to one and all to reflect and ponder what really happened and how the war shaped the political and social landscape forever!  The production is currently touring and details can be found on the website.