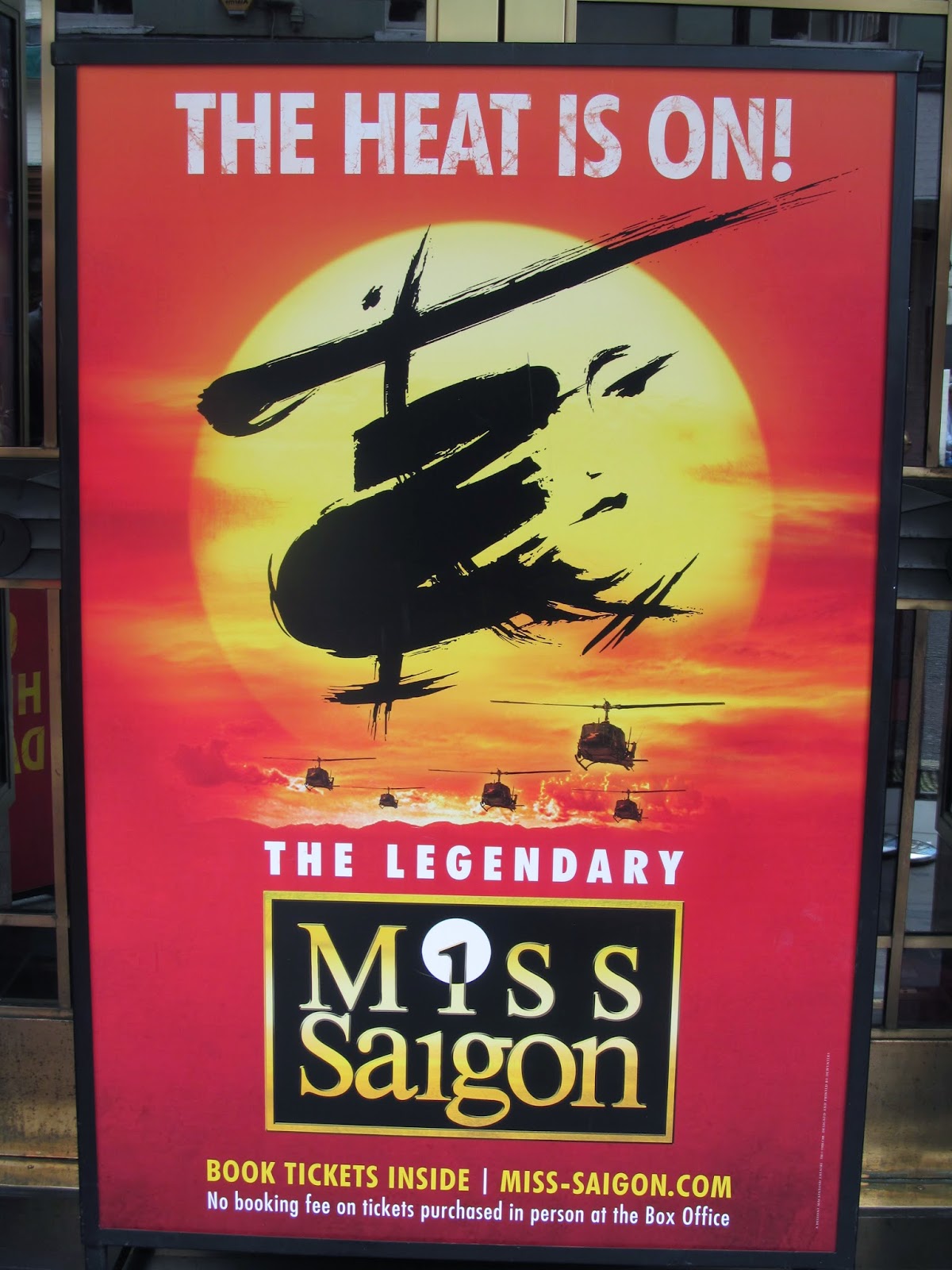 The Heat Is On!


I was delighted to have learnt that Miss Saigon was going to land again in London's West End from May 2014! I saw the original production twice in 1996 and 1997 at Theatre Royal Drury Lane.  I was saddened that the London production eventually closed but I however caught it on two UK Tours, Manchester in 2001 and Bradford around 2005. 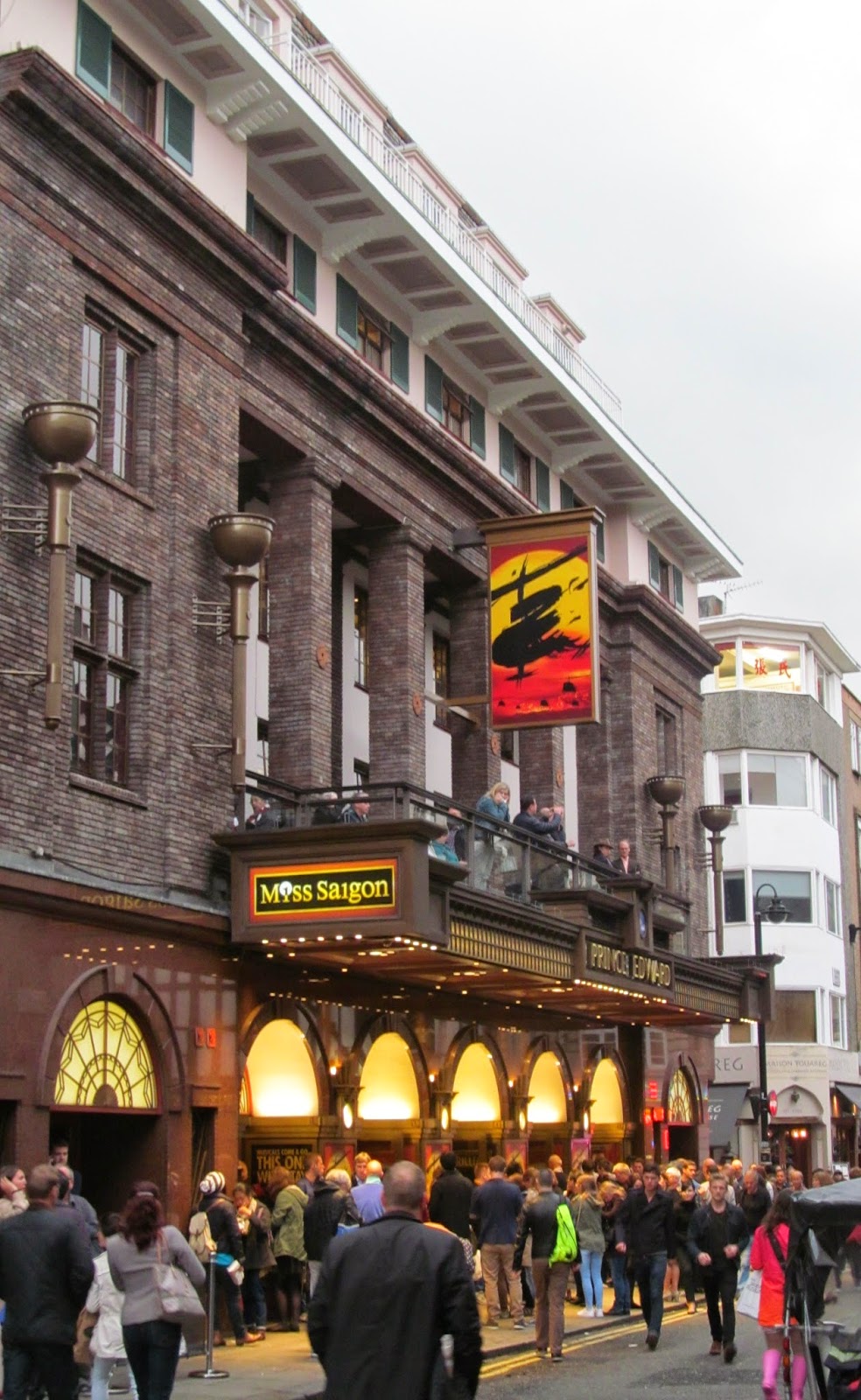 
The reception form its fans and theatre goers indicates how much Miss Saigon was missed and that the return visit was more than overdue! Tickets are selling very fast so I, alone, was fortunate to have got a ticket for an evening performance midweek at the end of May! So the heat is on! 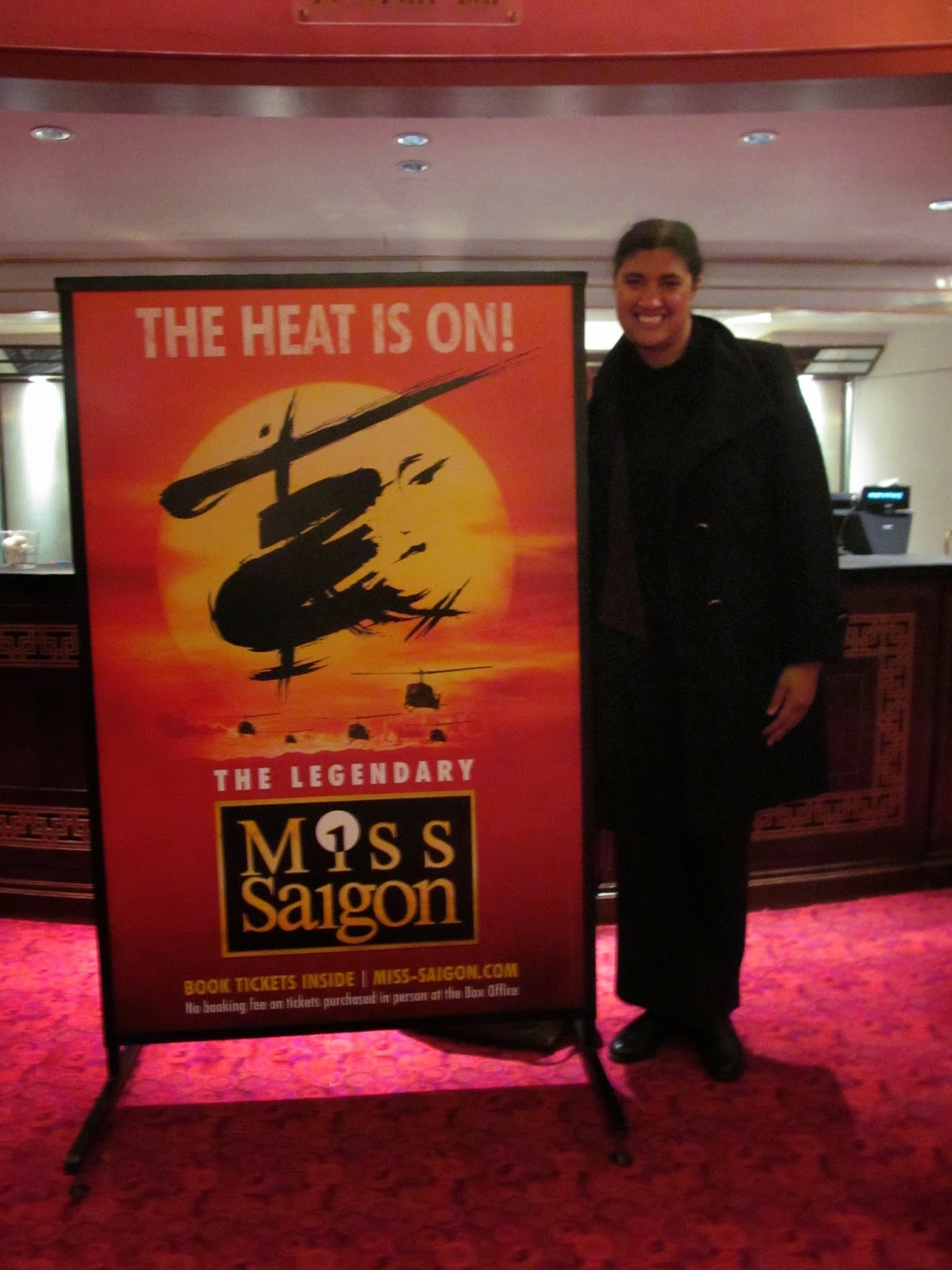 Posing after the show!

Bob Avian's original staging has been inspired by Totie Driver, Matt Kinley and Adrian Vaux (1936-2012).  The staging is enhanced by Bruno Poet's lighting and Mick Potter's sound design.  Potter is known for his work in a number of Phantom of the Opera productions.  The sets, though more simplistic and modern, tells the moving story effectively.  Luke Hall's projection co-ordinated the retelling of Miss Saigon which fulfills the requirements expected for a 21st Century production but not compromising the show's vision.

From Alfonso Casado Trigo's opening overture I was amazed and moved from beginning to the end! Having already been familar with the musical numbers I appreciated them much more now and also aware of its messages.  I saw the principal cast including Connor Mason as Tam.  The highlight was seeing Jon Jon Briones as The Engineer.  His performance and narration brought humour as well as poignancy and shared with us his scheming ambitions and adulterated dreams.  Briones has a charasmatic presence in The Heat Is On, If You Want To Die In Bed, What A Waste and the ever popular The American Dream.  Rest of the cast were amazing; Eva Noblezada (as Kim), Alistair Brammer (as Chris), Tamsin Caroll (as Ellen), Hugh Maynard (as John), Kwang-Ho Hong (as Thuy) and Rachelle Ann Go (as Gigi). 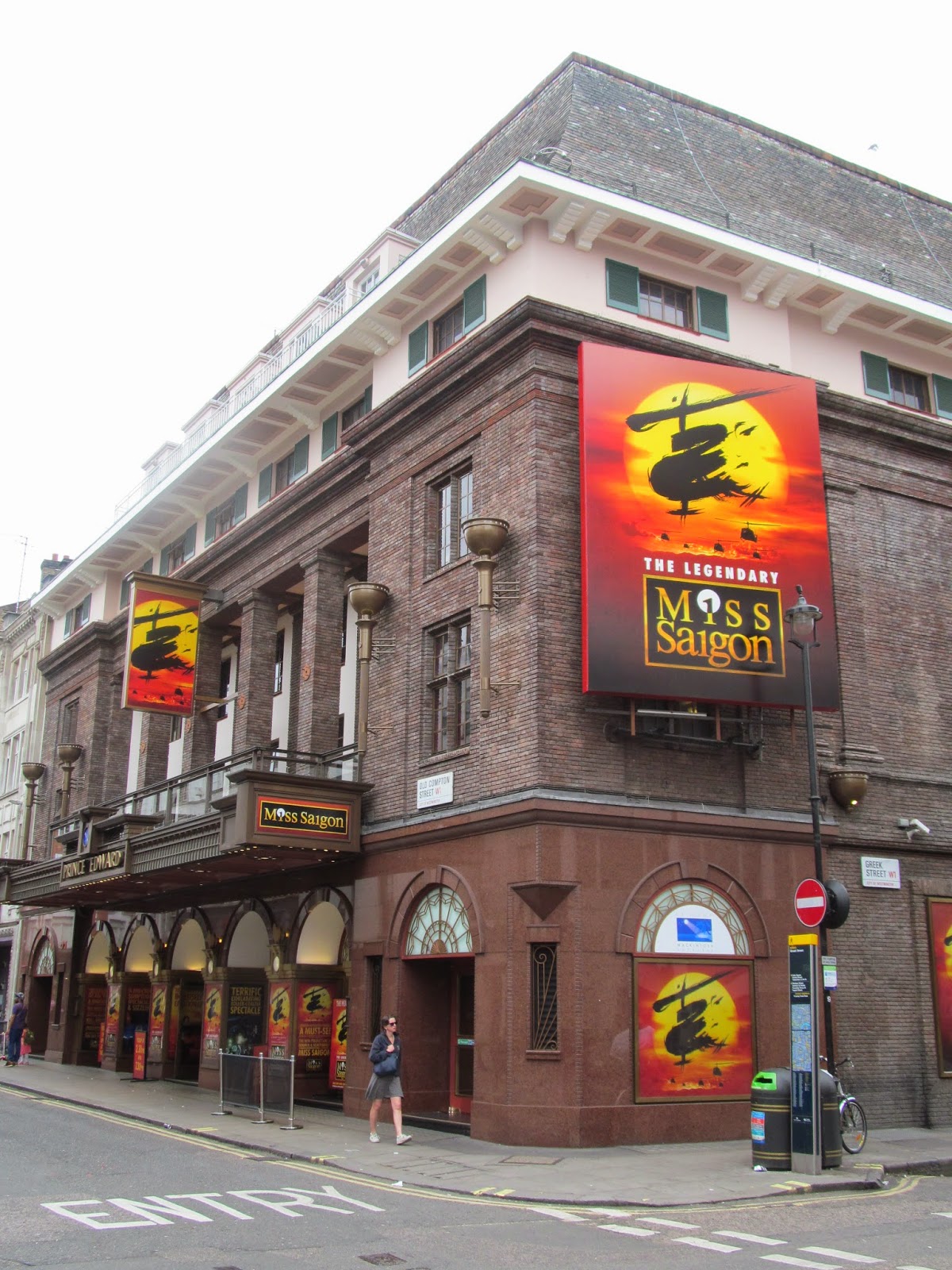 Miss Saigon is in similar vein to Puccini's Madame Butterfly.  Unlike Puccini's view of Sailor Pinkerton, Chris is viewed simply another victim of the war.  Miss Saigon explores how cruel war can be with unforseeable events affecting one and all including lovers, children, families and livelihoods through love and separation.  Kim, however, kept of believing in hope even if she was aware of the sacrifice and hardship she had to face and encounter.  These situations aren't different today which many similarly face in war torn countries.  They face the dangerous and perilous journeys whether physically, mentally, emotionally and figuratively in order to give their families a better life. 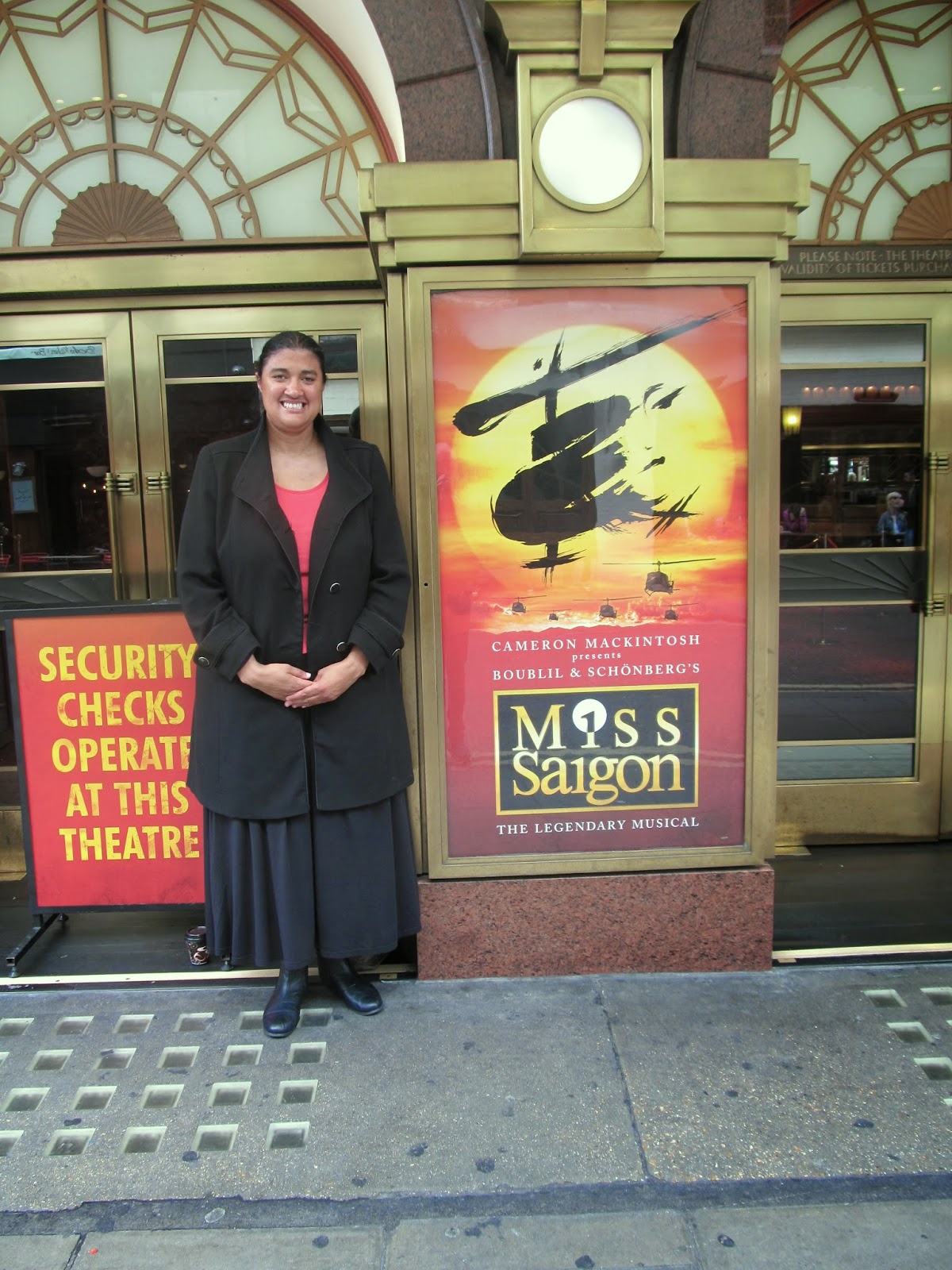 
I had a great evening seeing my now favourite musical at the Prince Edward Theatre.  The hear is now on in Soho.  Miss Saigon was, is and will be an instant hit now and indefinitely! I look forward to seeing Miss Saigon again real soon!