'There's a moment when the orchestra breathes the forest into life.
Somewhere a powerful primeval force is woken from sleep' - Opera North 2013 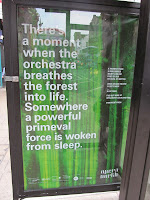 The festival celebrated the centenary of Britten's birth.  This year he would have celebrated his 100th birthday.  Opera North organised this festival and it's special to the company because of its founder, Lord George Harewood, was passionate about Benjamin Britten and supported the composer's professional and personal life.

To be honest I haven't heard much of Britten and his music.  Curiousity had got the better of me to take the opportunity to book a couple of operas including A Midsummer Night's Dream at the Leeds Grand Theatre.

I usually choose Shakespeare's tragedies over comedies.  However I was interested to see how this comedy is done in an opera format.  The text was written by Britten and Peter Pears based on the Shakespeare play.  This production is directed by Martin Duncan and choreographed by Ben Wright and the opera is done in three acts.  Unlike the play the synopsis focuses exclusively on the characters' activities in the woods.  There are familiar characters such as Oberon (James Laing), Tytania (Jeni Benn), the young couples (Hermia-Kathryn Ridge; Andrew Glover-Lysander; Sky Ingram-Helena and Quirijn Delang-Demetrius) escaping from Athenian Society and workers (Quince-John Savournin and Bottom-Henry Waddington) rehearsing a play; and the magic casting Puck (Dave Abelson).

Britten's opera was beautifully conducted by Stuart Stratford.  I adored the use of percussion including the xylophone that was played throughout the performance.  Jonathan Keates discussed that Britten was fascinated by the characters in A Midsummer Night's Dream and that he cleverly composed unique forms and styles musically to reflect the diversity and unique identities of these Shakespearean groupings (Keates, 2013, p.60).  I could tell the music was influenced by his travels in Far East Asia.

The impressive staging designed by Johan Engels was complemented by Bruno Poet's lighting.  The creative team and crew have put on a successful opera as well as the talented cast.  It was evident how well the opera was received from our cheers and applauses on the evening!

I appreciated A Midsummer Night's Dream a lot more than before.  What is important were the messages which Shakespeare and Britten were getting across to everyone.  I also understand why Britten and Pears wrote the libretto the way they did.  Combining my personal thoughts and reading the articles by artists/art professionals in the Opera North Festival Britten programme (co-ordinated by Stuart Leeks), I came to a comprehensive contextual understanding of Britten's opera.

I felt the main messages in the opera were focusing on gender, sexuality and society and its portrayals whether during Athenian Society, Elizabethan and Shakespearean era or today in the 21st Century.  Gavin Pumley discussed that Britten had mixed crucially 'the Arcadian ease of the Shakespeare ritual with the unconventional love and its acceptance in a modern society' (Pumley, 2013, p. 51).

The opera was first performed in 1960, a time when big social changes were soon about to take place.  With hindsight Britten must have been aware and this could have influenced him whilst he composed the opera.  Plumley continued with this thoughts and said it reflected 'some of the mind-bending narcotics and social change that were central to the decade's history' (Pumley, 2013, p. 52).  He considers that the British Midsummer, traditionally celebrated by pagans, is 'a feast of changing perceptions'.  Plumley concluded that the play is perfect for the disparity to be established between the groups and its intricate actions (Pumley. 2013, p. 52)

Another thing to note is that Britten composed this opera for a journey of self discovery through ambiguous humane and societal circumstances and his 'forest in the dream' (Pumley, 2013, p. 53) is used as a metaphor for his journey to happen in reality too.