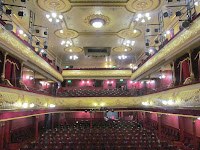 I've booked myself one of their Public Heritage Tours which are hosted the venue's creative learning team.  We had a very interesting tour of this beautiful Grade II venue including a return visit to backstage and stage.  I remember my last visit backstage during the Heritage Open Days in 2012 when I paid a visit to the City Varieties Music Hall.  It was nice to view the the empty auditorium from the stage and admire the interior decor including the  gold plated decorations.  It was also nice to sit in the stalls, dress circle and upper circle whilst  listening to the City Varieties Music Hall's interesting and rich history, which goes back to its humble days of 19th Century where it began its Music Hall history. 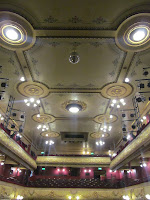 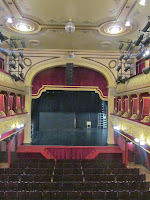 I was interested to note the royal crest at the cornice above the stage's curtains.  Apparently, the City Varieties Music Hall, at the beginning of the 20th Century, was visited regularly by King Edward VII and the venue must have met his approval.  He would hire a box, very near to stage and albeit unseen, to see Lily Langtree perform on stage and sneak backstage to visit her at her dressing room.  He often visited the venue en route to his weekends away at Harewood House, stately home in North Leeds. 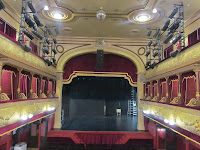 History of the Leeds City Varieties

It was built in 1865 and today is only one of a few surviving Victorian music halls built around that time.  It was originally called Thornton's  New Music Hall and Fashionable Lounge by Charles Thornton (Thornton arcade is named after him).  There was a Singing Room above the Swan Inn and was very popular with the locals especially of the working class and it was subsequently renamed City Palace of Varieties.  The Music Hall is famed for The Good Old Days, a BBC television programme, which ran for 30 years and still hosts live theatrical shows twice a year.  Many celebrities of the entertainment industry have performed at the City Varieties.

The City Varieties had a successful major refurbishment and restoration which Heritage Lottery funded and the venue closed between January 2009 and September 2011.  Today it seats 467 and some of the balcony section are now permanently cordoned off for the additional stage lighting.  The White Swan serves as a perfect pre and post theatre meeting points as both venues are linked.

City Varieties have kindly let me share some of their photos of the music hall prior to the 2009 refurbishment:

I've seen some great productions there and hope to see more in the not too distant future.  Here's the link to the City Varieties and they can be liked on Facebook (City Varieties Music Hall) and can be followed on Twitter: @CityVarieties

Please check out my previous blog of a past visit to the City Varieties during 2012 Heritage Open Days.