There's a moment when the audience realises the artist
has found his muse and cannot leave,
despite the city sinking into death and disease - Opera North, 2013 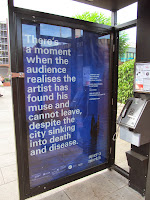 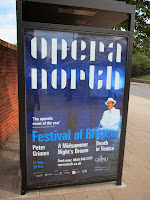 
The second opera I saw (as part of the Festival of Britten) was Britten's final one, Death in Venice which premiered at The Maltings, Snape, in 1973.  I never heard of Death in Venice until seeing Luchino Viconti's film.  I learnt from watching the movie that it's necessary see it not at face value.  Underneath the Venetian beauty there are thoughts which may contradict the city's mainstream perceptions and societal attitudes.  It's a test to how one in society really sees aesthetic beauty whether it's prescribed or described.

The opera is one of a very few I've seen that has reached the depths of my soul and appreciate the deep feelings of Gustav Von Aschenbach (Alan Oke) experienced which were raised and I know it directly and indirectly affects every one of us in society.

The libretto is written by Myfawny Piper based on Thomas Mann's novel.  The incredible production is directed by a talented creative team originally led by Yoshi Oida.  The team includes Tom Schenk (Set designer), Richard Hudson (Costume designer), Paule Constable (Lighting designer) and is renowned for her work in the award winning National Theatre's The Curious Incident of the Dog in the Night Time) and the revival director, Rob Kearley.

I was in awe with its simple sets and perfect for telling such a complex story like Death in Venice.  There were a variety of themes explored in the opera's two acts such as travel, escapism, perception of arts and beauty, sexuality and Greek philosophy.

Britten used his musical genius to capture the unearthed beauty of Tadzio (Emily Mezieres) and Von Aschenbach's ongoing deep thoughts, feelings and philosophical views which assisted his anxieties and obsessions.  The 'voices' of Apollo and Dionysus (James Laing) represented the Greek philosopher(s)' definition of aesthetic beauty and art which guided Von Aschenbach thoughts of Tadzio.

Since the 1940s, Britten had the desire to do this opera based on Mann's novela because of the themes explored. Over 30 years later, with connections with W.H. Auden, he would finally write his final opera which was crucial to him and his partner, Peter Pears.  It's suggested that the themes declared to Britten's personal life which gave him the impetus to compose Death in Venice.  Mervyn Cooke discussed how deeply the composer felt about the story and the deep impact it had on him.  Cooke stated the story being 'hauntingly poetic' and 'the exploration of fundamental issues' (Cooke, 2013, p. 79).

There are definite close parallels between Mann's Von Aschenbach and Britten such as the ambiguous sexuality, innocence, the contrasts of artists' opinions between intellectual views/prescribed approaches and Romanticism/Sensual liberty (Rees, 2013, p. 86 and Cooke, 2013, p. 79).  Both travelled including Venice as a 'necessary evil' as both experienced a 'creative block'.  Britten sought creative inspiration whilst he was abroad (not just in Venice) which was right for the issues raised in Death in Venice (Cooke, 2013, p. 80).

Philip Reed concluded in his article what Death in Venice along with his operas 'offer a representative cross-section of his theatrical interests' (Reed, 2013, p. 71) and I dare say I agree! So glad I had the opportunity to have see two operas composed by the legendary composer.