West Side Story - A Timeless Musical! 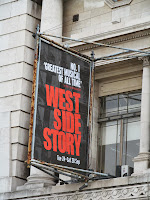 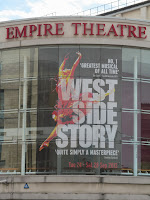 I've seen West Side Story back in 1996.  A local amateur company performed the musical at my local theatre.  I don't remember much about the performance but thanks to the movie I remembered the great musical score by Leonard Bernstein, the lyrics by Stephen Sondheim, and the incredible choreography and dancing which Jerome Robbins originally conceived.

We had Katie Hall as Maria (I've seen her as Christine on The Phantom of the Opera UK Tour 2012/13 and Dom Hudson who stood in for Louis Maskell as Tony.  I thoroughly enjoyed their performances along with the other principals, Djalenga Scott (Anita), Javier Cid (Bernado) and Jack Wilcox (Riff).

I was mostly impressed with the incredible and breathtaking dancing and how this choreographed perfectly throughout the show.  Looking at the cast's biographies, most of them are accomplished dancers and no doubt their talents shone through on the stage.  The dancing told the story as much as Sondheim's lyrics.  I think West Side Story comes across as such as an innovative modern dance production as well as a legendary musical.

West Side Story, written by Arthur Laurents, is a tragedy based on Shakespeare's Romeo and Juliet.  The lovers are related to two separate gangs who notably have a deep hatred for one another.  Not only the story is based on the love of Tony and Maria there is the background of racial prejudice, social deprivation and general ignorance especially from the city's authorities who had their own prejudices. My friend and I had an interesting discussion about the social and complex messages raised from the show.  What is not tolerated today was acceptable in the 1950/1960s and some issues such as segregation, the prohibition of mixed marriages and so forth were then legally and socially supported.

Through the singing and dancing, disillusion was expressed in America by the Shark Girls who dreamed of a better life in America but only to have expressed reality of contrast.  The Jets demonstrated a lack of respect for the authorities in Gee, Officer Krupke and indicating juvenile delinquency.  West Side Story can relate to a lot of social issues of today as much as when the musical was created nearly 60 years ago.  Joey McNeeley, the current director, said that stories of racism leads to tragic consequences and how ignorance and prejudices can deny what many people yearn for, love and peace.
West Side Story has something for everyone: A tragic love story; the incredible dancing and it's amazing choreography; and the social messages of importance today.  I look forward to seeing West Side Story next year when it comes to the Leeds Grand Theatre.
Posted by Dawn Smallwood at 13:02