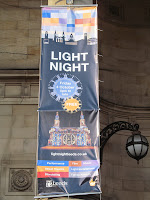 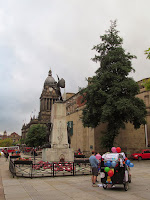 I participated in my first ever Light Night! It's an arts event held annually in Leeds and where many buildings open their doors in the evening showcasing a variety of art projects from performance to light installations. 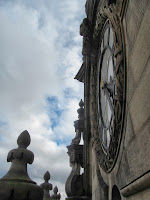 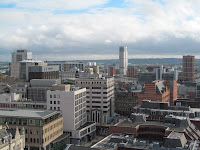 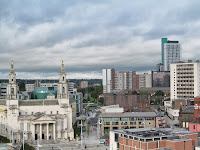 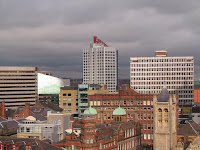 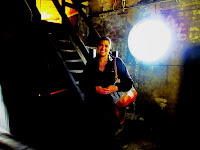 Just before Light Night began I climbed up Leeds Town Hall's Clock Tower. I had to book at ticket in advance as it's very popular to do!  A bit about the Leeds Town Hall:  The Victorian building was designed by Cuthbert Broderick and built in 1858 (further works were down for another 9 years!).  The Town Hall originally had four court rooms (used until 1992) and prison cells.  Today, it's a working building for Leeds City Council and used for civic events and celebrations.  It was worth the steep climb of 200+ steps for the great views across Leeds.  Afterwards we descended and soon Light Night officially began! 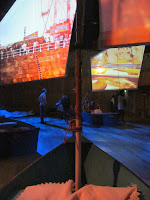 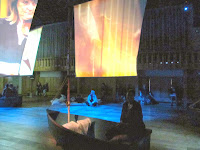 Another highlight was checking out the Sea Interludes Installation at Howard Assembly Room.  What an incredible installation project! There is this fortilla of boats which you "sail" in while you listened to Britten's Four Seas Interludes from his opera, Peter Grimes.  I loved how the music projected with the image visuals on the sails.  I also loved how the soft but effective lighting portraying the sea and the atmosphere. I spent some considerable time there capturing the mood of the installation and being part of the Northern Seas.  I plan to make a return visit to the installation later on in the month.

My favourite project was the Momentus Illuminos at the Leeds Civic Hall on Millennium Square.  The building was transformed to a large Potts Clock Face with cogs, levers, chimes.  Whenever the clock chimed every quarter hour, video footage was shown of mechanic people celebrating and getting on with their daily lives in Leeds via movements.  The projection was accompanied by a soundtrack of the clock moving, whirring and chiming.  When the clock struck, music accompanied the mechanic people's activities.  Seeing this amazing illumination made me realise how proud I am of Leeds! 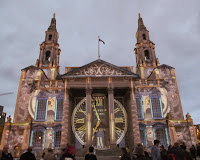 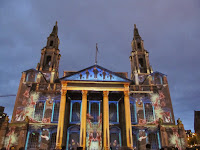 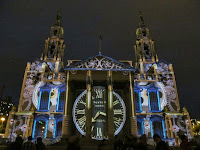 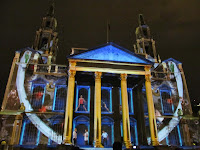 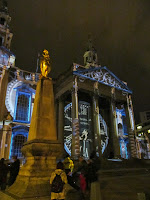 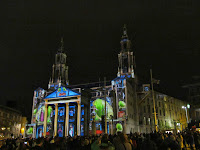 I've checked out some other arts projects.  As much they were innovative and interesting they weren't to my personal taste! Light Night is a great opportunity to celebrate Leeds culture and heritage.  It's an opportunity for Leeds residents and visitors to the city to enjoy what the city has to offer!