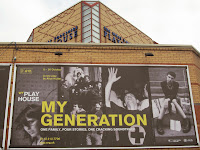 I was very excited seeing this play, set in Leeds and written by Alice Nutter.  I was interested to see how life, especially in a political and social context, was lived by those who pursued an alternative lifestyle than to the one that is commonly associated.  Many misunderstood their beliefs and disapproved their lifestyles. 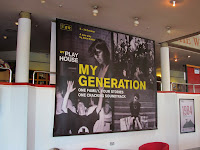 My Generation spans over 40 years of political and societal events from 1970s up to 2013.  The stories are told by one family and at specific times where a lot of events happened and developed/affected the cultural/social and political landscape.  Four members of the same family tell their stories chronologically.

The story of Cath (Kaye Wragg) highlighted 1977 amidst the Yorkshire Ripper Murders and the rise of Radical Feminism with which she challenged her partner's role within the squat.  It was nice to hear of the Neighbourhoods I know so well, such as Chapeltown, when Cath and Frey (Helen Bradbury) had a ride out.

Mick (Craig Conway) played a pivotal role in supporting the miners' strike during 1984/85 and supported the miners at the picket lines.  The comment Mick made reinforced his belief that many in the mining communities with pit closures would destroy the community and life round the pits despite eventually feeling apathetic about the strike.  This reiterates what Alice Nutter said about that the fight is for the ordinary human beings.

After the interval, we heard Ben's Story (Craig Gazey).  His passion for partying through his experiences of raves including the last free music event at Malvern Hill before large gatherings without a license became illegal.  I was interested hearing the references to techno and its subculture which I knew through its music in the 1990s and the party drugs that were available at the raves.

Finally we hear Emma's Story (Helen Bradbury).  Her story is a very familiar one today.  In 2013 there is still the ongoing economic crisis and cuts to public services affecting families.  She saw families queues at pawnbrokers, a common sight today, and I noticed the lack of community cohesion in comparison to when she was growing up in a communal home.  It seems to be Emma is disillusioned with the present as much as the past.  She's striving for a lifestyle for her and her family, despite the set backs, and is ambitious especially for her daughter and ensures she's well provided.

At the end it was nice everyone to be reunited.  The family and friends who were associated with them since the 1970s got together and had a sing along.  It was very heart rendering to hear them sing with optimism for the past, present and future despite issues.

What Alice Nutter achieved is ensuring the audience is listening to the stories firsthand by those who lived the lifestyles.  Before the play I took some time out to see a photo exhibition by Andrew Bannerman-Bayles and Andrew Medcalf.  The exhibition is curated by East Street Arts.  The photos told me of a story parallel to My Generation about those living an alternative lifestyle and fought to what they believed and not scared of being themselves!

I thoroughly enjoyed this play.  It was nice to hear the stories told by those who I haven't heard from mainstream society, media and so forth and obscured with their negative references about them.  It was important to have learn their aim is about 'ordinary people struggling to be human' (Nutter 2013) and being 'free' without restraint.  Their wish, which I think is very commendable, is to have helped those who have suffered marginalisation and misrepresentation because of not agreeing with the Status Quo.  With West Yorkshire Playhouse support, Nutter reckons, in an interview with Steve Bottoms, that James Brining, the artistic director, is looking for plays which are told by different communities.  I personally welcome this as this enables me to appreciate more the different communities in Leeds with their diverse cultures and interests whether politically and socially.  Also how this shaped the city which I'm very proud of over the past forty years.  I always believe there are at least two sides of the story, which one needs to be aware of about the development, culturally and politically by all.

A big thanks to talented cast especially the younger members which were played by the Blue Team (Hannah Kilcoyne, Thomas Gould, Hannah Kerr and Leo Mercer).  My Generation is blessed with an fantastic creative team including Harry Hamer, musical director/composer and who was in Chumbawamba with Alice Nutter, Max Webster (Director), Ben Stones (Designers), Charles Balfour (Light Designer) and Ian Trollope (Sound Designer).

My Generation is on at the West Yorkshire Playhouse until the 26th October 2013.
Posted by Dawn Smallwood at 12:47