I've booked to see two of the 2012/13 Phantom Cast final performances on the evenings of Friday 30th and Saturday 31st August 2013.  For a big phantom fan, like myself, it was very emotional saying goodbye to the exceptional 2012/13 Phantom Cast.  From the performances on stage and meeting some of them at stage door, I've grown fond with the cast and enjoyed seeing them on stage 11 times during the year.

As well as seeing Phantom I made some new friends and especially grew close to Annie, Sheena, Alison and Emma.  Thank you guys for the great times and also for your support during the not so great ones! I'm eternally grateful.

I'll miss those who have left the company including Marcus Lovett, Nicola Rutherford, Simon Thomas, Louisa Lydell, Gareth Snook et al.  It will feel strange not seeing them at future Phantom performances.  I wish them the very best in what they do next and in the future.  However I'm very pleased that Scott Davies, Lara Martins (staying on for a bit longer), Sofia Escobar, Antony Hansen and Olivia Brereton are staying on.  With the new cast members I'm looking forward to seeing and supporting them at Phantom.

A big thanks to my friends and cast for the emotional but phantastic times over the last weekend in August.  I'm now extremely excited about the new Phantom cast which I had a ticket for the first night (2nd September 2013).

A Personal Tribute to Marcus Lovett

The final performances of the 2012/13 included Marcus Lovett as Phantom.  It has been a very interesting phantom journey seeing him as Phantom on stage over the past 12 months.  I had the honour of seeing him 9 times in the role.  What I loved most about Marcus was the sheer determination and valiant effort he had put in his performances.  He really made the character of Erik unique and kept the spirit of him alive throughout the show and during his Phantom engagement.  He is a favourite for his unique interpretation of the role.

As much as this portrayal, I'll remember the kindness he has shown to me, my close friends and fans in general.  He is one of the nicest guys I ever met a stage door and his his incredible humility and warmth will be something I'll treasure for the rest of my phantom journey.  It's interesting to note that he was Phantom on Broadway in 1993, a year before I began my phantom journey.

His final performances were just as unique as the ones before with his 110% effort and commitment he puts in his role as Phantom.  I was glad to have had the opportunity to say goodbye to him in person and wish him the very best what he does next and in the future.  Thank you for The Phantom of the Opera, Marcus! 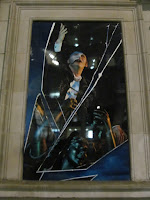 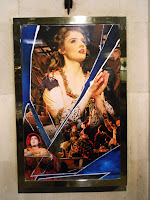 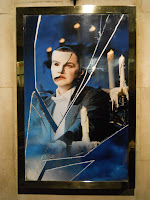 Phantom posters around Her Majesty's Theatre featuring one of my favourite ever Phantom and Christine pairings, Scott Davies and Anna O'Byrne
Posted by Dawn Smallwood at 14:03