I've heard about CAST, Doncaster's exciting new venue on the news.  The report about it was enough to prompt me to see something at CAST soon as it's opened.  I close The Glee Club, a song-filled comedy about a group of miners who like to sing.  The play is set locally in Edlington, South Yorkshire.  I personally could connect with similar communities with a proud mining history but in West Yorkshire.

I arrived at CAST just with enough time to collect my ticket at the box office before taking my seat for the anticipated play.  The Glee Club is written by Richard Cameron who was inspired by Frank Vernon's Pride and Poverty which linked memories of the Mexborough miners.  Cameron wanted to focus on the mining community as a whole in the play.

1962 was chosen for the play because it marked a time when music was facing a big change and how social attitudes began shifting through the Swinging Sixties.  The Glee Club explored the lives of six miners who were members.  The miners during the play began to involuntary questions community norms including relationships. gender, class and other social issues that mattered to them.  Colin (Brett Lee Roberts) was aspired to become a musician and convinced the audience that there's a life beyond mining.  It's likely that it was from listening to artists on the radio who came from the working class.

The issues raised in the play was the beginning of the dramatic social changes, which came in effect in the late 1960s, and how attitudes changed towards feminism, sexuality, relationships, individualism which were of contrast before.  It was a poignant reminder, at the time, how the changes affected the communities forever.  Today, there are community and voluntary organisations who are commissioned to work in partnership in the communities and ensure that community cohesion continues.  It is evident the cohesion still existed in the communities who supported one another in the miners' strike in the 1980s.

The cast of Richard Standing (Jack), David Westbrook (Phil), Martin Callaghan (Scobie), Tony Bell (Walt), Russell Richardson (Bant) and Brett Lee Roberts (Colin) were exceptional playing the members of the miners' Glee Club.  Each actor did a great job portraying the individual personalities and the encounters one faced in their lives. Colin (Brett Lee Roberts) gave an insight into the play with his narration.  Also a big thanks to the production team including the direction by Esther Richardson.

The Glee Club shared with us an insight of how the mining communities share and celebrate their heritage and social history through music and singing at their local club.  The singing reflected to me how the miners looked and looking at life amongst the changes such as Que Sera, Sera...whatever will be, will be and You Always Hurt The One You Love. 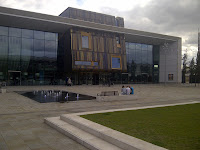 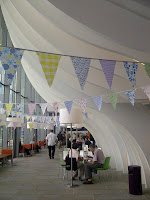 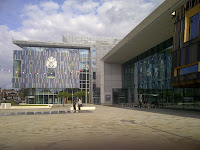 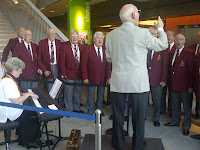 The CAST opened in September 2013 in Waterdale, Doncaster's Civic Quarter.  The new venue will increase Doncaster's profile for the arts and this welcoming building no doubts offer something for everyone.  CAST is ambitious through spreading the word far and wide and urging one to be a #cast of 1000s.  I hope the CAST will no doubt inspire the town with the opportunities the venue will now offer.  Please check the website for their forthcoming productions.
Posted by Dawn Smallwood at 15:01