I first saw The Barber of Seville in January 2004, an Opera North production, which I thoroughly enjoyed.  Following from this I naturally had high expectations that this production will be just as enjoyable it not more! 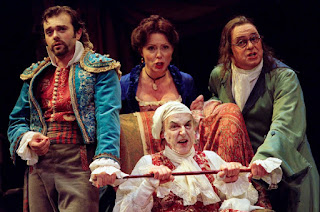 The Barber of Seville (Il barbiere di Siviglia in Italian) is an opera based on Pierre Beaumarchais's Le Barbier de Séville. The music is composed by Gioachino Rossini and the libretto by Cesare Sterbini.  The musical score is renowned for its greatness with its comedic elements and it certainly stands out unique.  It premièred in Rome in 1816 and hasn't looked back since! There were some characteristic links to Mozart's The Marriage of Figaro and Sondheim's Sweeney Todd.

One can't help falling in love with its music, particularly the overture, and the English translation does not compromise the opera's spirit.  It's about Rosina and a young Count who have fallen in love.  Doctor Bartolo, Rosina's guardian, is not happy with the situation and does his best to get in the way of their love.  With hilarious and witty story twists and repercussions along the way  and help from tongue in cheek and witty Figaro and bribe accepting Basilio, Rosina and County marries.  In the end true love reigns and comically all ends well.

We had understudy for Rosina with which the artist more than excelled in the role and laughter reigned in the audience with outstanding performances from Nicholas Watts (Count), Gavan Rang (Figaro), Alastair Miles (Basilio) and Eric Roberts (Bartolo).

Russell Craig's traditional setting and costumes are unique with primary focus on the Dr Bartolo's home and Figaro's barbers underneath. It feels like a "theatre in a theatre" with guests sitting at both sides of the stage watching the story unfold and is assisted with curtain drops and backstage activity.  Even at the interval young boys were bringing in hot pasta, assumed for the guests.  The staging and direction has a down to earth feel and all supported by Opera North's orchestra and its conductor, Stuart Stratford.

Certainly one of the best operas I've seen on my opera going journey and I can't recommend this production enough.  A great review here from The Reviews Hub on its production's press night.

Please check out Opera North for more information on this production and also schedules and prices.